With the stock market rallying to its 61.8% retracement, our medium term market studies are mixed. They are no longer consistently bullish. And while the odds favor a pullback/retest right now, it is not impossible for the market to go higher before making a pullback/retest.

Meanwhile, the economic data is mixed. This means that while long term risk:reward favors the downside, there is still the possibility that the stock market will make new highs.

While the bull market could keep going on, the long term risk:reward no longer favors bulls. Past a certain point, risk:reward is more important than the stock market’s most probable long term direction.

Some leading indicators are showing signs of deterioration. The usual chain of events looks like this:

Let’s look at the data besides our Macro Index

The inflation-adjusted net value added of nonfinancial corporate business is trending sideways. This is a typical late-cycle sign.

This is not an immediate long term bearish sign for the stock market and economy. But if this persists, long term bulls really need to be careful.

The Unemployment Rate is very low, and is starting to tick upwards. 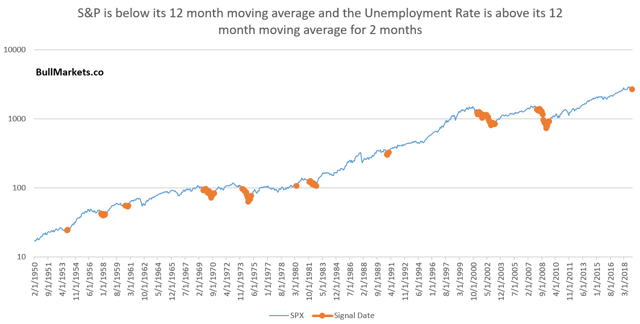 Here’s what happens next to the S&P 500 when Consumer Confidence falls by more than -18 over the past 4 months, while still above 100 (i.e. late-cycle)

Conclusion: The stock market’s biggest long term problem is that as the economy reaches “as good as it gets” and stops improving, the long term risk is to the downside.

Economic deterioration is not significant yet, so the “bull market top is in” case is not that clear right now. We’re in a “wait and see the new economic data” mode. But if you are a buy and hold investor, now is bad time to buy stocks.

There will be a flood of economic data over the next few weeks now that the government shutdown is temporarily over.

*For reference, here’s the random probability of the U.S. stock market going up on any given day, week, or month.

Our medium term market studies are mostly mixed. However, >50% of them point to the high probability of a pullback/retest.

Many traders are wondering “will a pullback/retest even happen, now that the S&P has rallied so much”?

As we stated on Friday:

Yes, it’s true that most of these 15-20% declines are followed by a pullback/retest at the 50% retracement level.

HOWEVER, not all of them do. A few are followed by a pullback/retest after the S&P has rallied even more

Here are the historical cases.

*All charts from StockCharts

The stock market crashed and retraced 48% before retesting in 2011. The S&P was under its 200 dma

The stock market crashed and retraced 59% before falling to new lows in 1973. The S&P was above its 200 dma

The stock market crashed and retraced 33% before retesting in 1967. The S&P was far under its 200 dma

The stock market crashed and retraced 42% before retesting in 1962. The S&P was far under its 200 dma

The stock market crashed, rallied to almost a new high, crashed even more, and then rallied straight to new all-time highs.

The stock market crashed and retraced 50% before falling to new lows in 1930. 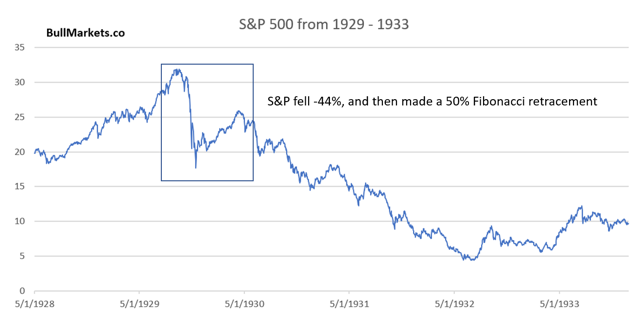 So what is the point?

“Crash, rally, pullback/retest” patterns come in all shapes and sizes.

While most of the pullback/retests happen at the 50% retracement level, a few of them occur only when the S&P is near all-time highs.

So despite the nonstop rally, a pullback/retest is still likely.

While no one knows for certain if the S&P will make new all-time highs, VIX is likely to trend higher. Historically, VIX and the S&P both trend higher at the end of a bull market. Stock market tops are very volatile, with massive up and down swings.

While this isn’t necessarily bearish for the stock market, it’s a medium term bullish sign for VIX itself.

Here are similar historical cases, and what the S&P did next

You can see that a lot of cases are overlaps, so let’s only look at the first case in 1 month.

This is not consistently bearish for stocks, even though the sample size is small (n=5)

Such reversals are rare. From 1950-present, these marked the bottom of massive 50%+ bear markets.

But before 1950, this was more bearish than bullish (i.e. happened within massive bear markets)

Seasonality favors stocks in 2019. There’s a common saying “as January goes, so goes the rest of the year”.

Here’s what happens next to the S&P when it goes up more than 7% in January.

As you can see, stocks tend to go up 6 months later. But remember: seasonality factors are of tertiary importance. Seasonality can break at any time.

The “risk-off” move in January 2019 is encouraging. Risky assets like stocks and oil did well, while safe haven assets like the USD fell.

Historically, this happened 4 other times. This kind of price action has been consistently bullish for stocks 6-12 months later.

As of Thursday, the S&P is now more than 1 standard deviation above its 50 day moving average, for the first time since October 2018.

Historically, this was bearish for the stock market 2-3 months later 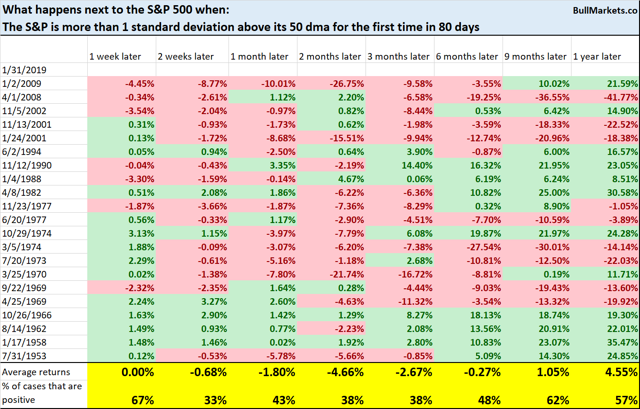 REIT’s are massively outperforming the stock market right now. From 1999-present, this only happened during the 2000-2002 bear market 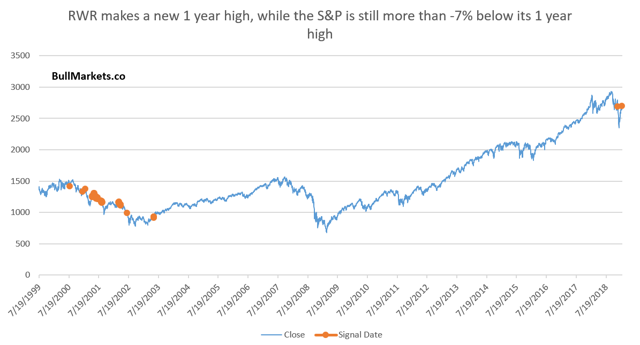 As of Tuesday, the S&P was above its 50 dma for 8 consecutive days, for the first time in 3 months. 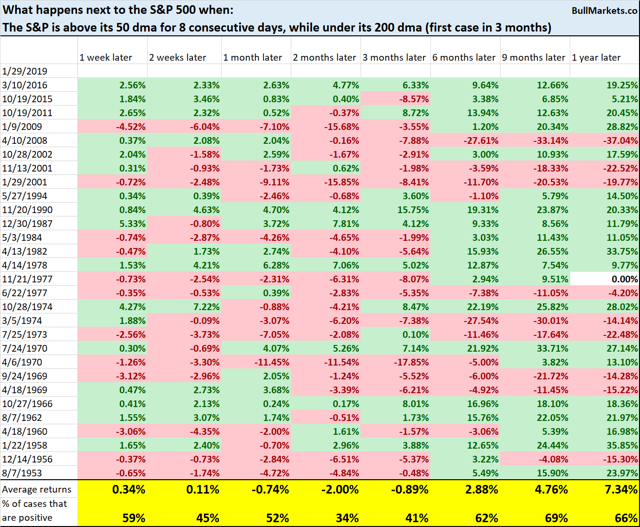 This is neither consistenlty bullish nor bearish for emerging markets 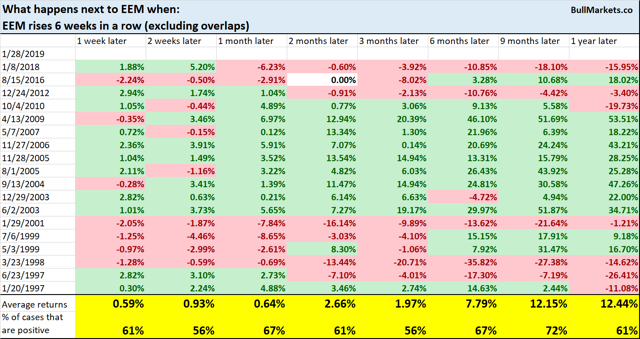 The short term is extremely hard to predict, even when you have an edge. Many random and unpredictable factors impact the short term. That’s why we focus on the medium-long term and mostly ignore the short term.

Out of the “best 6 months of the year” (November – April), February is the worst. 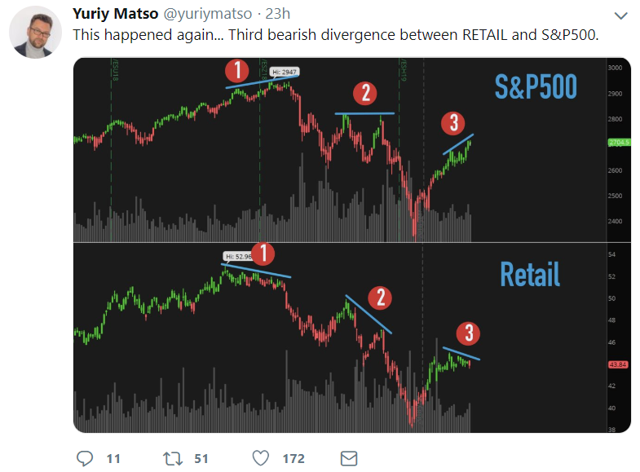 Is this a bearish sign for stocks? Or is this just an example of recency bias, something that all humans (including you and I) are prone to?

It seems that these “divergences” have no consistent impact on the stock market. Sometimes bullish, sometimes bearish. Overall, not much different than a coin toss.

Here is our discretionary market outlook: