Ripple (XRP-USD) is trading in the narrowest of ranges, with trading volumes being very low on both sides of the divide. However, this can be likened to the calm before the storm, as the charts will show that the price of XRP may be due for a breakout. So what is the analysis for Ripple as we head into February 2019?

Ripple seems to have overcome some of the major obstacles it faced in 2018 and has started 2019 with some positive news concerning its adoption for cross-border payments. The latest of such news comes from Japanese financial giant SBI Holdings, which has given subtle endorsement to Ripple’s potential as a cross-border payment currency in its 9-month financial report.

The continuing news of large-scale financial institutions getting involved with Ripple’s potential use for international trade payments and cross-border remittances is perhaps the biggest blockchain disruption happening at the moment. As Bitcoin is stymied at current prices, Ripple appears like it could be the first cryptocurrency of any kind to go mainstream.

The weekly chart below shows that price on a long-term basis, has entered into a squeeze; contained within the confines of converging trendlines that border the highs and lows of the price action of the last four months. 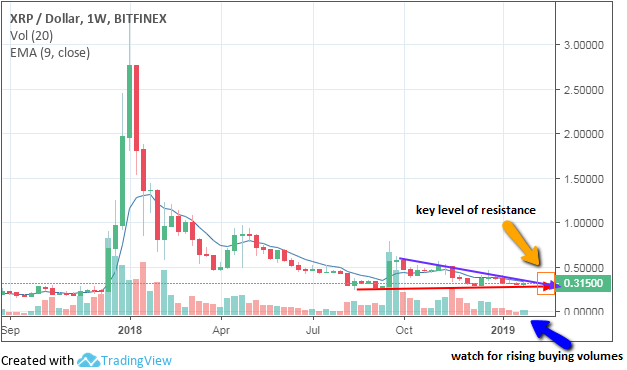 The key price level on this chart happens to be the $0.3150 mark. This is the price at which the two trendlines will converge, and forms the apex of the symmetrical triangle.

In order to get the broader picture, we bring on the daily chart, which presents a picture that will need some bit of interpretation. What can we see from the daily chart? 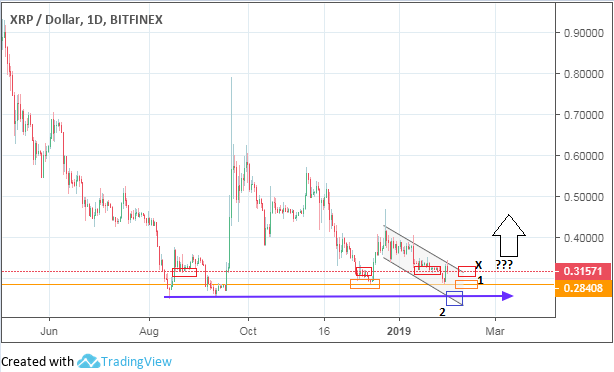 With the information on the weekly and daily chart, what can we say about the XRP/USD pair going forward?

From the long-term standpoint (weekly chart), the price action is due for a significant breakout. Current market sentiment favours an upside breakout, but this has to occur above the 32 cents mark and must be accompanied by an increase in volumes on the buying side of the market. There is also the chance that Ripple could be overtaken by some of the prevailing market negativity and may also push south. In any case, traders must watch for the closing price of the active candle as well as that of the next trading week, to determine where the breakout would occur. Also keep an eye on the volume bars on the chart.

Those who want to trade based on the information on the daily chart have their work cut out for them. This is because there are several key levels that must be factored into the equation. At the moment, price is right in the middle of the channel, and even though it is close to the support level at point 1, there is no guarantee that price will bounce there.

Therefore, a safer alternative for traders who are bullish on Ripple may be to allow price action get all the way down to the lower channel line at point 2, where this line is strengthened with support from the blue support line. They may therefore follow the price upwards initially to the upper channel line, if there is good buying volume as well.

Those who are bearish on Ripple may decide to allow price to get to the upper channel line, then follow a possible price action down south from this line if price is rejected at that point. The next few days will provide some direction as to the course of action to follow, along the lines stipulated above.

The long- and mid-term outlook for Ripple on the XRP/USD trading pair.

Please note: all relevant candles/bars must be allowed to close, and the closing prices compared to the key resistance/support levels before decisions can be taken on price direction.

Well, the crypto craze may have deflated. But that's not a bad thing! In fact, if you still believe in the transformative power of blockchain, it means that many of these technologies are back to early adopter prices. At the Coin Agora, our focus is on altcoins - the smaller cap cryptos that have massive potential to disrupt business ecosystems. Don't miss out—the price craze may return in 2019 and it's your chance to get in now. Let us help you cut through the noise and find winners - join the Coin Agora community today!

The Freedonia Cooperative
2.91K Followers
Author of The Coin Agora
We find small, new, and growing coins and get you in on the ground floor

Disclosure: I am/we are long XRP-USD. I wrote this article myself, and it expresses my own opinions. I am not receiving compensation for it (other than from Seeking Alpha). I have no business relationship with any company whose stock is mentioned in this article.