2018 certainly proved to be a turbulent period for equities, and the market was especially volatile in the fourth quarter, effectively wiping away all the gains that the S&P 500® had generated in the first three quarters of the year. Overall, the S&P 500 returned -4.38% in 2018. Despite landing in negative territory, the S&P 500 still performed better on a relative basis than its mid-cap or small-cap peers (see Exhibit 1).

There are market participants who believe the performance of the S&P 500 is driven by mega-cap securities, and it is not difficult to see why the perception persists - from December 31, 2012, through December 31 2017, 23% of average annual total return came from the top 10 securities ranked by market capitalization (see Exhibit 2).

In order to delve deeper into whether size played a role in 2018, we expanded our analysis beyond the top 10 securities. To do so, we grouped the constituents of the S&P 500 into deciles in descending order by market capitalization. Therefore, Decile 1 contains the largest 50 securities of the S&P 500. We then analyzed the contribution to returns of the decile portfolios (see Exhibit 3). Given that Q4 2018 proved to be the most volatile, we calculated Q1 through Q3 2018 performance to understand how the portfolios were performing prior to the hard-hit Q4 2018.

Not surprisingly, Decile 1 was either the best-performing or the worst-performing group for every quarter in 2018. Further, the decile portfolios' returns were generally monotonic in both up and down market periods in 2018. Against that background, one could very well say that market cap played a dominant role in S&P 500 performance in 2018.

However, since S&P 500 employs a market-cap weighting system, we need to isolate the bias introduced by size in the weighting scheme. What happens if we repeat the same exercise for the decile portfolios and employ an equal-weighted methodology? Would the higher deciles still drive overall performance in both up and down markets?

When the impact of size was neutralized through an equal-weighted methodology (see Exhibit 4), Decile 1 did not rank as the worst performer, nor did it rank as the top performer. In fact, during the Q1 though Q3 cumulative performance period, Decile 3, Decile 10, and Decile 2 ranked higher than Decile 1.

For the volatile Q4, Decile 1 lagged the best-performing Decile 3 by just 0.1%. The performance during Q4 saw the smallest 50 securities of S&P 500 underperform, with returns lower than all other portfolios as well as the market. 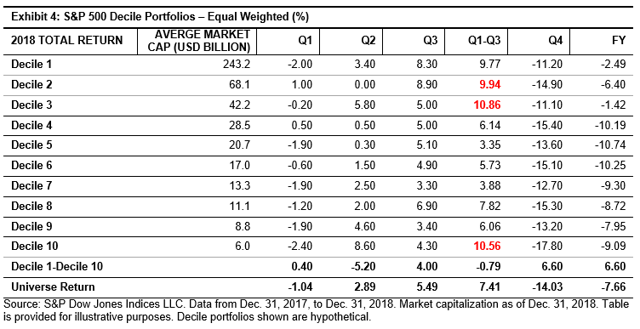 What does this all mean? In 2018, the portfolio that detracted the most from performance was Decile 1, which consisted of the 50 largest securities of S&P 500. However, when the same portfolios were equal-weighted, Decile 1 was the second-best performing portfolio (-2.49%). Looking at the results, one cannot conclusively confirm that size was the sole driver of negative performance in 2018. To be fair, 2018 is just one year of data, and to confirm definitively, we would need to study a longer time period.

S&P Dow Jones Indices
2.05K Followers
At S&P Dow Jones Indices, our role can be described in one word: essential. We’re the largest global resource for index-based concepts, data and research, and home to iconic financial market indicators, such as the S&P 500® and the Dow Jones Industrial Average®. More assets are invested in products based upon our indices than any other index provider in the world; with over 1,000,000 indices, S&P Dow Jones Indices defines the way people measure and trade the markets. We provide essential intelligence that helps investors identify and capitalize on global opportunities. S&P Dow Jones Indices is a division of S&P Global, which provides essential intelligence for individuals, companies and governments to make decisions with confidence. For more information, visit www.spdji.com.Copyright © 2016 S&P Dow Jones Indices LLC, a division of S&P Global. All rights reserved. This material is reproduced with the prior written consent of S&P DJI. For more information on S&P DJI please visitwww.spdji.com. For full terms of use and disclosures please visit www.spdji.com/terms-of-use.
Follow
To ensure this doesn’t happen in the future, please enable Javascript and cookies in your browser.
Is this happening to you frequently? Please report it on our feedback forum.
If you have an ad-blocker enabled you may be blocked from proceeding. Please disable your ad-blocker and refresh.