The global economy appears to remain bearish moving further into 2019, which presents some opportunities to short business cycle-sensitive sectors. The construction sector in particular is a strong indicator of a country’s economic health; how consumers behave when purchasing houses and infrastructure projects which are undertaken. As the Australian economy has experienced inconsistent GDP growth relative to its American counterpart, forecasting GDP in the land down under appears to be a logical first step. This is done through the recent release of Australia’s PMI and previous PCI release. We find evidence which suggests that we generate a trading idea involving a short position in the construction sector. When exploring potential firms to short, we find one which has substantial exposure to the construction and mining sectors. The firm’s financial ratios also suggest poor performance. Next, we suggest a hedge in the mining sector as we only wish to be exposed to the construction sector. Technical analysis and price action all point to strong short-term momentum and building long-term momentum. Finally, we suggest stop losses and soft targets to be used when performing this spread trade.

The recently released Australia PMI for January has shown a slight increase to 52.5 points on a seasonally adjusted basis, indicating a mild recovery in the Australian economy in the first month of 2019. Within the PMI, we find that the building materials, wood, furniture and other manufacturing products sector has expanded in the previous month, however at a slower rate. Interestingly, the mining sector has benefited from mining maintenance and upgrade projects. We also find that the metal products sector is currently stable, however orders from larger construction customers have slowed, a trend which has occurred since late 2018. Furthermore, the chemicals sector is experiencing a mild contraction, partially reflecting poor performance in construction related products. While the machinery and equipment sector has contracted slightly by 0.5 to 50.9 points in January, it is the first month to have reported difficulties in financing, harming equipment sales. Furthermore, the sector is expected to decline given the lack of building approvals. This makes it a sector of interest to watch when the supply chain is first affected by a lack of demand in construction projects. 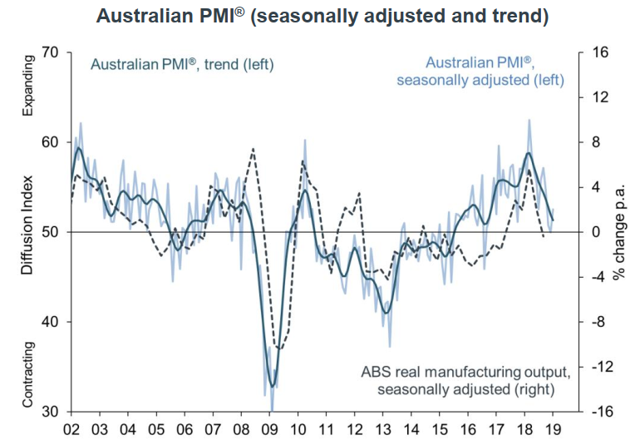 The Australian PCI has remained below the 50-points level for four consecutive months, with the index falling 1.9 points to 42.6 points between November and December on a seasonally adjusted basis; the largest fall in 2018 and at the steepest rate in half a decade. Construction activity has also declined significantly, falling to 35.7 points, the third consecutive month of declines up to December. Overall new orders have also indicated that the declines do not appear to be temporary, with a continued drop in the number by 4.8 to 41.0 points. 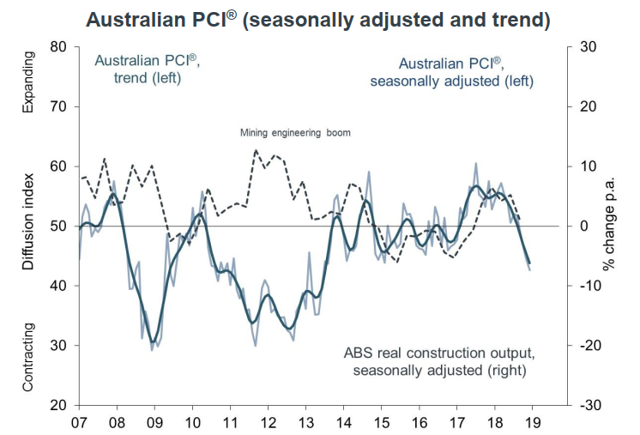 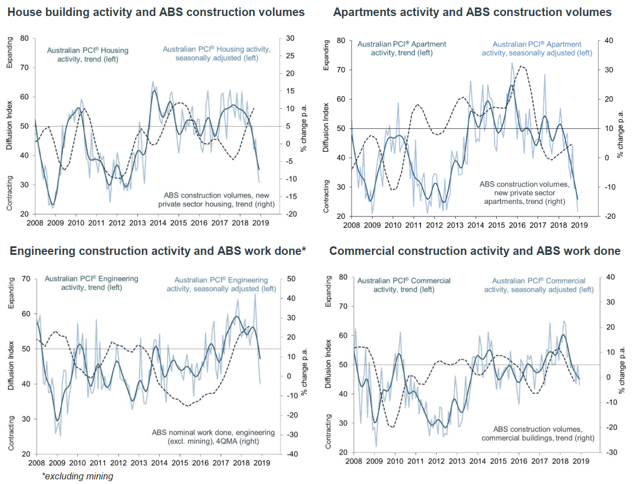 Forward looking measures of construction do not appear to be merciful either, with new orders for each activity suggesting that performance is likely to remain subdued during the first month of 2019. ABS data is also indicative of this. Australia-wide, building approvals have fallen between November and December on a seasonally adjusted basis in all categories, except for public sector dwelling units (which only accounted for 1.07% of all building approvals). There is a significant drop in approvals of dwelling units excluding houses primarily in the private sector, namely apartment buildings; a 18.59% decrease in approvals. This is similar to the performance of the three states with the largest proportion of building approvals. New South Wales has experienced falls over the last three consecutive months, more recently a fall of 5.48%. Queensland has experienced something similar, with two months of consecutive falls and a recent fall of 1.60%. Meanwhile, Victoria has shown choppy building approval action, with a recent increase of 1.58%. This suggests that future poor performance in construction is driven by softening demand, a common denominator across all construction activities. 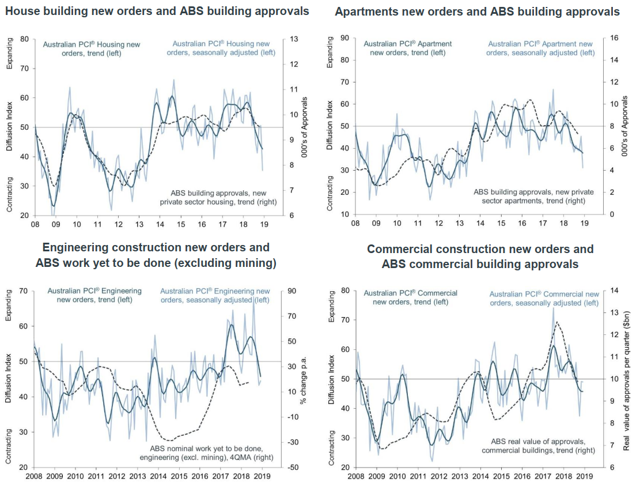 One particular stock of interest is Seven Group Holdings Limited (ASX:SVW), a firm which is highly exposed to Australia’s construction sector. The group’s primary line of business is heavy equipment sales, particularly in the construction and mining sectors. However, the group also has interests in energy and media sectors. When analyzing the group’s revenue, we find that the majority of revenue is derived from the WesTrac Group and Coates Hire. WestTrac Group is the equipment dealer arm of the group, primarily distributing construction and mining equipment and accounting for 76.44% of the group’s total revenue in 2018. Coates Hire is the general equipment hire component of the group, accounting for 20.26% of the group’s total revenue in 2018. While this is problematic, the group also has energy and media investments, which accounts for a collective 28.17% of EBIT, while the WesTrac Group and Coates Hire accounts for a collective 64.78%. This is slightly better in terms of diversification, however the firm is still highly exposed to construction and mining demand. While mining demand appears to be expanding slightly, it is not enough to offset the significant construction demand woes across all activities.

The projected direction of media investments through the TCF, paper and printing products sector of the Australia PMI suggests that it will hedge out some of the risks in construction and mining, however the sector had previously faced a volatile year in 2018. This does not make this hedge completely ideal for the firm. The energy sector has faced elevated input costs for numerous years, making the group’s energy investment in SGH Energy (100% ownership) and Beach Energy (25.6% ownership) another problematic hedge. When looking deeper into these investments, we find that Beach Energy derives revenue quite evenly between its crude oil and gas and gas liquids operating segments. However, SGH Energy appears to be more focused on natural gas; with larger gas fields, appraisals and prospects compared to its current oil fields. Natural gas is the second largest source of electricity generation in Australia; approximately 21% of total electricity generation in 2017. This suggests only a partial hedge away from the expected woes of construction through energy demands which are not dependent on the business cycle.

For an accurate view of the Seven Group relative to other comparable firms, multiple ratios are considered. The group’s stock performance appears to be relative neutral relative to comparable companies, with a moderate price/cash flow ratio (TTM) of 10.14. However, the group also has a high price/sales ratio relative to comparable companies. This suggests that the additional actions which are used to generate cash for the group is valued less by the market. As a result, a firm’s efficiency and management’s effectiveness need to also be evaluated.

Firm efficiency ratios appear to coincide with the implications of a lower relative price/cash flow ratio compared to a high price/sales ratio. The inability to effectively utilize its assets nor inventory to generate sales all point towards problems in efficiency, rather than generating sales itself. Conversely, management effectiveness appears to be a strong, with a high return on average assets (TTM). This suggests that management’s control of cost of goods sold is enough to enable an efficient use of assets. However, the firm’s exposure to an inefficient use of asset and inventory to generate sales will be problematic, particularly when the firm’s sales is hit by dwindling demand in Australia’s construction and mining sectors. To further confirm this view, profitability ratios are evaluated.

The firm’s low net profit and gross margins suggest that operating costs, interest and taxes have weighed heavily on the firm’s ability to generate profits. This presents the company with greater exposure, particularly with high employee benefits, repairs and maintenance and operating lease rental.

While the group has a significantly higher payout ratio (5 yr avg) relative to comparable companies, this can be attributed to Australia’s use of the dividend imputation system. This encourages dividend payouts as they are not taxed twice, as opposed to a classical dividend system. However, Seven Group does contain negative reserves, with retained earnings being unable to cover this loss. This suggests that the company’s dividend policy is unsustainable. Either way management decides to proceed, the firm’s capital intensiveness is projected to drive the firm’s share price lower. 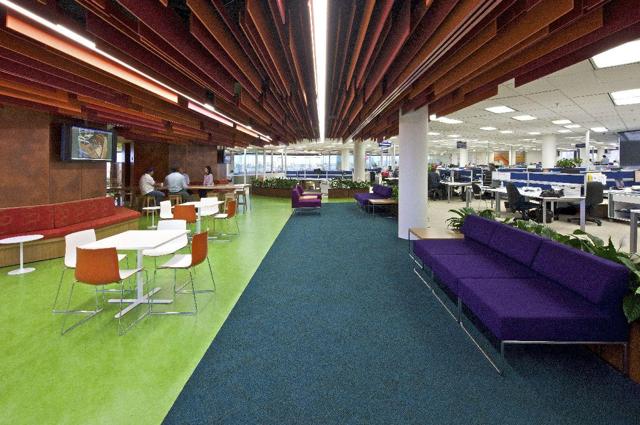 When analyzing the high-low range of the two firms, we find that Seven Group Holdings has relatively higher 3 and 6-month ranges, while containing a lower 1-year range compared to Fortescue Metals. Stop-losses are derived from these ranges for each time horizon. I recommend the use of stop losses 14.88%, 15.86% and 19.41% for 3-month, 6-month and 1-year time horizons respectively. This translates to spread ratios of 0.3152, 0.3116 and 0.2984 for 3-month, 6-month and 1-year time horizons respectively. I have also determined soft targets for each time horizon using a 1:3 ratio of points below the current spread ratio to above the current spread ratio; 0.5357, 0.5466 and 0.5860 for 3-month, 6-month and 1-year time horizons respectively. This is reasonable as the proposed soft targets have historically been reached. As previously mentioned, the spread ratio has historically remained within the channel between 0.15 and 1 since late 2008. This suggests that when the ratio reaches either extreme, it is possible that the ratio will revert and remain within the channel. However, this will depend on fundamental views which are constantly revised while this trade is still on. If your fundamental view of the spread trade is consistent with a breakout when near the ratio of 1, then the trade should remain on. If not, then the trade should be exited.

The Australian construction sector has performed poorly in recent months and there appears to be no signs of slowing down. I recommend a short in the construction sector to capitalize on this and use the capital goods sector to do this. We find that Seven Group Holdings is highly exposed to both the construction and mining sectors, with only partial hedges in its energy and media investments. The group also has financial ratios which suggest the firm’s projected under performance relative to comparable firms. As a result, I suggest a short position in Seven Group Holdings. However, I also suggest hedging mining sector risk by entering into a long position with Fortescue Metals Group. This should be performed on a 1:0.8361 dollar ratio, Fortescue Metals Group to Seven Group Holdings respectively. Using technical analysis and observing price action, we find that 3 and 6-month momentum exists for this spread trade, while 1-year momentum is currently building. This suggests that if a trader has either a 3 or 6-month time horizon, the trade can be entered now, while a trader with a 1-year time horizon only needs to wait a short time for the 120-day simple moving average to crossover and above the 250-day simple moving average. When the trade is entered, stop losses of 0.3152, 0.3116 and 0.2984 for 3-month, 6-month and 1-year time horizons respectively should be used. The soft targets which should be used are 0.5357, 0.5466 and 0.5860 for 3-month, 6-month and 1-year time horizons respectively. The stop losses and soft targets should be revised when soft targets are reached, and the existence of the trade should be questioned when the ratio reaches close to the upper extreme of the channel. This will depend on the trader’s consistently revised fundamental view and whether it is enough to warrant remaining in the spread trade.

Richard A. Lee
36 Followers
4th Year Bachelor of Commerce student at the University of Melbourne with majors in Finance and Economics (2018 Finance Honours Candidate)
Follow