Natural Gas (UGAZ, UNG) was my most profitable trade for the commodity segment in 2018. This is as I had highlighted in my article on 29th October 2018 that I expect Natural gas prices to have a steep ascent. This proved to be true as the commodity commenced a bull run from 30th October up until 14th November which resulted in the price rising from $3.100 to 4.837. This in turn provided investors with a return of roughly 62% in a span of 12 trading sessions.

However, the big question now is how will natural gas be performing over the next one to three weeks. Hence, to answer this, I shall look at the fundamental news affecting the commodity, whilst also analysing the charts using technical analysis tools. Nevertheless, I shall place a higher emphasis on technical analysis as it has proven to be highly accurate in predicting the price trajectory of the commodity in 2018, as has been seen in a number of my prior articles.

Open interest refers to the total number of open long and short positions in the futures market for a respective asset. For natural gas, the open interest metric has been on the rise since the beginning of 2019. I say this as at the end of December 2018, the open interest level stood at 1.2 million contracts which have risen now to 1.33 million contracts as of last week. This in turn indicates to investors that the speculative short positions are rising which is what has caused the commodity's price to fall in the prior few days. However, I expect the level of short positions to start reducing as Natural Gas is approaching a key support level. 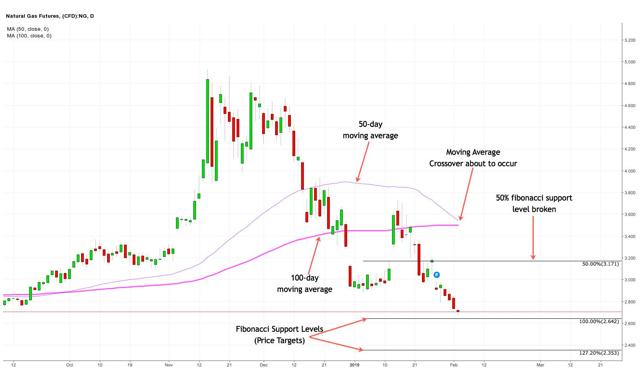 The daily chart of Natural Gas indicates to investors that the commodity will be having a further downwards descent. However, I do not expect it to be a sharp descent as I believe the commodity will form a sideways pattern that will cause it to decline slowly over the coming days. I say this as the commodity’s lagging line had broken out of its Ichimoku cloud pattern which is what triggered the sharp descent. However, the pace of the descent shall now slow down as the short-term RSI has reached the 3 mark. This indicates to investors that a sideways pattern of lower lows will be forming soon. Moreover, the 50-day moving average is about to break below the 100-day moving average which indicates to traders that a further decline is on the cards.

Overall, Natural Gas is presently providing traders with several signs that the downward move has not come to an end. However, I expect the decline to occur gradually via a sideways pattern which shall cause the commodity’s candles to have lower lows. I say this as the technicals indicate to investors that such a pattern is being formed. Nevertheless, whichever way you do decide to trade, do ensure that you utilize trailing stops, as this shall aid in capital preservation.

Sandeep Singh Ahluwalia
862 Followers
I am a finance and investment professional whose prime focus is on the British, Indian and American financial markets. I specialise in technical analysis with my key area being Candlestick pattern analysis and Fibonacci analysis.  Academically, I posses two masters degrees one is a Masters of Science in Finance degree from the University of Portsmouth, United Kingdom and the other is a Masters of Commerce degree specialising in Accounting. My Bachelors degree is in Economics, Finance and Banking from the University of Portsmouth, United Kingdom.
Follow