Peyto (OTCPK:PEYUF) is now altering its very successful strategy to include some processing to pull out some profitable products from its gas to sell separately, and drill for a mixture of liquids and gas while keeping those rock bottom production costs.

Peyto is one of the lowest cost gas producers in North America. For a long time, this company had a very successful history by producing and selling dry gas. However, the unconventional production growth in the United States has pressured gas pricing far beyond what most have foreseen.

This company has long avoided completing wells until the winter heating season is underway to maximize the value of the initial well production. This legitimately inflates the well returns. The initial high well production and high decline rates occur during the peak winter gas price season (or at least stronger gas prices in the winter).

Peyto also has a history of growing during downturns while biding its time during the good times. Lately the company has snapped up some acreage during some of the industry's worst headlines to expand into liquids production. The contrarian tendencies of management keep a very tight lid on costs during both good times and leaner times.

AS SHOWN ABOVE, the stock peaked in 2014 and really has been on the decline since then. Gas pricing has been a continual disappointment for some time. This fairly strong company initially decided to wait out the gas pricing until it became obvious that some changes were needed.

Management first cut the distribution to C$.02 per share each month beginning with the latest announcement. The balance sheet is definitely decent and cash flow is more than sufficient to service the debt. However, management feels that now is the time to utilize that cash in the business rather than pass it to shareholders.

One of the largest shareholders, Darren Gee, President and CEO, will be directly affected by this decision. He has noted several times over the past few years that he is not satisfied with the stock performance. But his substantial holdings help him make long term decisions even if the stock suffers in the short term. Many fault him for not including liquids sooner.

However, this company still has significant financial resources. The only thing that has happened is that the gas produced has become less valuable over the last few years. Peyto has now responded by beginning to ship gas to more profitable markets. The company is also examining further processing to pull other profitable products out of the gas stream as indicated by current market conditions. Some of those more profitable products can be sold separately.

The move into condensate and possibly some oil poses more challenges. Many companies that find liquids also see their costs rise. Peyto, at least initially appears to want to hang on to the rock bottom processing costs while adding more valuable liquids to the sales mix. In fact management currently intends to find ways to decrease costs even more. If this management succeeds long term in maintaining rock bottom costs while increasing the value of the sales mix, this could be one very valuable company in the future. 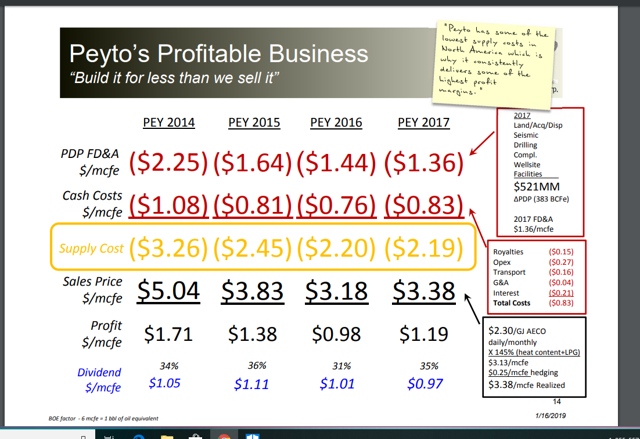 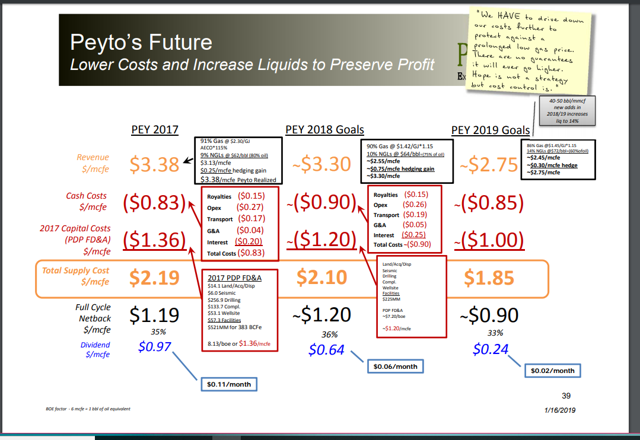 One of the key parts to the 2019 goals is the continuing strength of the Canadian condensate (some would say very light oil??) market. Canada actually imports needed condensate (or very light oil??) to mix with the heavy oil so that it flows through the pipelines. Rarely is condensate in surplus as it was in the fourth quarter when many refineries went down for upgrades and repairs.

Another key part of the profit picture is the hedging strategy. Traditionally this company forward sells its production to guarantee the price and eliminate some very wild AECO fluctuations. Though the market may not like it (or value it highly) continuing hedging gains continue to be a key part of revenue.

Like much of the industry, Peyto continues to forecast more production improvements. Some of those improvements undoubtedly have already been tested and are ready for implementation. The surprise here is that those already very low costs can go lower. 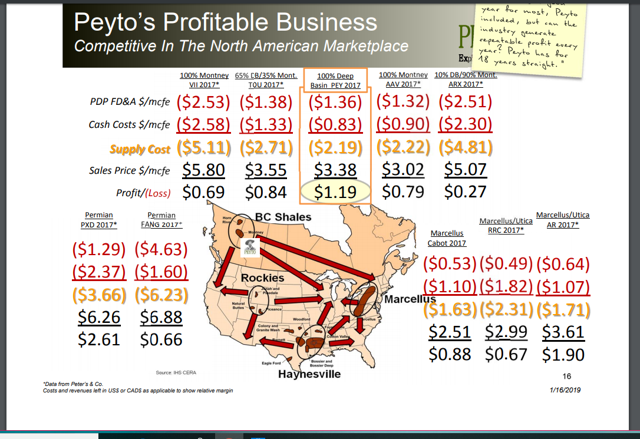 Peyto traditionally had decent margins even selling through the AECO system with their hedging program. Fellow competitor ARX (which is the Canadian symbol for ARC Resources instead of the OTC AETUF) has a low margin but makes up the difference in volume to report a decent balance sheet and ratios. Still, the ARC Resources selling price obtained by selling gas into more profitable markets points to a potential profit improvement that PEYTO management previously ignored.

One of the very telling comparisons that makes this particular slide far more legitimate than many was the willingness of management to post the results of Antero Resources (AR). Antero Resources is one of the few primarily gas producing companies out there with better margins than Peyto. Most of the times, management very obviously picks the comparisons to maximize the presenter advantage. Here, Peyto does fairly well without a lot of cherry picking.

Peyto ignored some industry trends until those trends became absolutely painful. Some would call that conservative management while others would have a far worse description. However, key debt ratios still enable the company to keep debt costs low. The company has ample liquidity and financial flexibility. 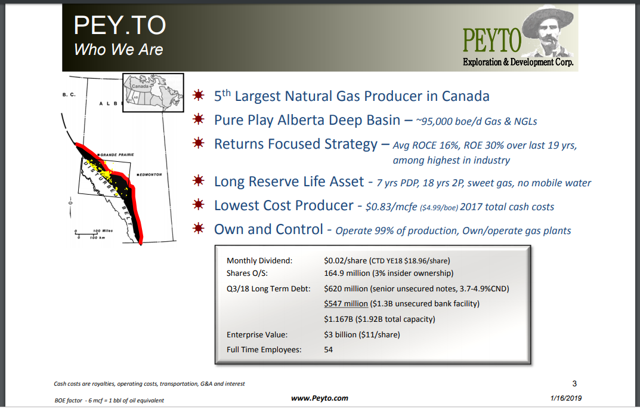 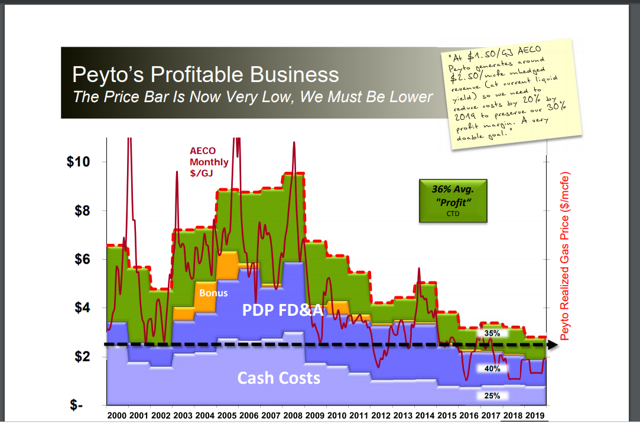 Clearly the management emphasis on low cost leadership will continue. The new addition to the long term strategy will now be revenue enhancement. This will take place both by increasing liquids produced as well as marketing the production in more favorable pricing environments.

This company is still very financially strong. The latest dividend cut will allow debt payments to reduce debt until a favorable deal comes along or management is able to profitably increase production. Many gas producers have fared far worse than this one.

But now there appears to be a clear path to a price comeback. The sizable existing production will allow a slow production mix change to more growth. The proposal to enhance the natural gas processing plants to pull out more profitable products from the gas mix and sell them separately should also enhance future profitability.

Management has been a little slow to accommodate market changes. However, the company is able to accommodate the significant strategy changes without balance sheet strength damage. Reinvestment in the business appears prudent at the current time. The strategy change should ensure a return of the dividends in the future along with enhanced cash flow and profitability.

The cash flow per share was C$2.27 for the first nine months. The cash flow from operations per share should be roughly $3 for the full fiscal year. It may take a year or so to implement everything stated in the 3 year plan.

Nonetheless, as the sales prices of competitor ARC Resources and others demonstrate above, there is considerable upside potential in the sales price shift to sales in higher priced markets. Further benefits from optimizing the sales by liquefying and selling separately the various products. The move to drilling more liquids could pay very large cash flow dividends quickly. Altogether the cash flow per share should top C$5 in five years. Even taking into account the currently weak Canadian dollar, the stock appears to be quite a bargain.

Disclaimer: I am not an investment advisor, and this article is not meant to be a recommendation of the purchase or sale of stock. Investors are advised to review all company documents and press releases to see if the company fits their own investment qualifications.

I analyze oil and gas companies like Peyto and related companies in my service, Oil & Gas Value Research, where I look for undervalued names in the oil and gas space. I break down everything you need to know about these companies -- the balance sheet, competitive position and development prospects. This article is an example of what I do. But for Oil & Gas Value Research members, they get it first and they get analysis on some companies that is not published on the free site. Interested? Sign up here for a free two-week trial.

Long Player
15.37K Followers
Author of Oil & Gas Value Research
Get analysis on under followed Oil & Gas companies with an edge.
I am a high school teacher for a decade. Before that I was an analyst (operations and financial) and for a short time a Controller I have a B.S. with an emphasis in Accounting and an MBA (for which I studied Finance, Economics, and Management) I passed the CPA exam on the first try and am a retired CPA in the state of Maryland. I have a high school teaching credential and an MA in Math Education

Disclosure: I am/we are long peyuf ar. I wrote this article myself, and it expresses my own opinions. I am not receiving compensation for it (other than from Seeking Alpha). I have no business relationship with any company whose stock is mentioned in this article.