Last year was bad, and management agrees. CEO Jim Hagedorn "see[s] 2019 as a bounce back year for Scotts Miracle-Gro and look[s] forward to proving it."

With the asset write-downs and legal charges incurred over the last 2 quarters, management had set the stage for some positive news. You can read about the company's most recent Q4 and FY 2018 here.

Company-wide sales were up about $76.6M (almost 35%) for the quarter, but $72M came directly from Sunlight Supply which wasn't on the books last year. Encouragingly, U.S. Consumer segment was up almost 9% from last year's Q1. Still, this calculation benefits from a very favorable comp. Mr. Hagedorn stated in his opening remarks, "the U.S. Consumer segment to start the 2018 season was historically bad." Management warned not to extrapolate too much from Q1, which is always the weakest quarter due to seasonality. Still, CFO Randy Coleman said, "we now believe our first half net sales for U.S. consumer will approach $100 million higher than a year ago." Unfortunately he went on to say the increase was only a shift in timing and guidance was unchanged ...

The marijuana related businesses housed under Hawthorne segment disappointed again. Sales for the segment declined $11.4M (about 7.5%) sequentially. If we back out the $72M brought in by the recently acquired Sunlight Supply, Mr. Hagedorn submitted "comparable sales in Q1 declined by less than 10%."

This is unfolding amongst the backdrop of explosive growth in the marijuana sector. Jurisdictions worldwide are passing laws legalizing medical and recreational cannabis. The company has spent hundreds of millions over the last few years trying to grab market share. Why have organic sales declined for 5 consecutive quarters now?

Management blamed politicians in California again and hopefully for the last time.

Since the inception of the Hawthorne subsidiary, management has been on a spending spree. Mostly because marijuana business prospects seem enticing, and partially because the core business has matured. 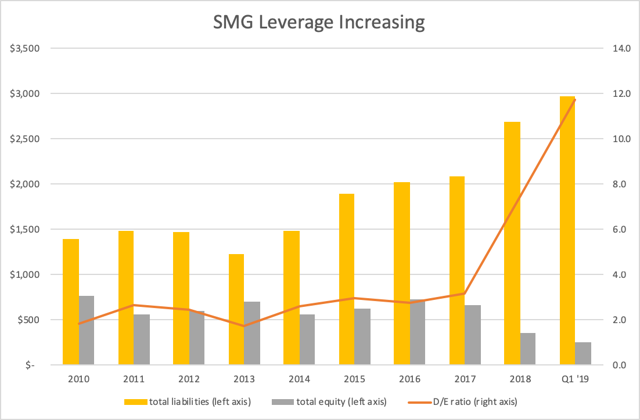 The company wrecklessly loaded up on debt to finance its acquisitions and share buybacks. Mr. Coleman said:

as a result of higher borrowings, our leverage ratio, which is based on a rolling 12-month average, was four and a half times at the end of the quarter. As I’ve told you in the past, our primary use of cash over the next several quarters will be to delever.

The credit facility covenant would be breached at 5.0x leverage. Tip of the hat to Mr. William Reuter from Bank of America for being the only analyst to follow up on the most important comment made in the conference call.

Meanwhile diluted EPS is down again:

Even if we take the non-GAAP, non-bad stuff adjusted numbers, we are still heading in the wrong direction. Thankfully, management has forecast a return to growth in earnings this year, though only back to 2017 levels, and with reduced profitability margins.

The company may have bought out Sunlight Supply at the peak of the marijuana bubble. Sales for the Hawthorne segment started sputtering in Q4 2017. 6-9 months later the company announced a transformative acquisition in Sunlight Supply. The purchase more than doubled sales of the old Hawthorne, but at the expense of gross margin.

Management seemed to imply they are using some aggressive strategies, including sacrificing sales. Mr. Coleman said:

Remember that Hawthorne discontinued sales to other distributors after the Sunlight acquisition. When we make adjustments for changes to the business model, the comparable decline was about 10% on a year-over-year basis.

The larger strategy change that has essentially gone unmentioned by management is that Sunlight Supply really is a distribution company and not a marijuana product or service provider. There is nothing proprietary about what they do and it's not saying much that they specialize in shipping lights or air filters ...

Now the company is going to war with other distributors in the space. This is just not an enchanting story of growth in a sexy sector.

They supposedly created a new corporate strategy group to review the big picture business model. Mr. Hagedorn went so far as joking about the future of the hydroponics business:

You might be assuming by now that I’m going to announce the series of change at this morning, not. Instead, I can tell you we came out of that profit – process confident and aligned that our strategy is sound. While there are always lessons to be learned and adjustments to be made, there is no reason to change our strategy.

CEO Jim Hagedorn touched on valuation in his opening remarks:

The euphoria around Hawthorne, the legally authorized cannabis production is what took our share price to 110. That wasn’t solely based on our performance clearly; a portion of that valuation was speculative. Likewise, when the share price fell to $57 last month, it was clear we were swept up into the overall volatility of the market. That valuation didn’t make much sense to me either.

I halfway agree: the stock had no business being in the $100s. But I struggle to come up with a value over $60. Company earnings are down 3 years in a row and management has failed to meet expectations in a rapidly growing market.

Last fiscal year the company posted non-GAAP adjusted EPS of $2.23. Using today's share price of about $75, that translates to a PE of ~35x. On a trailing 12 month basis the number gets worse, and you can forget about GAAP EPS...

Fiscal 2019 non-GAAP adjusted earnings are projected between $4.10 - $4.30. Assuming they hit the mid-point of their guidance, the company trades at ~18x non-GAAP adjusted forward earnings. That doesn't sound entirely offensive, but certainly not cheap. The question is, how big a difference will we see between GAAP and non-GAAP earnings?

The company's conference calls are usually interesting to listen in on. Mr. Hagedorn often gets annoyed and says some funny stuff. This call was no different ...

Eric Bosshard from Cleveland Research Company asked an astute question about how the company plans to do better selling to commercial marijuana producers when the core business failed to capture much of the commercial lawn & garden business. His implication being Hawthorne will mostly sell to small time growers, which will end up making a tiny portion of overall production.

Mr. Hagedorn came down swiftly upon the unsuspecting Mr. Bosshard:

Dude, I have a ton of respect for you, but I think that’s total bullsh*t [ph]. This is a pro business, okay. And our ProHort and ProTurf businesses were the best businesses for those markets in the world, okay. Both of those business we sold, okay. And our ProHort business, which I view as similar to this, is a business that was really good for us. We just viewed it as kind of a non-consumer business and it wasn’t core to us. And that business, we sold to the Israelis for, I think, really good money, which I think we distributed to our shareholders.

He even touched on sandbagging (or not?):

Again, I don’t want to like get into this like being accused of sandbagging, but it is true. Okay, which is that, Randy and I sort of run the corporate kind of books. Mike is running the operating side of the business, and Mike has a much different set of numbers that he’s using on the operating side. It’s just Randy and I aren’t translating that over to the corporate side, because we – we’re comfortable with where we said we’re going to be for the year.

Those of you who read my previous articles on SMG know I shorted the stock in the 2nd half of last year. Unfortunately I was a little late to the party and exited the position basically flat. I remain bearish on the stock, but view a short position here more speculative and allocated my capital elsewhere.

I am still watching closely for signs of deterioration in Roundup sales and company-wide margins. The leverage ratio remains precariously close to breaching debt covenants and interest expense is rising. The company levered up and to fund acquisitions and buy back its stock and now has to delever. With higher interest rates and a questionable economic backdrop, an opportunity to short may arise again soon.

Surprisingly for me, management claims Roundup sales are doing just fine. Still we are yet to enter the main growing season so the story is still unfolding. If the company manages to get through the next year without taking a major PR hit for distributing a potential carcinogen, I suspect they will generate the cash to reduce the leverage ratio. At that point I will move to a more neutral stance on the stock.

Paid Observer
272 Followers
Fun fact: there are more potential moves in a game of chess than there are electrons in the observable universe. Good thing you don't need to analyze them all (or even a fraction) to win. If you follow a few elemental tenets you could eliminate about half the number of electrons in the observable universe worth of unfortunate board positions. Not bad...
Follow