In its Q3 earnings announcement, Nvidia (NASDAQ: NASDAQ:NVDA) dropped the bomb shell of lowering the Q4 revenue guidance by 25%, citing crypto-related excess inventory. The stock has plummeted more than 16%. On January 28, three weeks before its Q4 ER, Nvidia’s CEO Jensen Huang came out yet again to warn to lower Q4 revenue guidance, citing weaker sales of its gaming and datacenter platforms, deteriorating macro conditions particularly in China, for customers delaying orders. The unusual move has stunned the market. In addition to Nvidia’s 18% loss, the NASDAQ index also lost close to 3% in concert.

This is a volatile time for the stock market. With ongoing trade war negotiations, Fed’s changing stance of interest rate policy, and looming global economic slowdown, investors are hungry for any clues to indicate the future outlook. Given most bellwether stocks like Facebook (NASDAQ: FB), Apple (NASDAQ: AAPL), Taiwan Semiconductor Manufacturing Company (NYSE: TSM), and Nvidia’s Q3 have been somewhat “punished” by the market for their downside revenue guidance, it is not surprising that Nvidia's shareholders have reacted so violently to the warning of the downside guidance. However, Nvidia has lost close to half of its market capitalization in the last four months and most likely due to the two downside guidance warnings. In this post, I like to show that the 40% loss is excessive if it was just due to downward guidance revisions.

Generally, Wall Street takes management guidance very seriously. As guidance is often the only source of a company’s new information, analysts use it to formulate their estimates and recommendations. When Nvidia lowered their Q4 and Q1 revenue guidance, the Street analysts adjusted their forward estimates almost instantly (the circles in Figure 1). This is why Street estimates are closely tracking guidance and stock prices react to both the changes in guidance and estimates. 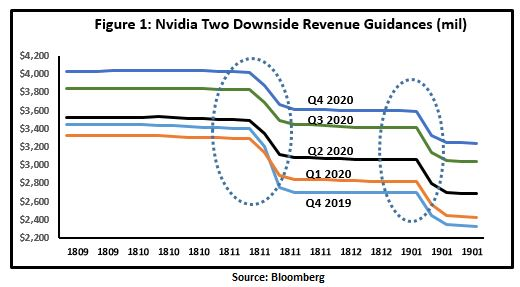 In Figure 2A, there is a clear correlation between Nvidia's share price drop after October 2018 and the downside revenue guidance occurred around the same time. As guidance has been priced in some time ago, Nvidia's shareholders are more sensitive to guidance revisions (Figure 2B). The intense sensitivity can be demonstrated by the -40% loss in response to the downward changes of Q4 revenue guidance. 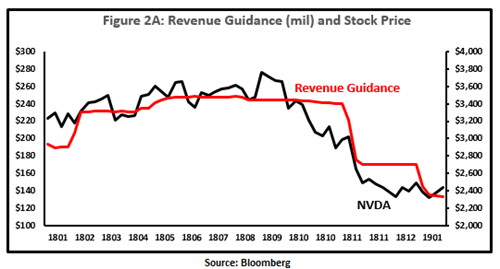 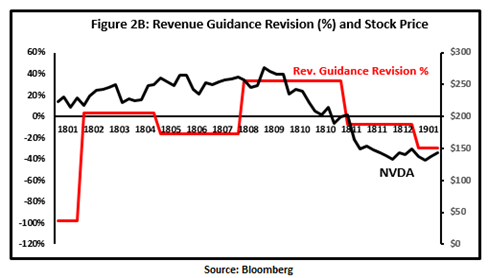 Since October, after Nvidia’s first downside revenue guidance, stock prices frequently dropped below the guidance suggested fair value level. Just in the last few days, Nvidia surprised the market by issuing its second pre-warning of Q4 downside guidance. The stock dropped to $144, which is about $40 below what it should be traded at $186, as implied by the new lower guidance and adjusted by the recent tech rebound. For a further close-up, Figure 4 demonstrates that Nvidia is currently trading at a 23% discount (or undervalued) relative to where the stock should be valued at based on the two downside guidance revisions. 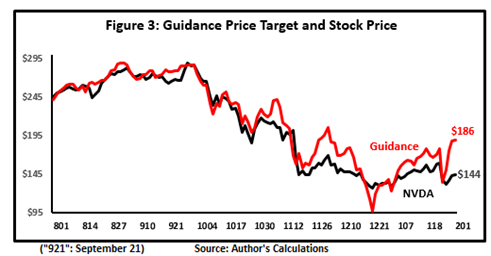 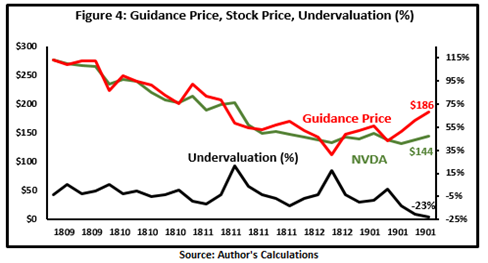 Starting 2H 2018, Nvidia’s legendary stock has entered a new phase. Most likely, the historical year-to -year over 200% annual growth will not be back in the near future. Investors need to come to the ground that stock prices should be valued at the forward-looking financials in the long run. We have learned that harsh lesson from Nvidia’s two surprise downside revenue guidance revisions. In this post, I used management’s perspective to estimate the proper Nvidia’s share price reaction to its guidance changes. The evidence suggests that Nvidia’s shareholders have overreacted to the negative information conveyed by the downside revenue guidance. If just looking at guidance changes alone, Nvidia's shares have been traded at a $40 discount or undervalued by 23%.

Kwan-Chen Ma
11.99K Followers
K C Ma, Ph.D, CFA, is the Eminent Scholar and the Mary Ball Washington/Switzer Brothers Endowed Chair of Finance at University of West Florida. I am the Director of Argo Investments Institute which enables college students to manage real money stock, bond, and option funds. I manage market-neutral institutional hedge funds in KCM Asset Management. I write about stocks, bonds, and derivative strategies, long or short, based on our quantitative processes.
Follow

73 Comments
To ensure this doesn’t happen in the future, please enable Javascript and cookies in your browser.
Is this happening to you frequently? Please report it on our feedback forum.
If you have an ad-blocker enabled you may be blocked from proceeding. Please disable your ad-blocker and refresh.