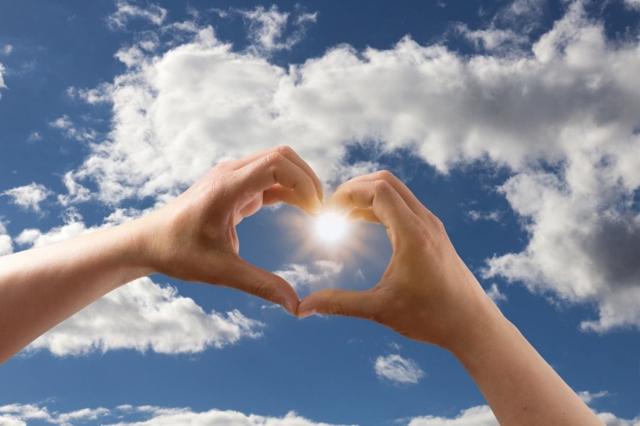 Well, we’re disappointed to report our first forecast error of 2019.

The S&P 500 Index rebounded from the 4Q2018 sell-off, returning 8.0% in January while the 12-month forward price/earnings multiple expanded from 14.5x at the end of December to 15.9x at the end of January (based on Bloomberg earnings estimates). The January effect led to the strong recovery of the most beaten down risk-based assets; while safe-haven segments like low volatility stocks lagged the broader market recovery.

Where did we err? In the 2019 Outlook section of our 2018 Year-End Market Commentary, we wrote:

Instead, forward equity valuations expanded – resulting in lower, rather than higher, equity risk premiums. The S&P 500 forward P/E multiple rose despite a continued slowdown in earnings growth forecasts. According to Factset’s Earnings Insight (1/25/2019), the consensus forecast for S&P 500 earnings growth in Calendar-Year 2019 (CY19) has dropped to 6.3% (revenue growth of 5.2%%), down from 7.9% (revenue growth of 5.3%) expected towards the end of December.

While the path for future earnings growth looks more certain, investors are now demanding a lesser premium for holding U.S. stocks despite the more muted outlook for CY19 earnings growth.

Hence, the S&P 500’s gain of 8.1% more than exceeds the 6.1% earnings growth now expected in CY19. And Wall Street analysts may continue to ratchet down their expectations, as companies report their 4Q earnings and provide forward guidance, acknowledging the more challenging macro environment. Like January 2018, U.S. investors have more than clipped their earnings coupon and are now discounting a healthy rebound in estimates going forward.

Other markets have also enjoyed this rebound in forward valuations and lower risk premiums. Figure 1 displays the expected earnings trend (white lines) for major market indices against their forward price/earnings multiples (colored lines). Except for EM Small Cap, all major regions saw an expansion in their multiples in the face of declining earnings growth expectations. EM Small Cap is bucking this downward trend with analysts raising their earnings forecasts – likely due to lower commodity prices, a Fed on hold, and expectations of a Chinese stimulus. We may be seeing a recovery in, or stabilization of, earnings estimates for Emerging Markets (MS Emerging Markets) and U.S. Small Caps (Russell 2000). 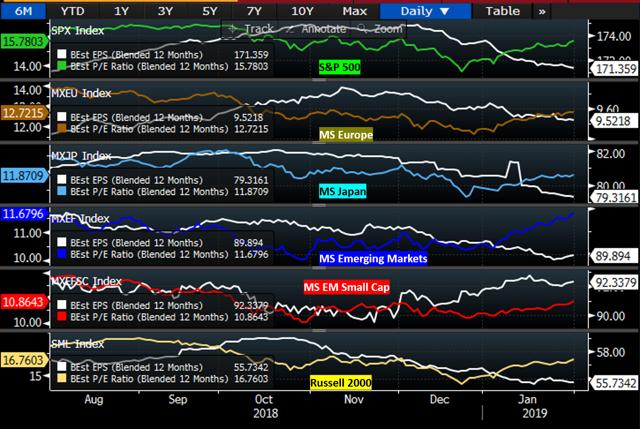 Source: Bloomberg as of 1/31/2019 using Bloomberg estimates for EPS and P/E

However, we’ll gladly trade our macro/market forecasting prowess for the hope that January’s equity market strength continues into the rest of the year – despite prevalent signs of a global growth slowdown as indicated by worldwide manufacturing sentiment surveys and slowing business conditions (Figures 2 and 3).

Investors are already looking to the future: 1) U.S./China trade agreement to head off the March 1 deadline of additional U.S. tariffs; 2) Brexit resolution or delay to avoid a ‘hard’ exit at the end of March; and 3) an accommodative Federal Reserve that did a 180 degree turn from its early 4Q2018 comments concerning rate hikes and balance sheet normalization. #3 has already revived as Fed officials intimated that future decisions on interest rates and balance sheet reductions would largely depend on near-term economic data – or be more data-driven around financial pricing and liquidity conditions. Perhaps the 4 th quarter 2018 weakness will turn out just to be a scare, and the Fed, Trump Administration, and China can engineer a global soft landing (more on China below).

Hope and a Fed

Brian Wesbury, Chief Economist at First Trust is still arguing that nominal GDP should anchor a normal Fed rate, implying 3-4 rate hikes in 2019 rather than one rate hike now priced into Fed Funds futures. But, in his 1/30/2019 blog note, he acknowledged that the Fed ‘doves’ have won the day as the Fed has capitulated to the market stress from last quarter. Following the January FOMC meeting, the Fed acknowledged the current strength of the U.S. economy, but also removed language that called for gradual rate increases, and referred to global developments pointing towards near-term weakness and moderating inflation.

Wesbury identifies the Fed’s fear of inverting the U.S. Treasury Curve, which many have been interpreted as a meaningful recession signal, as the primary motivator for adopting a more dovish stance on rate hikes. Ultimately, economic fundamentals should overcome market jitters, but the doves appear to be in charge as long as the data supports ‘patience’ and not ‘gradual normalization. The market agrees and is forecasting no rate hikes for 2019 (Figure 4).

Having said that, many of the market-based indicators that prompted a course-correction by the Fed have flipped from ‘flight’ to ‘excite.’ Apart from the strong performance of global equities in January, many risk-based indicators like commodity prices (Figure 5), corporate credit spreads (Figure 6), and forward inflation expectations priced into TIPs vs Nominal Treasuries (Figure 7) have turned around. Reflexivity can work both ways, and exuberant capital markets refreshed with animal spirits could prompt the Fed to return to its 2018 hawkish stance. But for now, it appears the Fed has adopted a ‘Wait-and-See Approach’ on setting interest rates and reducing their balance sheet.

A ‘Wait-and-See’ approach to 2019 Fed decision-making may seem even more prudent given the overhang of a slowing Chinese economy. China’s weakness is showing up in slowing trade activity reported by China’s major trading partners from semiconductors (Japan and S. Korea), autos (Germany), and tourism (Australia). A China slowdown does not necessarily portend a global contraction, but there are now reports that Chinese technology titans Baidu, Alibaba, and Tencent have slowed their hiring, putting at risk the Communist Party’s goal for stabilized employment. Caused in part by excess financial leverage, this slowdown may perhaps be ‘contained’ similar to Japan’s deflationary slowdown over the past three decades. (We originally wrote about this scenario in “Reaching the Macro Inflection Point”).

For now, a looming China slowdown has not dented the recovery in global risk appetite: both global equities and corporate credit rebounded sharply in January. Global stocks (MSCI All-Country World Index or ACWI) returned 7.9% led by Emerging Markets (8.8%) and the S&P 500 (8.0%), while Japan and Europe lagged, returning 6.6% and 6.1%, respectively (Figure 8).

Within U.S. Stocks, the January effect manifested itself with small caps outperforming large caps and value outperforming growth (Figures 9a and 9b). 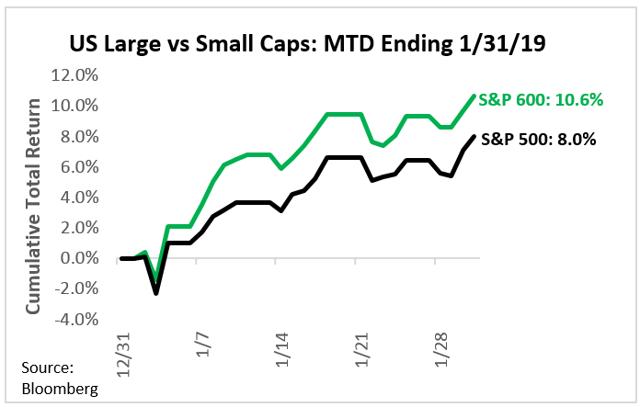 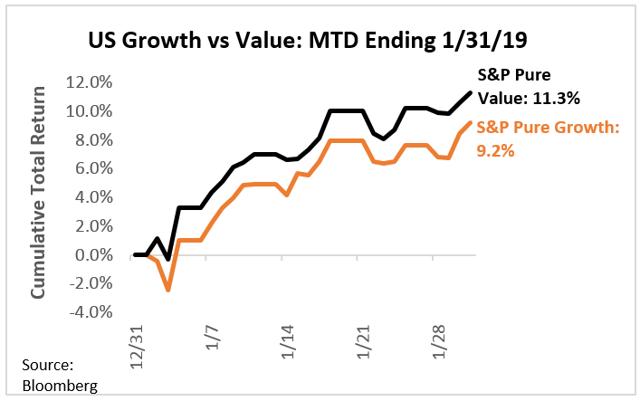 Value’s outperformance over growth shows up in sector performance with industrial and energy sectors leading all S&P sectors in January (Figure 10). The underperformance of defensive sectors was not uniform: Real Estate outperformed both the broader market as well as Utilities, which should have benefited more from the month-end drop in long-term interest rates, but was negatively impacted by the PG&E bankruptcy filing.

We believe the markets are pricing in a slowdown but not a recession, based on January’s strong performance following dovish Fed policy-signaling and a thawing in the U.S./China trade dispute. We think global equities got ahead of themselves in January as market valuations expanded in the face of a slowing earnings growth environment (emerging markets, notwithstanding).

However, the outperformance of small cap over large cap as well as the recovery in commodity prices appear to indicate that this elongated business expansion going back to 2009 appears to have more room to expand, although at a slower pace. Whether the Fed (and China) can engineer a soft landing that maintains the current global growth cycle, while not prompting global central banks to tighten, remains to be seen.

The above is the opinion of the author and should not be relied upon as investment advice or a forecast of the future. It is not a recommendation, offer or solicitation to buy or sell any securities or implement any investment strategy. It is for informational purposes only. The above statistics, data, anecdotes and opinions of others are assumed to be true and accurate however 3D Asset Management does not warrant the accuracy of any of these. There is also no assurance that any of the above are all inclusive or complete.

Past performance is no guarantee of future results. None of the services offered by 3D Asset Management are insured by the FDIC and the reader is reminded that all investments contain risk. The opinions offered above are as of February 4, 2019 and are subject to change as influencing factors change.