Americans love paying big profit margins for big equipment, and automakers love them for it, but total sales are declining, and something doesn't add up.

For the industry as a whole, the average transaction price in January, according to estimates by Kelley Blue Book, jumped by $1,481, or by 4.2% from a year earlier, to $37,149. These are based on prices paid by retail customers before factory incentives are applied. The average transaction price for full-size pickup trucks jumped by 5.3%, or by $2,500 from a year ago, to nearly $50,000. But Americans spurned the $16,000 small cars.

This has been the theme year after year: higher, and sometimes much higher dollar amounts for new vehicles, particularly trucks, even as the overall number of new vehicles sold has declined.

While this has caused a bunch of gray hairs because over the longer term, this is not the way to go, automakers have focused on what Wall Street wants to hear - particularly Ford, whose sales dropped back into the 2013 range: We're selling fewer vehicles but we're charging more money for each of them, and so we're not worried.

There are two factors at play in these rising average transaction prices.

This shift by US consumers away from lower priced and lower margin cars to higher priced and higher margin "trucks," meaning compact SUVs (crossovers, which are based on cars), pickups, and SUVs, is not new. This trend has been going on for years. But it has reached a critical mass to where automakers are now shutting down car production plants in the US, to focus on making what sells.

And American consumers, often assumed to be astute and price sensitive, are favoring and buying the vehicles with the fattest profit margins: full-size pickups, which include the top three US bestsellers in 2018 with combined sales of over 2 million:

The next three bestsellers are compact SUVs ("crossovers"):

The chart below shows how the dynamics between cars and "trucks" (crossovers, pickups, SUVs, and vans) have developed over the years - and Americans are just willing to pay a whole lot more for "trucks" than for cars, and hence higher average transaction prices. 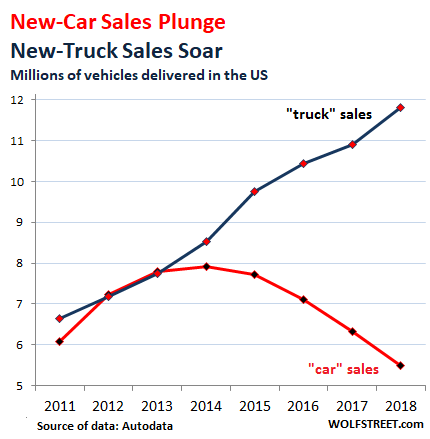 Price increases in the hottest segments

Manufacturers raise prices on trucks because they can. The average transaction price has risen because automakers have raised prices within the hottest segments that already have the fattest profit margins, particularly full-size pickup trucks.

Even the average transaction price of compact crossovers - which are based on compact cars in terms of the chassis, powertrain, and many other components and don't cost a lot more to manufacture than their equivalent cars - rose to $29,039.

High-performance cars, such as Porsches, experienced 5.5% increase in the average transaction price ($113,800), but sales are tiny, compared to the overall market, and they really don't matter that much.

Below is the list by segment of average transaction prices in January, and their changes from a year earlier. There are also four price decreases on that list, including two luxury car segments: high-end luxury car (-3.8%) and luxury car (-0.9%) (data via Kelley Blue Book):

For automakers, the conundrum is this: Compact and subcompact cars have paper-thin profit margins, and so they're not pushing them very hard. The money is in trucks. And that's where much of the marketing dollars go. But compact and subcompact cars are out there, and if Americans really wanted to buy small economical cars and save a ton of money on purchasing costs, interest, and fuel, they could. But not many do.

This conundrum can be further complicated by fuel prices, which can wreak havoc on production planning by automakers. In the past, surging gasoline prices have caused consumer preferences to shift to more economical vehicles. But when gasoline prices fell again, those preferences shifted back to trucks with a vengeance.

At the same time, even as the average transaction price has surged year after year, total new-vehicle sales have declined in what is a brutally mature market, with new-vehicle sales in 2018 just below where they'd been in 2000. This makes for 18 years of stagnation with a huge trough in the middle during the Financial Crisis. But price increases and the shift to more expensive higher-profit margin vehicles have kept the dollars rolling for automakers.

Somewhere there is a cause-and-effect relationship between declining unit sales and higher prices, but it is not clear where this relationship is because Americans most eagerly buy the highest-profit margin vehicles (pickups) while at the same time spurning subcompacts that sell for a third of the price.

Global auto sales: And This Isn't Even a Global Recession Yet. Read… The Wolf Street Report

Wolf Richter
3.99K Followers
Wolf Richter is the publisher of wolfstreet.com, a site focused on business, finance, and money. The site is free. In addition to the many years at wolfstreet.com and its predecessor site, he has 20 years of C-level operations and finance experience.
Follow
4 Comments
To ensure this doesn’t happen in the future, please enable Javascript and cookies in your browser.
Is this happening to you frequently? Please report it on our feedback forum.
If you have an ad-blocker enabled you may be blocked from proceeding. Please disable your ad-blocker and refresh.