The latest FOMC statement and press conference certainly gave investors all they wanted to hear when it comes to Federal Reserve “flexibility,” which was a major issue in the 4Q-‘18 sell-off in the stock market.

“Patiently awaiting greater clarity,” as Jerome Powell put it last week, is very different than the “autopilot” gaffe he delivered on December 19, 2018, sending stocks down. Perhaps Jerome Powell has learned that as Federal Reserve Chairman it’s not just what you say but how you say it that moves the markets. Still, it has to be acknowledged that the numerous Twitter attacks from the President may have goaded the Fed Chairman into taking a firmer stand, which regrettably backfired in the stock market.

My thesis remains that there will be a trade deal with China by the March 1 deadline and, if enough progress is made, it is possible that the final deal will be made at a somewhat later date without tariffs on Chinese goods going from 10% to 25% on March 1. I believe that the announcement of a trade deal with China will serve as a catalyst for the U.S. stock market to retest its all-time highs.

U.S. stocks have already erased about two-thirds of their fourth-quarter losses (blue line, below). 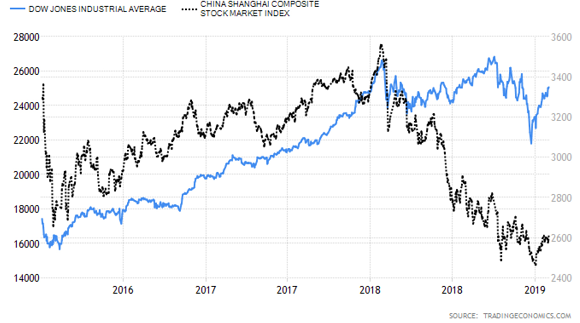 I don't believe that anyone is looking for economic reacceleration in the United States in the second half of 2019, but when President George W. Bush passed his tax cuts in 2003, there was a surge in economic activity, a breather of sorts, followed by another surge. Is it possible that the economy will take a breather in the first half of 2019 and then reaccelerate in the second half? It sure is, but such a notion has not been embraced by a majority of investors. If that happens, the S&P 500 should trade above 3000 by year-end.

Implications for the U.S. Dollar

I see a lot of positioning for an end to the U.S. dollar rally, given the outlook for a more patient Fed, but I believe that such positioning is premature. If indeed there is a second-half re-acceleration in the U.S. economy, Fed rate hikes would resume. But it’s not only the Fed rate hikes driving the dollar. The Fed balance sheet unwinding has continued, and it does not show any indication of stopping (or accelerating).

On the other hand, the European Central Bank (ECB) stopped expanding its balance sheet in December 2018. There was talk of “normalization” starting in 2019, which I do not believe will happen this year. With the Fed continuing to unwind its balance sheet and the ECB not unwinding, given a weakening eurozone economy and the Damocles' sword of Brexit, it is possible for the U.S. dollar rally to resume.

The euro has certainly rebounded after the end of ECB balance-sheet expansion, but since it is highly unlikely the ECB will shrink its balance sheet in 2019, this rebound is highly suspect. Due to the euro’s disproportionate 57.6% weight in the U.S. Dollar Index, I think the thesis that the U.S. dollar has topped out is misguided. 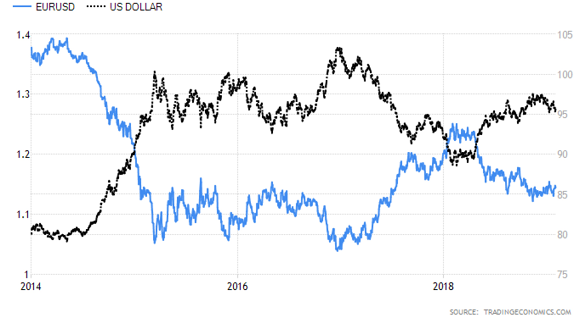 Another reason why the euro rebounded somewhat is that the interest rate differentials (as measured by 10-year bonds) shrank somewhat. On a closing basis, the high in 10-year Treasury yields hit in October 2018 was 3.23%, and that same rate was 2.68% last week. The recent high in 10-year German bund yields was 0.56% in October 2018. The bunds closed last week at 0.17%, trading intra-week at 0.10%. 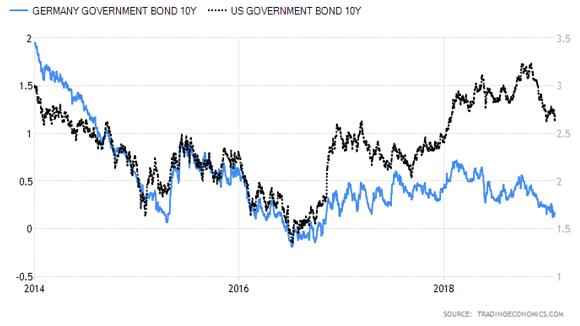 Since October the Treasury/bund spread has dropped from 267 to 251 basis points at last count. That’s not much shrinkage, but there is some narrowing in this interest-rate differential. Since there is a record supply of Treasuries in 2019, due to the Trump tax cuts, it would not be inconceivable for the Treasury-bund spread to expand again, particularly if the Fed’s balance sheet runoff rate does not decelerate.

Any foray into business or economic forecasting starts with three basic scenarios: best-case, base-case, and worst-case. The base-case scenario, in my view, even with a Brexit deal, is that Europe will continue to stagnate, and the U.S. economy will do well in 2019.

That would make a rebound in the U.S. dollar highly likely.

Ivan Martchev
1.34K Followers
Ivan Martchev is an investment strategist with Navellier Private Client Group. Previously, Ivan served as editorial director at InvestorPlace Media. Ivan was editor of Louis Rukeyser's Mutual Funds Newsletter and associate editor of Personal Finance Newsletter. Ivan is also co-author of The Silk Road to Riches (Financial Times Press). The book provided analysis of geopolitical issues and investment strategy in natural resources and emerging markets with an emphasis on Asia. The book also correctly predicted the collapse in the U.S. real estate market, the rise of precious metals, and the resulting increased investor interest in emerging markets. Ivan’s commentaries have been published by MSNBC, The Motley Fool and others. Currently Ivan is a weekly editor of Navellier’s Market Mail and a contributor to Marketwatch.