Even equity research analysts are down on Q1 earnings prospects.

The weight of evidence strongly suggests the bears will be disappointed.

If the current market environment seems dull, it’s because participation has declined as the major averages continue their slow, steady upward grind. Trading volume has declined in recent days as the Dow and S&P 500 Index (SPX) approach the November-December highs. The market’s decided lack of volatility has lulled many investors asleep, which is a shame because there is still plenty of upside potential left. In today’s report, we’ll examine the areas of strength in this market that analysts are ignoring, as well as look at some upside targets for SPX.

The stock market hasn’t had a meaningful dip since bottoming on Dec. 24. This fact, combined with a diminution of volatility as reflected in the CBOE Volatility Index (VIX), has resulted in declining interest among traders. While the bears are still growling here and there, the bulls have become strangely silent. More than a few commentators have expressed the opinion that the extended rally from the December lows has nearly reached its terminus. 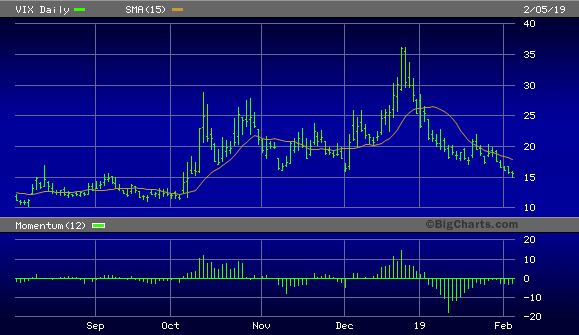 One example of the belief that the market can’t rally much more than it has was found in a recent commentary that made the rounds on the Internet. The article focused on research by Dana Lyons of J. Lyons Fund Management, who went to great lengths to prove that the stock market is as technically overstretched as it has been in decades (based on “exponential regression smoothing” of the S&P Composite’s long-term trend line). While this makes for an interesting statistical exercise, it misses the point that while stocks may be temporarily “overbought,” there is still plenty of incremental demand for equities to keep the recovery alive. 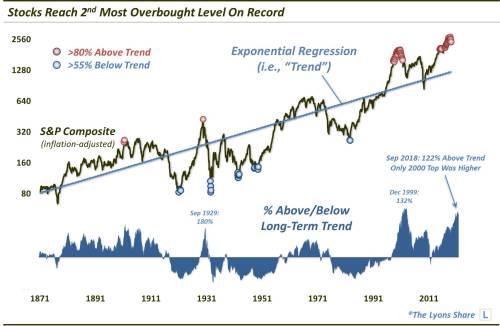 One example of this incremental demand is the powerful upside momentum reflected in the NYSE advance-decline (A-D) line, below, which underscores the strong breadth behind this rally. The fact that the A-D line is leading the major indices and has nearly recovered all its losses from the last few months should be a comforting sign for the bulls. For when the A-D lines show this much relative strength, the major averages nearly always follow this lead. The most important takeaway from this chart is that despite the potentially “overstretched” nature of this market, there are no signs of a slowdown in the demand for stocks.

An even more powerful sign that the demand for equities is exceptionally strong right now is plainly visible in the following chart exhibit. This shows the ratio of the new 52-week highs and lows on the NYSE. As you can see, the new high/new low ratio has already completely recovered its losses from the final months of 2018 and is at its highest level since early 2017. This indicator, more than perhaps any other, demonstrates just how strong the demand for equities has been since the December correction low.

That’s because the new 52-week highs and lows serve as the ultimate reflection of incremental demand. With far more stocks making new highs than lows recently, the internal momentum behind the market rally is assuredly strong and sufficient to carry the major averages to higher levels. As I’ve emphasized in these reports, until we see a decisive reversal in the rising trend of the cumulative 52-week new highs-new lows, investors should continue to assume a bullish posture.

Despite the solid technical and fundamental evidence that this market is firmly in the bulls’ control, many bearish analysts can’t resist the temptation to assume a worst-case scenario. Another recent example of this is found in a widely circulated online article discussing the possibility that stocks are in a “bull trap.” The article also mentioned the oft-repeated observation that today’s market is similar to the 2000 and 2007 peaks, even though the market’s internal profile (as mentioned above) is far stronger now than it was prior to the 2000 and 2007 tops.

A big reason then why investors are sleeping on this market is because they believe that the rally since December has exhausted its upside potential. This is a common belief whenever a market has seen a major decline, then rallied to a benchmark price level. In this case, the nearest benchmark for the SPX is the 2,800 level. The 2,800 level shows up as having technical significance in the following graph, for the area immediately around this level is where the SPX encountered strong resistance during the month of November. In fact, two rally attempts at that time were turned back at the 2,800 level in November and led to the bears completing their takeover of the market trend prior to the December plunge. 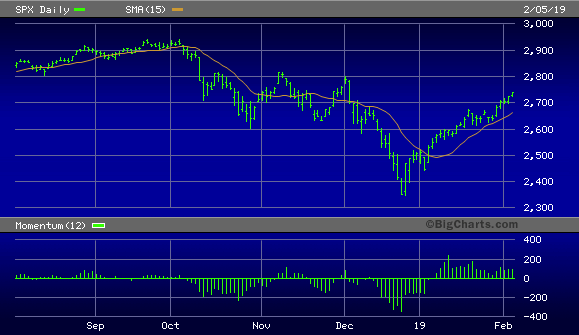 As technical traders are well aware, price levels which formerly served as “resistance” to a rally tend to have significance whenever they are tested again. Since the SPX is well on its way to test the 2,800 level, investors can expect some degree of psychological reaction as this level is approached. That is, some participants will be taking profits when this level is reached while others will no doubt initiate short positions on the assumption that 2,800 is an insurmountable obstacle. This would be a mistake, however, based on the powerful internal momentum reflected in this market and discussed here. While the SPX may initially encounter resistance at 2,800 and temporarily pull back, I expect the index to eventually propel above this level and continue its climb to the late September high.

Market technicians aren’t the only ones sleeping on the stock market’s growth potential, however. Even research analysts have lowered earnings estimates for S&P 500 companies for the first quarter of 2019. According to a FactSet report:

This represents the biggest decline in the bottom-up EPS estimate during the first month of a quarter since the 5.5% drop in estimates during Q1 2016, according to FactSet. It should be noted, however, that earnings estimates for Q1 2019 have been declining in the last few months. It’s also worth mentioning that there hasn’t been a year-over-year decline in S&P 500 earnings since Q2 2016. 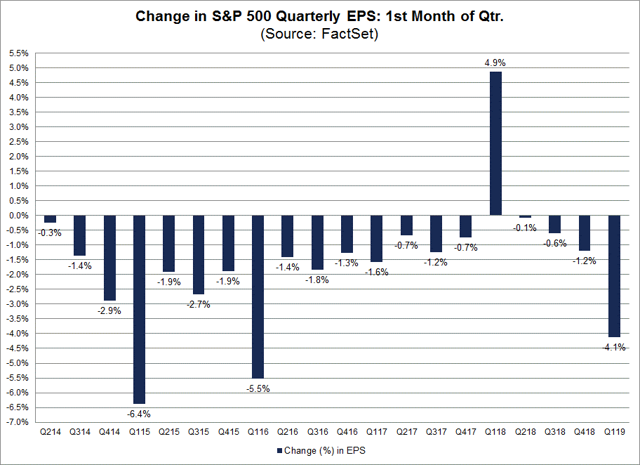 If nothing else, the bearish skew in analysts' estimates for S&P 500 companies lowers the bar for even more earnings surprises in the next quarterly earnings season. Analysts have been consistently underestimating the earnings growth potential for companies in the last several months, and the near future should prove to be no exception as earnings and revenue growth remains strong, with the S&P 500 enjoying its best January in 30 years.

In closing, I can only continue emphasizing that as long as corporate fundamentals remain strong and the NYSE internal indicators - including the advance-decline line and new high/new low ratio - are in a rising trend, investors are justified in leaning bullish. Based on the evidence which we’ve discussed here, it would be a mistake to underestimate this market’s upside potential, and an even bigger mistake to sell this market short.

On a strategic note, some conservative buying can still be done in the sectors and industries which are showing the most relative strength and solid fundamentals. In particular, investors should be looking at consumer staples, pharmaceuticals, and real estate equities, as well as the tech sector in general.

Disclosure: I am/we are long SPHQ, IAU, XLE. I wrote this article myself, and it expresses my own opinions. I am not receiving compensation for it (other than from Seeking Alpha). I have no business relationship with any company whose stock is mentioned in this article.