The data center REIT sector had a rough year in 2018. For the first time ever, its total return, -16.1% on an equal-weighted basis and -13.7% on a market cap weighted basis, was more than 650 basis points (or bps) behind the -4.5% and -7.1% total returns of the MSCI US REIT Index (Bloomberg: RMS G) and the S&P 500 (Bloomberg: SPX), respectively.* What happened, and should long-term investors in the space be concerned?

In late 2018, we posed these questions to the publicly-traded data center companies and many large dedicated and non-real estate dedicated experts. There was a strong consensus that the worst performing data center REIT, QTS Realty Trust (QTS), primarily sold off for company-specific reasons. QTS took a huge write-down on its cloud and managed services businesses in February, effectively guiding to a 15% roll-down in revenues as it became the last large public data center owner/operator to admit that it could not compete in the space with Amazon (AMZN), Microsoft (MSFT), Google (GOOG) (GOOGL), and IBM (IBM). For the rest of the data center REITs, there was a general agreement that drivers of underperformance were (a) the global tech selloff in 3Q18 and 4Q18 and (b) decelerating per share earnings growth and guidance for '18 and '19.

While we were frustrated by both (a) and (b), our discussions revealed that many investors sold data centers in 2018 because they feared that (a) and (b) were connected. Specifically, they believed that the primary causes of the tech selloff - lofty valuation multiples, decelerating top-line growth, angst over Chinese GDP and trade, and growing regulatory risk - were reducing cloud service provider (or CSP) and enterprise demand for data center space. This could not be further from the truth. In fact, our research indicates that demand for wholesale data center space hit an all-time high in 2018 and shows no signs of abating.

As a result of the 2018 underperformance, data center REIT net asset value (or NAV) discounts are near post-GFC highs, despite unprecedented private equity interest and investment in the space. Even if this wall of private capital does not shrink data center REIT discounts to NAV, we believe that high single-digit per share cash flow and dividend growth should translate into 10-15% average annualized total returns over the next few years.

Correlation Does Not Equal Causation

Large technology companies and CSPs (called hyperscalers) are easily the biggest tenants of data center REITs, so it is not surprising that they would tend to trade together over short periods of time. Data center absorption statistics are notoriously approximate, but most industry research firms believe that these companies have been responsible for close to half of all data center development and leasing over the past few years. Much of the tech selloff was fueled by concerns about the long-term deceleration in cloud segment revenue growth at some of the largest hyperscalers. Figure 1 illustrates this trend for the cloud platforms of AMZN and MSFT, AWS and Azure. These are the two largest CSPs in the world, with 49% share of the global cloud infrastructure services market in 3Q18, according to Synergy Research Group. 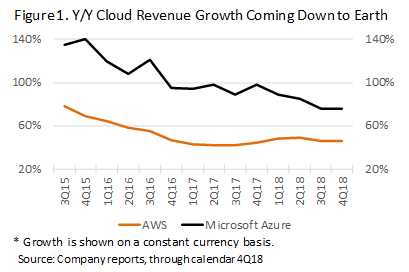 Given this slowdown, one would expect to see data center net absorption (leasing activity net of move-outs) to decelerate, as well, but it has actually done the opposite. Thus far, only one of the industry's research firms, datacenterHawk, has published full year 2018 leasing numbers, but the results are stunning. 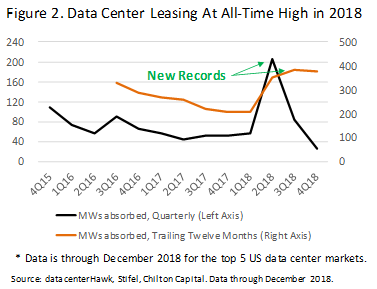 For the five largest US markets - Northern Virginia, Northern California, DFW, Chicago, and Phoenix - datacenterHawk reported net absorption of 377 MWs in 2018. This is a new record, beating the previous record by 32% and 2017 absorption by 81%. Figure 2 shows historical absorption in these markets, which make up about 70% of wholesale multitenant data center capacity in the US.

datacenterHawk 4Q18 numbers update and confirm the 1Q18-3Q18 data that have been published by CBRE (CBRE) and JLL (JLL), which show that the top five markets, the top ten markets, Northern Virginia, London, Phoenix, and the combined FLAP markets (Frankfurt, London, Amsterdam, and Paris) all put up new quarterly and annual absorption records in 2018. 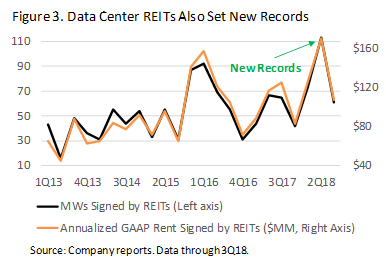 In 2Q18, developer CloudHQ signed the biggest data center lease ever with Facebook (FB) for 72 MWs in Northern Virginia, more than doubling the previous 35 MW record set in 2016. According to North American Data Centers, there were six 20+ MW leases signed through in the first 11 months of 2018, as many as were signed over the previous five years combined! 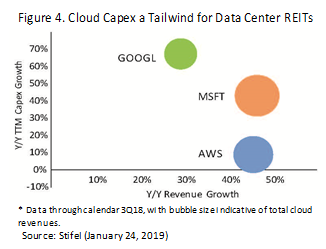 Growth also showed up on the cash flow statements of the hyperscalers, capital expenditures (or capex), and capital lease acquisitions in 2018. Figure 4 plots Stifel's best estimates of cloud capex growth against revenue growth for AWS, Azure, and GOOGL. Through 3Q18, both GOOGL and MSFT capex actually accelerated year over year, and AWS would have as well had it not already grown capex and lease expenses by 77% in 2017.

Cloud capex should not consistently grow faster than cloud revenue, but it can keep up with it for longer than most people think. Cybersecurity concerns, data sovereignty, private cloud adoption, and lower latency requirements, combined with long-term declines in the price of cloud storage, have led CSPs to become more redundant and distributed, requiring more data center spend per gigabyte of cloud storage. But they also lower margins for CSPs. As long as these trends continue, it is possible that data center capex can keep up with or exceed the growth rate of cloud services cloud revenue.

If demand for data centers is so strong, why has recent cash flow per share and same store revenue growth been so light? Our research and channel checking suggest two likely culprits: initially dilutive mergers and acquisitions (M&A)/portfolio recycling and increased supply.

High-priced M&A is another example of data center REITs being the victims of their own success, for it was their history of mid-teens unlevered development yields that caused private capital to flow into the space. Public and private investors now feel more comfortable paying mid-to-high single digit stabilized yields for mission-critical wholesale colocation assets leased to high-credit tenants on long-term leases, compared to the low teens returns they used to insist upon for such deals. This will remain a headwind to cash flow per share growth as long as data center REITs keep making large portfolio/company acquisitions. It will dissipate if they allocate more of their money to ground-up development, though development yields will likely trend lower as well.

Long-time investors in data centers are used to high levels of new supply, as this has been necessary to keep up with the incredible growth in demand for cloud and outsourced IT services. However, supply finally seemed to eclipse demand in several low-barrier markets in 2018. Supply especially weighed on occupancy and rental revenue growth in Las Vegas/Reno, Phoenix, Dallas-Fort Worth, Richmond/Central Virginia, and Atlanta. Much of this is due to five private or non-REIT developers: Switch (SWCH), EdgeCore, STACK Infrastructure, PointOne, and CloudHQ. Together, these five companies have domestic development pipelines of approximately 1,500 MWs, 750 MWs, 450 MWs, 425 MWs, and 385 MWs, respectively. In contrast, supply is much lower in higher barrier wholesale markets such as San Francisco/Silicon Valley, and Los Angeles, as well as key global markets London, Frankfurt, Amsterdam, Paris, Hong Kong, Singapore, and Tokyo.

Finally, new supply is minimal in network-dense internet exchange point (or IXP) retail colocation facilities. In our April 2017 REIT Outlook, we compared these facilities to international airports, whose competitive advantage and network effects make them as close to monopolies as we have found in the real estate business. Equinix (EQIX) has long been the 800-pound gorilla in this business, but it has also increasingly become the most focused on it. In the last quarter of 2018, EQIX had an estimated 90% of its asset value coming from IXPs, down from ~95% at the end of 1Q16. CoreSite (COR) and DLR, by contrast, derived an estimated 31% and 28% of their asset value from IXPs in 4Q16, down from 37% and 36% three years ago.

The recent selloff of tech and data center stocks has put all data centers on sale, and we believe all well-managed data center REITs should benefit from strong secular tailwinds over the next few years, even if valuation multiples do not return to historical averages. In such a scenario, these REITs should outperform, as our analysis indicates they will soon return to sector-leading cash flow and dividend per share growth.

Chilton REIT Team
1.64K Followers
The REIT Team of Chilton Capital Management, a Houston-based investment adviser, is headed by co-portfolio managers Bruce Garrison, CFA, and Matt Werner, CFA. Mr. Garrison has over 40 years of experience analyzing public REITs both on the buy-side and the sell-side. Mr. Werner joined Mr. Garrison on the Chilton REIT Team in 2009. The REIT Team’s strategy primarily pursues investments in publicly traded real estate investment trusts (REITs) and real estate related entities based primarily in North America. The REIT Team believes public REITs are superior vehicles for investing in real estate due to their liquidity, transparency, and total return characteristics. Investing in public securities enhances the REIT Team’s ability to diversify by geography, sector, strategy, property, and tenant while maintaining portfolio liquidity. REIT property types include apartments, regional malls, shopping centers, lodging, office, industrial, self-storage, data centers/cell towers, and a variety of health care related facilities. The REIT Team focuses on traditional methods of security analysis; primarily research, critical thought and analytical depth, which are integral to their investment process. The REIT Team’s investment approach seeks to combine its real estate industry experience with traditional methods of security selection to make sound investment decisions in real estate companies. The Chilton REIT Team manages Separately Managed Accounts (SMAs) for high net worth individuals and institutions. Additionally, the REIT Team is the sub-advisor for an open-end investment company, the West Loop Realty Fund (tickers: REIIX, REIAX, and REICX). Before investing one should carefully consider the West Loop Realty Fund’s investment objectives, risks, charges and expenses. This and other information is in the prospectus and summary prospectus, a copy of which may be obtained by calling 800-207-7108. Please read the Fund’s prospectus or summary prospectus carefully before investing. The Fund may not be suitable for all investors. We encourage you to consult with appropriate financial professionals before considering an investment in the Fund. Liberty Street Advisors, Inc. is the advisor to the Fund. The Fund is part of the Liberty Street family of funds within the series of Investment Managers Series Trust. The Fund is Distributed by Foreside Fund Services, LLC. Chilton Capital Management, LLC is an independently owned and operated firm formed in 1996. Chilton provides investment advisory services for registered investment companies, private clients, family offices, endowments, foundations, retirement plans and trusts. For more information about Chilton Capital Management’s REIT Team, please visit www.chiltoncapital.com/reit/ or email info@chiltoncapital.com. Additional information about Chilton Capital Management LLC is also available on the United States Securities and Exchange Commission’s website at www.adviserinfo.sec.gov. The searchable IARD/CRD number for Chilton Capital Management LLC is 104592.
Follow

Disclosure: I am/we are long EQIX, CONE. I wrote this article myself, and it expresses my own opinions. I am not receiving compensation for it. I have no business relationship with any company whose stock is mentioned in this article.