Biogen (NASDAQ:BIIB) recently posted its Q4 2018 earnings, yet the stock barely moved. My backtests on the company’s earnings movements show this to be uncommon. BIIB has a rather consistent bullish post-earnings bias.

Today, we will dive into the earnings call to check management sentiment. A recent development hints that at least long-term sentiment is strong: Biogen Director Alex Denner recently acquired over $20M in BIIB shares. Insider buying (but not selling) has a statistically significant positive correlation with future stock movements.

I see this as Biogen management putting their skin in the game to an even greater extent. The company has been buying back shares at arguably high prices. Buybacks only make sense when the stock is undervalued, implying that at least Dr. Denner believes the future stock price to be considerably higher than the current price. 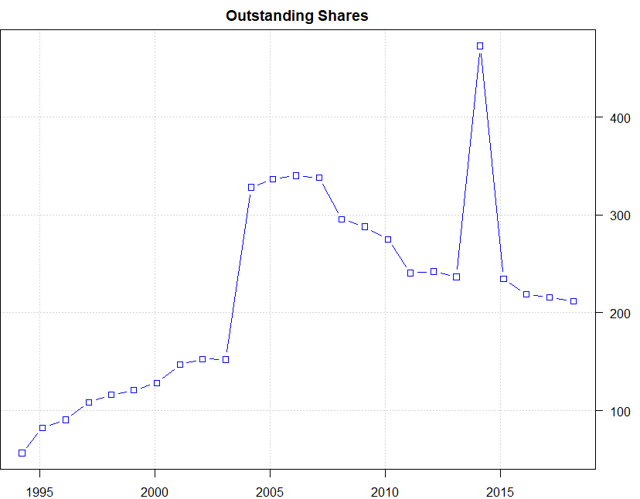 The recent insider buying flies in the face of the concerns from many BIIB investors. The company has seen its multiple sclerosis drugs, its main profit producer, struggle in an atmosphere with an increasing amount of competitors. In light of this, investors are wondering when the next new medical hit from Biogen will be discovered.

From A Financial Perspective, There Is No Concern

Still, the company is financially healthy. Its revenue stream, earnings, and free cash flows are growing. This is all without an increase in operating expenses. 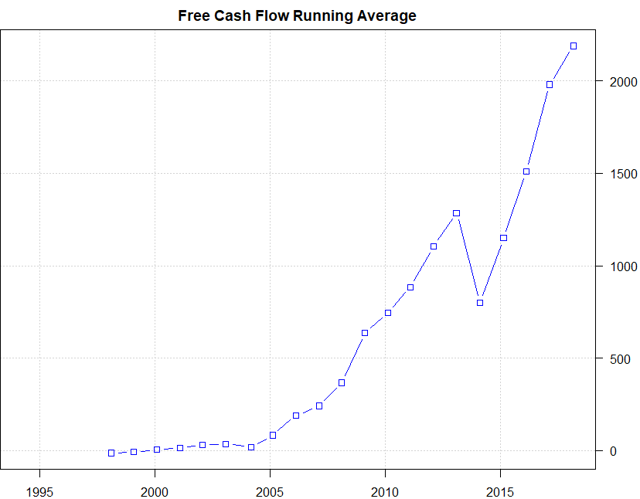 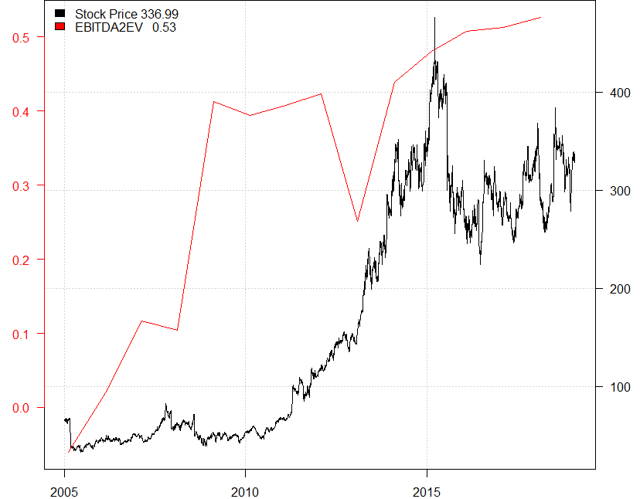 What is the concern? Biogen does have other profit-producers with high margins. Its orphan drugs, such as spinal muscular atrophy drug Spinraza, also give the company tax benefits (via the Orphan Drug Act of 1983). Yet Biogen’s other products simply don’t bring in the revenue that its multiple sclerosis drugs do. Do we care about overall revenue or earnings?

The future of biotech companies is harder to predict than those of other cases. However, for profitable biotech firms such as Biogen, we can at least analyze the company without too much speculation on the future of medicine. Financially stable biotech firms need not bank on a single product; past success implies future success.

And management seems to believe in that future success. At least according to its share purchase activity. But what of this quarter’s sentiment?

I ran a lexical analysis on BIIB’s earnings calls. We will look at the most recent earnings call sentiment in light of its previous calls’ sentiments. We will then dive into sentences flagged by my algorithm to highlight certain forward-looking statements. My algorithm uses the best practices in financial lexical analysis and is updated whenever important research papers on the subject are released.

My results on the analysis of BIIB’s Q4 2018 earnings call are short-term bullish but long-term neutral. Sentiment increased 41% quarter over quarter but showed only a negligible increase over its average sentiment. Put simply, Q3 2018 sentiment was rather low, whereas the current quarter showed a much more optimistic outlook (i.e., a return to baseline).

We will look at statements flagged by the algorithm. Some statements are negative; some are positive; others are mixed.

-A mixed statement showing continued international growth but at a slowing growth rate.

“So we expect the kind of the trends with regard to improvement to continue in the U.S., which is very encouraging and the outside the U.S.”

-A related statement. This is in regard to multiple sclerosis drugs. Excluding OCREVUS, Biogen expects 2019 to show similar performance to that of last year. Growth in the US precedes growth abroad, so we can assume Biogen will remain in a growth phase over the coming year.

“We also repurchased approximately 14.8 million shares for $4.4 billion, and we have about $2 billion remaining in our share repurchase program.”

-Perhaps some investors disagree with buybacks at this point. However, the fact remains: The stock will continue to see upward pressure. The buyback program is two-thirds of the way complete.

“… we have a strong and stronger engine for growth with all the enhanced pipeline that Mike spoke about, and we have very important landmark study readouts in the coming period, so this is a very exciting place to be.”

-Management sentiment is high for the pipeline. Unfortunately, outside of predicting clinical trial results, determining which products from the pipeline will add to the company’s bottom line proves unwieldy. Regardless, management remains confident.

“… last month we made the strategy decision to terminate our collaboration with AGTC to develop AAV-based gene therapies for X-linked retinoschisis or XLRS and X-linked retinitis pigmentosa or XLRP based in part on recent clinical data in XLRS.”

-One product removed from the pipeline. This can be seen as good or bad. Management portrays this as good, as the opportunity cost for this therapy is too heavy, given Biogen’s goals to niche itself as a neuroscience drug company.

“For 2019, we aim to continue our momentum and achieve our guidance.”

-A restatement of guidance.

All together, the novel information from the Q4 2018 release shows a return to baseline. Management is confident about future prospect, the company is in good financial standing, and the large pipeline should offer investors some relief about the potential damage to Biogen’s multiple sclerosis drug profits.

I see the results as both short term and long-term bullish. With BIIB tending to fare well at the beginning of the year, I suggest investors set their dollar cost averaging for the first quarter of the year: 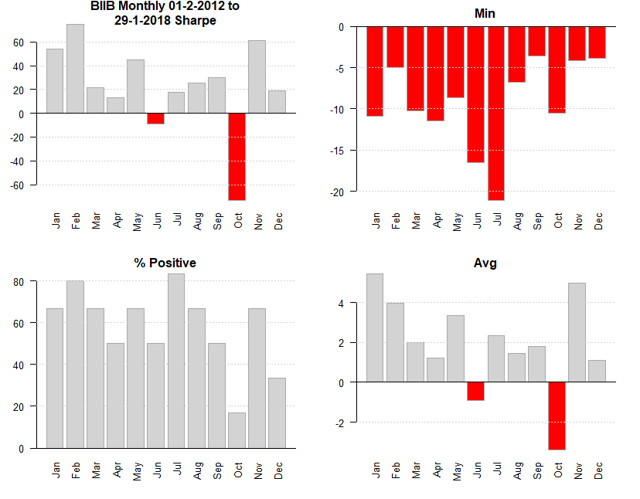 If you are really concerned with long-term reduced growth or short-term threats to the multiple sclerosis drugs, consider using long-term married puts or monthly long call ladders in conjunction with your long stock. Happy trading.