In my recent article “Offshore Drilling: Key Topics To Watch In Q4 Reports”, I argued that Seadrill (SDRL) must start contracting its rigs as it was not active on the contracting front during restructuring and it was high time to catch up with leading peers. Apparently, Seadrill is making its first major move – the company has just announced that it entered into a 50:50 joint venture with Angola’s Sonangol.

The new joint venture, Sonadrill, will operate four drillships – two from Sonangol (Libongos and Quenguela, both currently under construction in South Korea) and two from Seadrill. The company noted that Seadrill drillships will come from either existing owned or managed fleet. Drillships will receive 5-year contracts.

Seadrill commented: “Sonadrill will give us the opportunity to gain incremental access to a market that is expected to show significant growth over the next years, further strengthen our relationship with key customers and provides an attractive opportunity to continue expanding our fleet of premium ultra-deepwater rigs”.

So, what drillships may potentially take part in this endeavor? As per the press release, there are two options – employing owned drillships and managed drillships (Seadrill Partners (SDLP)). 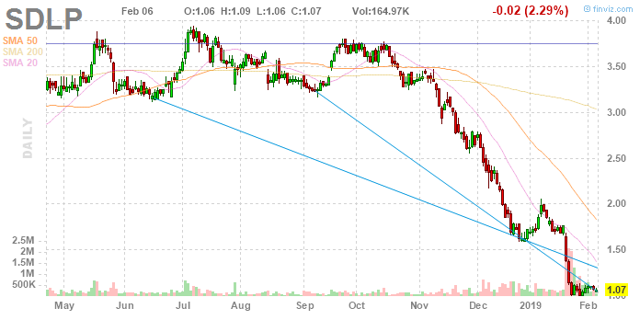 The market did not pay much attention to news about the Angola joint venture. Perhaps, the lack of details is the main reason – we don’t know neither the drillships that will be employed from Seadrill side nor the dayrates. However, if it turns out that West Polaris will be among the employed rigs, Seadrill Partners’ units might have a speculative boost.

I’d watch this closely although at current point it looks more likely that Seadrill Partners units’ will break out to the downside, below $1.00, rather than to the upside in absence of catalysts (assuming the market does not change its mind on Angola news until the company reports its quarterly earnings). Seadrill shares are now heavily influenced by Seadrill Partners’ dynamics (not surprising as Seadrill Partners’ survival with the current capital structure is at stake) so I won’t expect them to show good dynamics without at least some positives on Seadrill Partners in the near term.