Invest With An Edge
655 Followers

A quantitative money management firm is all about indicators - indicators for the stock, bond, and gold markets, usually. These indicators are tactical in nature - that is, they tell you when to be invested in the asset and when not to be.

For some reason, February has always been the season of silly stock market indicators. Maybe it's because we are past the holiday season and all of the excitement of New Year's has been spent. So, the financial press turns its attention to creating articles about indicators that are of dubious value.

Here's a table of some of these indicators:

All of these indicators have great records since origination. Yet, 2018 demonstrated that in any given year they can be very wrong. These indicators, for the most part, have little chance of success. Over time, they will most likely revert to a 50-50 track record.

There is a reason for this. None of them have any underlying rationale for why they should be accurate predictors. "Correlation does not imply causation" is the statistician's maxim.

The league of the Super Bowl champion has no relationship to the actions of the stock market - and whether Punxsutawney Phil sees his shadow or which animal is this year's Chinese zodiac sign is not a worthwhile investment tool.

Of all of these indicators, only the January Effect has any underlying rationale tied to the market. You could argue that January sets the trend for the year. Its direction provides investors with confidence in the future.

Or it may be that it is an indicator of momentum and is supported by all of the reasons why momentum investing has worked for hundreds of years. In any event, if you buy the rationale, perhaps the January Effect indicator should carry some weight. After all, it has been right 85.71% of the time since 1950, with an average 11-month gain of 11.71% when a gain has been predicted. But... it too was wrong in 2018.

Of course, a quantitative money management firm wouldn't use these types of indicators. They are just novelties or market lore that the investment press or sports writers created (as was the case with Leonard Koppett, a sports writer for The New York Times, who first introduced the Super Bowl Indicator in 1978).

In developing indicators, we begin with why a particular piece of data should relate to another. Then, we look for the statistical significance of the relationship found. If that is satisfactory, the indicator may turn into a useful tool.

The advantage of dynamic risk management is that the strategies employed use numerous indicators. These can change and need to be actively monitored. Risk-managed strategies can do this for you.

Most importantly, each indicator is chosen not simply because it works, but also because there is a reason why it should - correlation does not imply causation.

Something big is happening in the gold market right now, and nowhere is that more apparent than in central banks of emerging economies. Last year was a watershed in the size of official gold purchases, as banks added an incredible 651.5 tons (worth some $27.7 billion) to their holdings, according to the World Gold Council (WGC). Not only is this a remarkable 74 percent change from 2017, but it's also the most on record going back to 1971, when President Richard Nixon brought a formal end to the gold standard. In the final quarter of 2018 alone, central banks purchased as much as 195 tons, the most for any quarter on record, according to leading precious metal research firm GFMS.

Gold was up 1.33% last week and is 2.68% higher this year. Bonds had much smaller gains, around 0.5% for the week on the various longer-term ETFs. Bonds are about even for the year, with gains of about a fraction of 1%.

With the shutdown over (for the time being, anyway), last week the government released a flood of economic reports going back to November. While more than half underperformed expectations, the most important economic factors were almost universally positive. Housing sales, monetary factors, and manufacturing indexes were all better than expected.

Of course, the big surprise was how hot the nonfarm payroll numbers were. They blew away all of the pre-release estimates. The Citi Economic Surprise Index moved higher into solidly positive territory, as well.

This improvement in economic numbers provides a comforting backdrop to the earnings reports still pouring in and the Federal Reserve's sudden dovish stance. 64% of earnings reports and 54% of revenue reports have surprised to the upside. Better still, the stock market's response to the surprises has been substantially greater than normal. 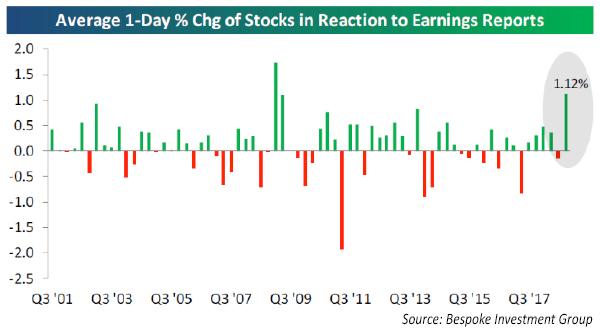 Stocks have finally reached overbought status, one standard deviation above their 50-day moving average. This would normally be a good place for a pullback. However, market sentiment numbers from the American Association of Independent Investors tell us that the amount of bullishness among investors is still below normal and has actually been falling-hardly a sign of overenthusiasm.

Finally, there is currently more value in the stock market than we have seen in a long time. Part of this is due to the sell-off last year from which we have not fully recovered. It is also due to the continued remarkable growth in earnings, as much as 19% on average this quarter. 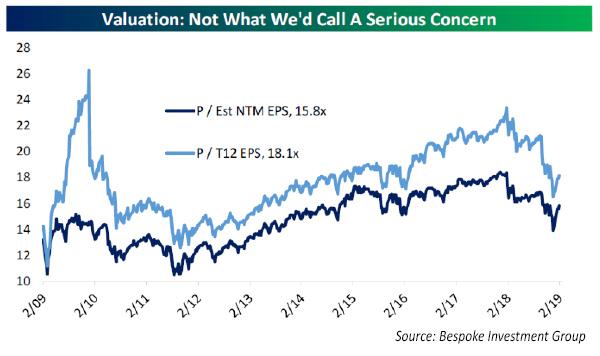 Invest With An Edge
655 Followers
Invest With An Edge (http://investwithanedge.com) is a free trading resource for everyday investors. Published by All Star Investor (http://www.allstarinvestor.com/), we’ve been delivering solid investing advice since 1991. We specialize in Exchange Traded Funds (ETFs), Mutual Funds, and Stock investing. This website includes: --Daily Market Commentary (http://investwithanedge.com/commentary) We cover the markets from a unique perspective. Our daily insight will help you to think about investing in a not-so-common way and will help you gain an edge in the markets. --Leadership Strategy Trading Method (http://investwithanedge.com/leadership-strategy) This growth strategy takes all investing styles (Large Cap Growth, Small Cap Value, etc.) and helps you to invest in the ones displaying true market leadership. --Weekly Investing Newsletter (http://investwithanedge.com/invest-with-an-edge-newsletter) We provide a powerful mid-week review of the markets with a focus on sectors, styles, and international positions. We also include a timely Pick of the Week for investors looking for more ideas.
Follow
To ensure this doesn’t happen in the future, please enable Javascript and cookies in your browser.
Is this happening to you frequently? Please report it on our feedback forum.
If you have an ad-blocker enabled you may be blocked from proceeding. Please disable your ad-blocker and refresh.