Weatherford is trying to move past its pitfalls

Weatherford International (WFT) provides equipment and services to onshore and offshore energy producers in almost 80 countries around the world. The main driver for Weatherford is its twin strategic goal of achieving $1 billion of EBITDA improvement and $1 billion of proceeds from asset sales. The targets, if achieved within its stated time frame, can alter WFT’s outlook. The recent downturn in the crude oil price and a negative outlook due to the low E&P spending have led to a significant goodwill impairment charge. This resulted in negative shareholders’ equity in FY2018.

I think the current energy headwinds will continue to keep WFT’s top line under pressure, while its bottom line will start to reflect the positive effects of transformation benefits. Over the long-term, Weatherford can and become healthier than what it was a year ago. But before a clearer picture emerges, it’s better to stay out of WFT. In the past year, Weatherford International’s stock price has gone down by 74% and underperformed the VanEck Vectors Oil Services ETF (OIH) which declined by nearly 35% during this period. OIH represents the oilfield equipment & services (or OFS) industry.

What are WFT’s primary challenges? 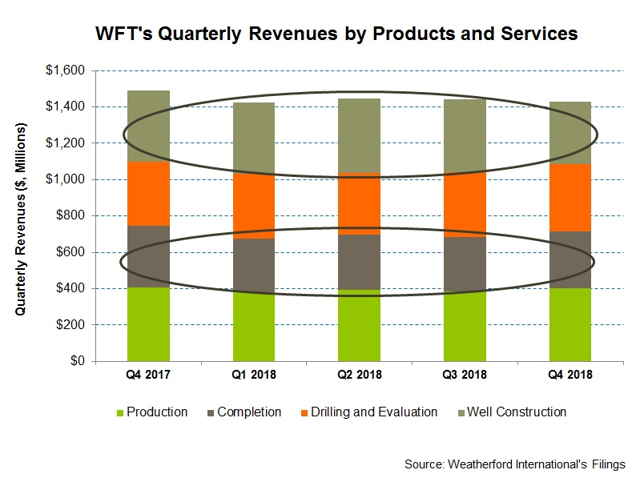 Going forward, here are the two most difficult problems in WFT’s growth path. One, the uncertainty around the upstream customers’ E&P capex budget. Since oilfield services companies’ revenues are margins are critically dependent upstream companies’ capex investment, the current crude oil price volatility is likely to keep the upstream budget flat-to-lower compared to 2018. A fall in investment when OFS supply is abundant in the market can adversely affect prices, thus reducing the OFS top line and bottom line at the operating level. Two, the completion activity slowdown and pipeline takeaway capacity bottleneck in the key shales, including the Permian Basin.

Here is what the market indicators have exhibited during Q4 2018. From September-end until December in 2018, the average rig count in the U.S. increased marginally (~4% up), while the West Texas Intermediate (or WTI) crude oil price was down by 38%. The number of drilled wells in the key U.S. unconventional shales was down by 1.5%, while the drilled but uncompleted wells (or DUC) in the EIA-designated key shales went up by 8.5%. Not only the completion activity has slowed down in the past quarter, but the overall drilling activity has also started to reflect the downside risks in the energy market environment. This can affect hydraulic fracturing activity and reduce demand for pressure pumping services.

So how does WFT plan to mitigate the risks? Well, WFT has a diversified product line as well as a geographically spread asset base. WFT is involved in the entire spectrum of E&P servicing, including Drilling and Evaluation, Well Construction, Production, and Completion. Its revenue-base distribution is balanced among these functions. From Q3 to Q4, the well construction business did decline (14% down) due to the adverse industry trend. But most of its other activities were resilient, with the highest growth coming from production-related activities (5% up) during the same period. The additional risk mitigation can come from WFT’s earlier decision to exit the U.S. pressure pumping and the international land drilling operation, which would protect its margin from a downfall. Since the end of FY2017, WFT has recorded ~$1 billion from these strategic sales. Since July 2018, WFT has been selling its land drilling rig operations in Algeria, Kuwait, and Saudi Arabia as well as two idle land rigs in Iraq. In October, WFT sold its laboratory services business. It has also signed an agreement to divest the surface data logging business. WFT plans to use the cash proceeds from the divestitures for working capital improvement or repaying debt. WFT’s leverage is excessively high, as I will discuss later in this article. 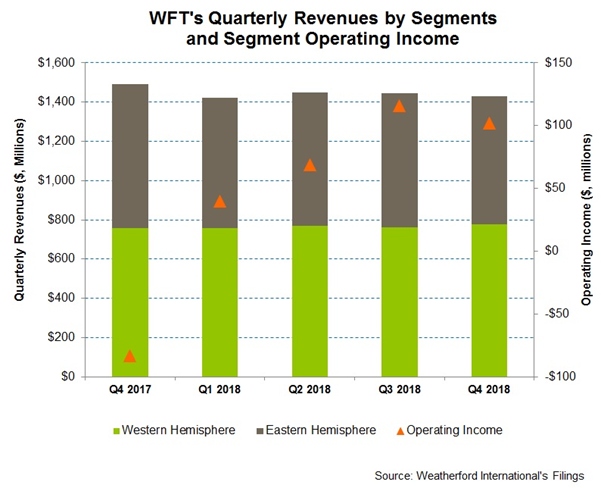 From Q3 to Q4, WFT’s revenues from the Eastern Hemisphere declined by 4%, while revenues from the Western Hemisphere increased marginally (2% up). The Western Hemisphere benefited from the increase in integrated services projects in Latin America, higher U.S. drilling and evaluation activities, and increased product sales in production-related works. However, price differentials between Canada and the U.S. affected WFT’s results adversely. Investors may note that Western Canada Select (or WCS), which tracks heavy oil from Canada, typically trades at a discount relative to WTI. The lower price reflects quality issues, as well as the cost of transport from Alberta to refineries in the U.S.

In FY2018, WFT’s operating loss was more than $2 billion due primarily to goodwill impairment. This resulted from a sharp decline in WFT’s stock price. During the fourth quarter, WFT’s stock price crashed by 79%, which significantly underperformed the 44% fall in the OIH price. WFT’s stock price fall reflects the steep decline in the crude oil prices and expectations for lower E&P capital spending. Subsequent to the charge, WFT’s goodwill balance reduced by about two thirds from prior levels. Despite the improvement in segment-level operating income in FY2018 compared to FY2017, WFT’s net loss was $2.8 billion in FY2018. 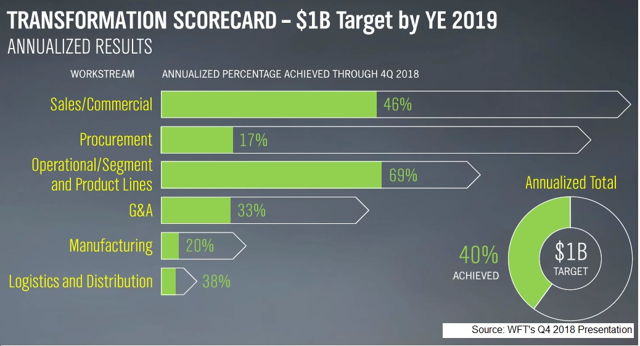 Beginning in early 2018, WFT initiated a cost reduction initiative which includes the workforce reduction, facility consolidations, organization restructuring, and other cost reduction measures. The objective of the program was to optimize WFT’s operations to reflect the energy price weakness and improve operating profit. The transformation goal was to reach a $1 billion incremental EBITDA run rate by the end of 2019. In Q4, WFT focused on procurement, manufacturing, and logistics and distribution functions. The rate of transformation accelerated in Q4, and as a result of its continued focus, WFT reached 40% of its target of increasing EBITDA by the end of 2018. WFT believes that it can achieve its goal by the end of 2019.

WFT plans to reach ~30% of the EBITDA improvement target by revamping its marketing and priority account management efforts. The next significant improvement should come from improving procurement sourcing and reducing the number of suppliers. This can result in 28% of the savings. Re-organization of the business structure and product line rationalization should also yield EBITDA benefit (21% of the target).

Technologies and products that can drive WFT in 2019

Weatherford can benefit from the higher demand for artificial lift services in 2019. WFT’s Rotaflex long-stroke system is perceived to be a better fit for old shales with high decline rates. According to WFT’s management, an operator in Argentina may apply this technology for an unconventional application in the Vaca Muerta shale.

Weatherford has recently announced an alliance with Valiant for ESP (electric submersible pump) offerings. This is a horizontal pumping system that adds uptime and efficiency to fluid transfer operations. During Q4 2018, WFT received an award for the HPS project in Iraq.

The other application that can drive WFT’s growth would be the Magnus rotary steerable system – a directional drilling technology. WFT has allocated a significant portion of its capex budget to develop and deploy this system. Apart from Magnus, WFT’s RFID-enabled TR1P single-trip completions system and the Vero automated tubular running system can also gain market share in the international markets.

In Q1, WFT’s management expects revenues to decline by a mid-single digit compared to Q4 2018 due to the lower upstream activity in Q1 and the loss of revenues following the divestiture of the international onshore drilling rigs. While the depressed crude oil price is likely to stifle upstream operators’ sentiment, additional delivery of products in Q1 that were deferred in Q4 2018 can mitigate the negative impact partially. In the Eastern Hemisphere, Russia and the North Sea in Europe can fall further compared to Q4. In aggregate, WFT’s international revenues are unlikely to decline in Q1. Despite that, in the Eastern Hemisphere, WFT’s adjusted EBITDA is forecast to be relatively flat sequentially from the positive impact of increased EBITDA coming from the transformation effect.

As of December 31, 2018, Weatherford shareholders’ deficiency was $3.66 billion, which was steep deterioration compared to $1.5 billion shareholders’ deficiency in FY2017. This resulted from the $2 billion impairment charge as I discussed before in this article. WFT has a high debt level (~$8 billion as of December 31, 2018). WFT’s liquidity as of December 31, 2018, was $900 million. WFT’s management has been trying to reduce debt by selling assets. The company is also trying to improve its indebtedness (debt-to-EBITDA) by significantly bolstering its EBITDA with various cost reduction programs. However, the success of these efforts is linked to the improvement in the energy market environment, or more specifically, the crude oil price, which can be volatile. With huge negative shareholders’ equity balance, WFT’s balance sheet can be potentially vulnerable to financial risks and credit risks.

What does WFT’s relative valuation say? 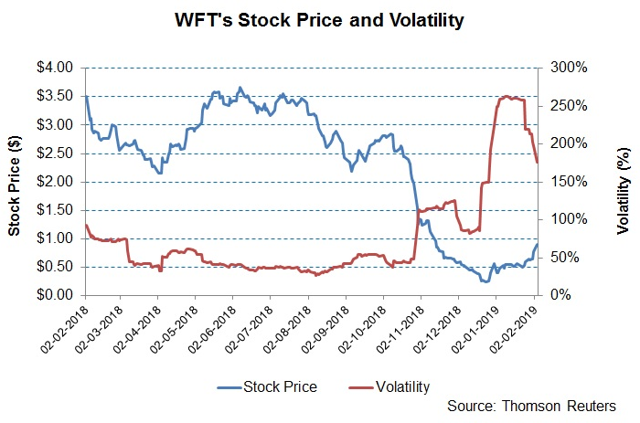 Weatherford International is currently trading at $0.91 (NYSE: WFT). Its stock price can fluctuate widely in price in response to various economic and non-economic factors. Its stock price volatility has increased significantly since November 2018. Its one-month volatility has increased from ~48%-level in late October 2018 to 176% as of January 4. This makes investing in this stock risky.

What’s the take on WFT?

The completion activity headwind led by the depressed crude oil price and weak new well construction services is affecting WFT’s top line. However, the surge in the U.S. energy production has kept WFT’s production-related services resilient, mitigating some of the negative impacts in recent times. The primary driver for Weatherford is its twin strategic goal of achieving $1 billion of EBITDA improvement and $1 billion of proceeds from asset sales. While it has completed most of its divestiture target, ~60% of the incremental EBITDA benefit is yet to be achieved. As a result of these initiatives, WFT’s operating income at the segment-level improved significantly in FY2018 compared to the previous year. The target, if achieved within its stated time frame, can alter WFT’s outlook. This is particularly important given WFT’s excessively high leverage and negative shareholders’ equity. The recent downturn in the crude oil price and a negative outlook due to the low E&P spending have led to WFT’s stock price going sharply south. This led to a significant goodwill impairment charge.

I think the current energy headwinds will continue to keep WFT’s top line under pressure, while its bottom line will start to reflect the positive effects of transformation benefits. The company has done well so far to avoid bankruptcy proceedings despite a highly leveraged balance sheet and low operating profit. WFT’s stock price has already hit rock bottom. I think the company, over the long-term, can turn around to take a much better shape than where it was a year ago. But before a clearer picture emerges, it’s better to stay out of WFT.