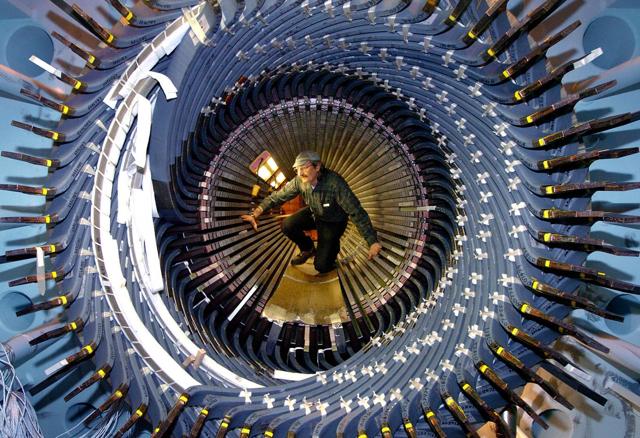 GE: Undervalued By About $68 Billion

General Electric (NYSE:GE) has endured a couple of very difficult years. In fact, since 2017 began, GE declined by a staggering 78%, before the stock finally bottomed last December. Numerous factors, like a substantial slowdown in its key power business, an earnings recession, financial woes from its capital segment, dividend cuts, dismissal from the Dow, and even possible bankruptcy whispers, were amongst the various factors behind the epic fall of one of America's greatest companies. 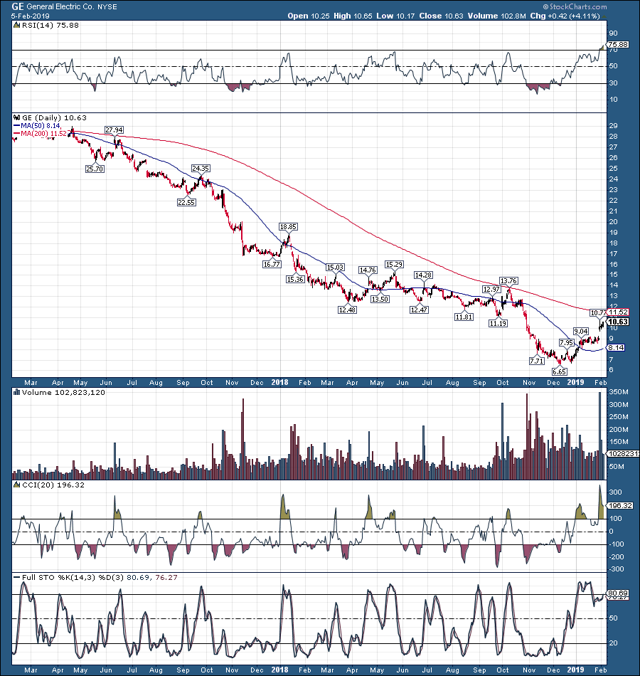 Abysmal sentiment, forced selling, and panic brought GE's stock down to absurdly low levels, and despite the company's recent bounce back, GE remains underappreciated and undervalued and its stock underpriced.

The stock price continues to reflect significant risk, despite GE's improving financial position. Furthermore, the company's depressed valuation suggests investors are too focused on past and near-term earnings results and are not focusing enough on the potential value of GE's businesses.

A breakup valuation of GE's parts suggests the company's current market cap may be discounted by about $68 billion, which implies the stock price could appreciate by about 77% to make up this difference. Additionally, numerous fundamental, technical, and psychological factors suggest the worst is behind GE, the company's position is likely going to continue to improve, and its stock price should continue to trend higher throughout 2019.

As far as the actual numbers, GE beat consensus estimate revenues by nearly $700 million, reporting $33.28 billion vs. estimates for $32.6 billion, although adjusted EPS came in at 17 cents, slightly below estimates.

Wow, create value, there is something we have not heard in the same sentence with GE in a long time.

If Anyone Can Do it, Larry Culp Can

Larry Culp is a very capable and well-respected CEO. He did a remarkable job turning Danaher around, essentially quintupling the company's market cap while serving as CEO, and it appears he may have a similar plan for GE. Perhaps Culp's best attribute is that he is not a GE insider, because if anyone can reform the company's notorious culture, it is going to be someone from outside the company. 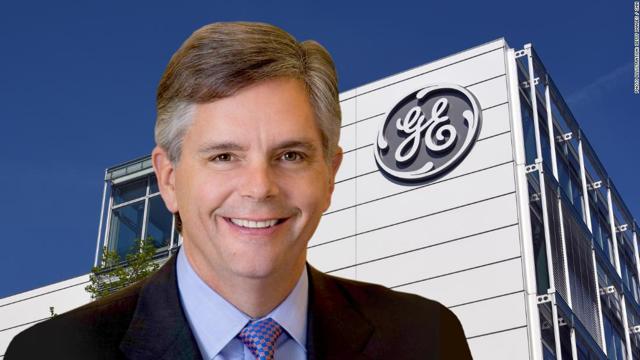 Larry Culp seems to have a clear strategy in mind, as he plans to unbuckle more segments, which should strengthen the company's balance sheet and substantially improve core operations. In addition to GE's recent spinoff of its Transportation segment, Culp plans to spin off GE's Oil and Gas interests, as well as GE Healthcare assets.

So, What is GE Really Worth?

This is a question that has been plaguing market participants for years. But, as GE improves its balance sheet and increases transparency, the valuation picture becomes clearer. Aviation continues to perform extremely well, with $8.5 billion in revenues just in the fourth quarter. The unit also grew quarterly revenues at 21% YoY and showed a profit of $1.7 billion in the fourth quarter, a 24% YoY increase. Aviation also showed a very healthy 20.4% profit margin.

It is important to note that GE's Aviation segment, with its growing revenues and extremely high profit margin is estimated to be worth $100 billion alone (or more even according to various sources).

GE's current depressed market valuation equates to a market cap of just $88 billion. Therefore, assuming the Healthcare and GE's Oil and Gas spinoffs cancel out a lot of GE's debt, which they should (in prior analyses, I've estimated their likely combined worth to be around $75-100 billion vs. $90 billion in GE's current debt minus cash), GE will be left with very little or essentially no debt, and multiple units like Power, Lighting, Capital, and Renewable Energy essentially valued at zero according to today's market value.

This implies GE's market cap and its stock price are likely to rise once the market begins adequately revaluing and repricing GE relative to the worth of its businesses. Hence, the question is by how much is GE undervalued right now.

According to recent and prior financial results, Aviation is conservatively worth about $100 billion, Renewable Energy could be valued at around $15 billion, Power is likely worth roughly $30 billion, Lighting is worth about $1 billion, and Capital is likely worth something. Although GE Capital is difficult to value, some sources value Capital at $15-20 billion, based on a 1-1.5 X book valuation. But, for the sake of staying conservative, we can value Capital at just $10 billion.

Thus, based on the approximate value of GE's remaining segments, the company's market value should be about $156 billion.

This implies GE's market cap and its stock price would need to appreciate by approximately 77% ($88 billion to $156 billion) from current levels to better reflect this more realistic valuation of GE's businesses.

We can see that GE's technical image has improved drastically. After the final leg lower late last year, GE became severely oversold, during which time GE hit its lowest price point since the early 1990s, even eclipsing the low achieved in the financial crisis of 2008. 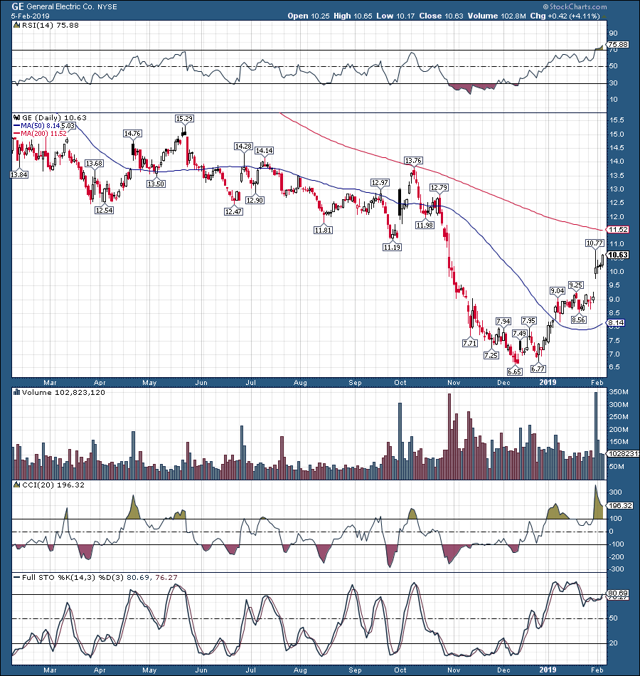 Shortly following this extreme low, GE retested the low below $7, made a distinct double bottom, and then went on to build out a crisp cup and handle technical pattern. Then, the stock flagged upward on GE's latest earnings and is now going through a consolidation phase, which will likely lead to another flag higher going forward.

Ultimately, the stock is likely headed to the $12.50-13 level, where it can build out a larger cup and handle pattern, before proceeding higher once again.

Watch for Sentiment to Continue to Flip

The enormous amount of negative news flow that bombarded the stock over the past two years created one of the most toxic sentiment environments I have ever seen in any company. This extremely damaging environment caused GE's shares to become incredibly oversold.

However, as the news continues to shift to a more positive tone, going forward, sentiment should continue to improve, which should be extremely favorable to GE's stock price. The perpetually improving sentiment should enable market participants to realize that GE has significant earnings potential, and its businesses are far more valuable than the company's current depressed market valuation suggests.

Bottom Line: Why I'm Not Selling a Single Share

I initiated a partial GE position last year in the $12-13 area. However, I then tripled my position at around the $7 level, as I outlined in this article here. This brought my overall cost basis down to about $8.75 per share. So, now my entire GE position is up by about 23%, and I am not about to sell a single share.

I view GE as a long-term turnaround position, and I believe the company has significantly more value than what the market is giving it credit for right now. Once GE spins off Healthcare and Oil and Gas, the proceeds should go to pay down or largely eliminate debt. The remaining GE units are worth roughly $156 billion, which is about $68 billion above GE's current market value.

Furthermore, the valuation of GE's businesses is based on recent, relatively depressed financial results. For instance, once Power recovers and its earnings power returns, the unit will likely be valued at much more than just $30 billion, and its contribution to overall EPS will also rise.

Nevertheless, despite these relatively conservative valuations, GE's market cap appears to be undervalued by about $68 billion. This implies the company's stock price has roughly 77% upside potential in the short to intermediate term.

A 77% gain from current levels represents a price target of about $19, and this is where the stock may be headed, possibly by the end of this year. Therefore, I am keeping an outperform rating on GE, with a 2020 price target of $20-22.

Disclaimer: This article expresses solely my opinions, is produced for informational purposes only and is not a recommendation to buy or sell any securities. Investing comes with risk to loss of principal. Please consider consulting a professional before putting any capital at risk.

Hi, I'm Victor! It all goes back to looking at stock quotes in the old Wall St. Journal when I was a kid. What do these numbers mean, I thought? Fortunately, my uncle was a successful commodities trader on the NYMEX, and I got him to teach me how to invest. I bought my first actual stock in a company when I was 20, and the rest, as they say, is history. Over the years, some of my top investments include Apple, Tesla, Amazon, Netflix, Facebook, Google, Microsoft, Nike, JPMorgan, Bitcoin, and others.