Tesla (NASDAQ:TSLA) is an anomaly among automakers, enjoying an astonishing valuation premium compared to industry peers. As we discussed in a recent research note, this premium is largely the product of the market’s expectation of huge growth over the next few years. But this huge market capitalization is the product of more than auto segment growth segments. It's also based on the notion that Tesla is “more than a car company.”

One of the chief elements that Tesla boosters point to when making the case that it's far more than a conventional automaker is its solar energy business. They argue that Tesla is an integrated energy company that will be providing not just the next generation of transportation technology, but also the energy generation systems that will power the homes and businesses of the future.

However, there's one big problem with this rosy picture of Tesla’s solar business: It appears to be in the process of winding down. Once the death knell finally sounds for Tesla Solar, the company will have one less narrative to spin as a justification for its grossly inflated share price.

Investors should be ready for the Tesla Solar wind-down to contribute to downward pressure on Tesla’s rarefied stock price in 2019 - and beyond.

Tesla’s solar energy business is largely the product of the acquisition of SolarCity, a company founded and led by Tesla CEO Elon Musk’s cousin and in which Musk himself was personally invested. In 2016, when SolarCity was facing increasing financial pressure, Musk made a bid to save it by merging it with Tesla.

Musk made his case for the merger to analysts during a conference call in the run-up to the merger vote:

"And it just became increasingly obvious that as we’re developing the Powerwall... Particularly as we integrate more of the inverter electronics and intelligence in the Powerwall, you really need to take the solar panels and the solar system into account when doing that...I think the word synergy, it’s like almost sort of dirty word but I think these synergies are really just common sense, like obviously it’s more efficient to do this as an integrated system at the sale and at the installation and in terms of just general maintenance and managing customer relationships. And I think that makes it kind of a pretty obvious thing to do."

Musk continued his aggressive campaign in favor of the merger in the following months, culminating in the now infamous unveiling of the Solar Roof product. 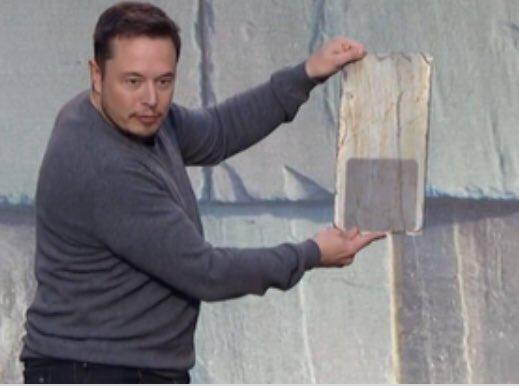 In a live presentation to shareholders, Musk unveiled the Solar Roof shingles, stating that the product was essentially ready for deployment. Tesla also claimed it would be cheaper than an ordinary roof:

"Solar roof is more affordable than conventional roofs because in most cases, it ultimately pays for itself by reducing or eliminating a home's electricity bill.”

When Musk unveiled the Solar Roof in October 2016, it was supposedly a viable product on the cusp of mass production. The presentation sparked a rash of preorders, as well as extensive fawning media coverage in early 2017 as everyone waited with baited breath for the arrival of the solar roof. Two years later, the Solar Roof has proven to be little more than fantasy. Indeed, through Q2 2018, only two installations had been confirmed. A handful more have been reported since, but the product is obviously still far from mass production.

But shareholders did not know that the design was so far from completion when they voted overwhelmingly in favor of the SolarCity acquisition. Thus, SolarCity was absorbed into Tesla in a $2.6 billion all-stock transaction. Additionally, Tesla took on the foundering solar energy company’s punishing $2.9 billion debt load.

While Musk sold the SolarCity acquisition as strategically smart, it quickly proved to be a serious lodestone. The $2.6 billion debt burden alone was nearly ruinous for a company that already was running significant losses in the highly capital-intensive auto manufacturing industry.

More than a capital drain, SolarCity has proven to be something of an albatross. The Solar Roof is still stuck in development. There was virtually no mention of the product in the recently released Q4 2018 earnings report, but the previous quarter’s report had this to say:

“Due to the complexity of Solar Roof, we continue to iterate on the design of the product via intensive reliability testing, and we also continue to refine the installation process. Accordingly, we expect to ramp production more quickly during the first half of 2019.”

Tesla’s latest claim is that it will be “ramping” production and sale of the Solar Roof in the first half of this year. Yet, more than a month into 2019, there's no sign of life from the moribund product.

Things look even worse when one considers the mass layoffs at Tesla last summer, which included the closure of numerous SolarCity installation facilities and the firing of many of its workers.

Signs of further distress have been readily apparent. Tesla’s reported cash flow from solar leasing has cratered, while solar installations have stagnated far below their 2016 peak. 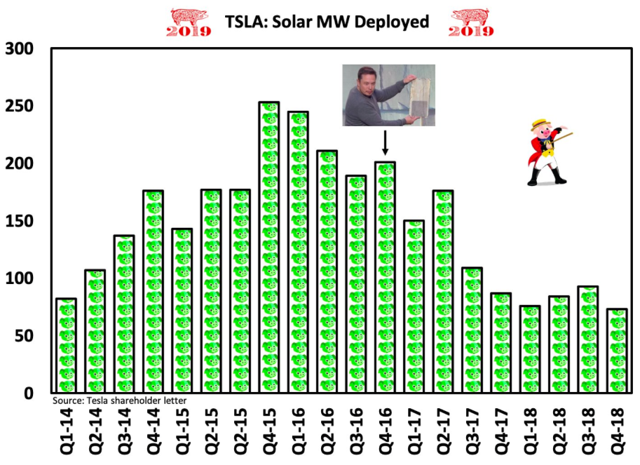 As the Buffalo News reported last month, Tesla’s solar business was being put on life support, with the Solar Roof facing further delays. The report highlighted the five-year low of solar installations in Q4 2018, and that the wind down was not over:

“Tesla doesn't expect the decline to stop, either. The company said solar deployments would drop even further during the first quarter to another post-2012 low.”

It's crystal clear at this stage that Tesla’s residential solar business has been tapering off. It's a highly competitive business and residential solar panels are becoming increasingly commoditized. In such an environment, the prospect of a revived Tesla Solar look bleak.

While Tesla’s residential solar business seems to be slowly dying off, the story is far from over. While Tesla seems to want to wind down its solar operations, there are numerous impediments to it doing so. Chief among them is Gigafactory 2, the company’s factory in Buffalo, New York, dedicated principally to solar and battery production. 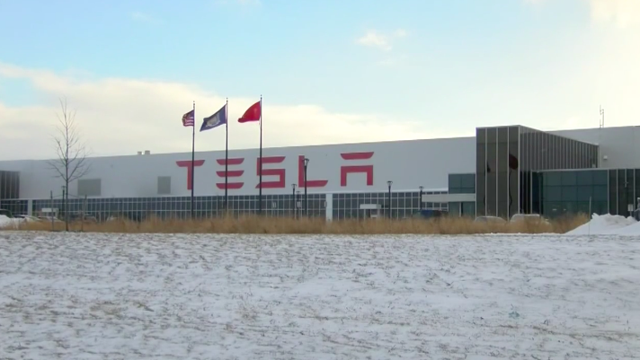 Sometimes it feels as if Tesla and Musk have forgotten about their Buffalo plant entirely other than remembering to call the putative Shanghai factory by the title Gigafactory 3. But it's a problem that cannot be ignored. Indeed, Gigafactory 2, which was meant to become a solar panel production powerhouse in short order, has languished, despite the rich grants from the state of New York that financed its construction. Taxpayers coughed up a whopping $750 million to build the Buffalo facility, which was to be the centerpiece of Governor Andrew Cuomo’s Buffalo Billion Initiative.

In exchange for taxpayer cash, Tesla was supposed to employ 1,460 workers by April 2020. Each year it fails to meet this employment obligation, Tesla will be slammed with a $41.2 million fine, as the terms of the arrangement make quite plain:

At the end of 2018, Tesla reported 800 people working at the plant, evenly split between Tesla itself and its partner at Gigafactory 2, Panasonic (OTCPK:PCRFY). However, according to a Feb. 4 report by WIVB 4 News, a local news station, numerous former Buffalo plant workers dispute this figure. According to one source, the reported employee headcount is inconceivable in light of observed shift sizes:

“If you took all of our shifts, there are about 50 people, maybe 60 people at best per shift, there are four shifts...You do the math. Are you going to tell me there are 200 people up in the front office?”

WIVB followed up with another story on Feb. 6, reporting that State Senator Tim Kennedy, who represents the Buffalo district, was actively investigating the situation. Upon querying state development authorities, Kennedy was assured that the headcount at Gigafactory 2 was indeed 800. However, Tesla did not offer the written answers to Kennedy’s questions related to employment and investment. Kennedy expressed his frustration with Tesla’s caginess quite openly, and stated that he was “infuriated” by the company’s decision to fire 50 workers from the facility during a recent staff cutback.

The story of Tesla’s deteriorating solar business is important for two reasons. The first is very concrete. Specifically, Tesla will face harsh financial penalties if it fails to meet its employment requirements at Gigafactory 2. It has barely more than a year to double the headcount in Buffalo before it starts having to pay $41.2 million every year. The threat of further actions, such as financial clawbacks by the state government, adds to the uncertainty as well as scale of potential cost. For a company struggling to be profitable, such penalties could easily prove seriously troublesome.

The second reason the collapse of Tesla’s solar business matters concerns the company’s all-important narrative. Tesla is supposed to be “more than a car company” thanks to its battery and solar energy production. Residential solar installation was meant to be a crucial component of the integrated next-generation energy business, as well as contributing meaningfully to Tesla’s bottom line. Instead, the segment appears moribund. Without the solar business, Tesla has precious little on which to base the claim that it's anything other than a car company. If the market starts to treat Tesla like it does other automakers (even accounting for a slightly higher multiple in light of organic growth), we can expect the stock price to fall precipitously.

This is the bottom line: Tesla’s solar energy business has proven largely to be a failure and appears to be in the process of being wound down to a degree. While Tesla continues to talk up the future of the segment, the reality is increasingly obvious. It may take the market some time to process the significance of this story, but, when it does, expect the share price to have an unpleasant reckoning.

250 Comments
To ensure this doesn’t happen in the future, please enable Javascript and cookies in your browser.
Is this happening to you frequently? Please report it on our feedback forum.
If you have an ad-blocker enabled you may be blocked from proceeding. Please disable your ad-blocker and refresh.