Over the past few months, most of you have noticed our increased activity in closed-end funds as the inflow of volatility finally shook them up and created various arbitrage, and directional, opportunities for active traders like us.

Now that these products have grabbed our attention, we are continuously monitoring most funds by sector and will reinstate our Weekly Review, publishing a recap of the groups of interest.

No doubt the most interesting event which all of the market participants expected was the meeting of the Federal Reserve and their decision about the interest rates. So, on Wednesday the Central Bank of the United States held its policy rate in a range between 2.25 percent and 2.5 percent and pledged that future moves will be done patiently. The statements also included the fact that the economic conditions will be one of the determining factors for future decisions. All of the above information is important for the municipal bond closed-end funds and for the rest of the assets which have relatively high duration. However, the outcome of the event may be can be considered as positive for the Munis. 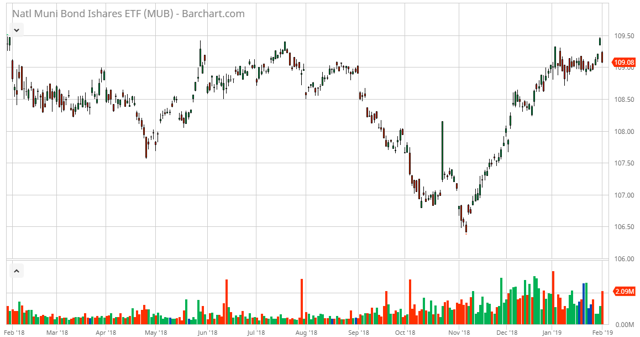 Over the past week, the iShares National AMT-Free Muni Bond ETF (NYSEARCA:MUB) continued its positive performance. The price of the main index reported a gain of $0.10 and finished the week at $109.08 per share. Additionally, it is important to mention the regular monthly dividend which was distributed. On Friday, the benchmark distributed $0.234 per share. Еven after the deduction of the dividend the index remained in green territory for the week.

As you know, we follow the performance of the U.S. Treasury bonds - considering them a risk-free product - with maturities greater than 20 years: the iShares 20+ Year Treasury Bond ETF (TLT). The reason for that is the strong correlation between these major indices, and the chart below proves it. Additionally, a statistical comparison is provided by our database software: 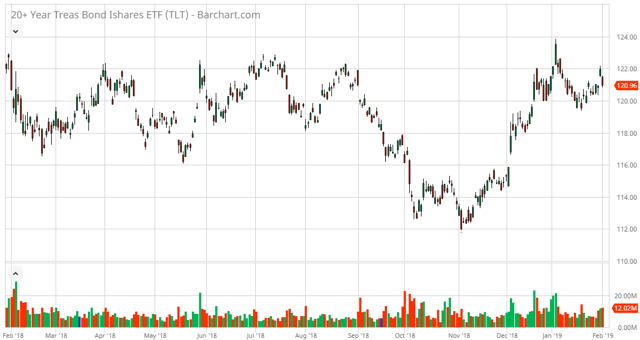 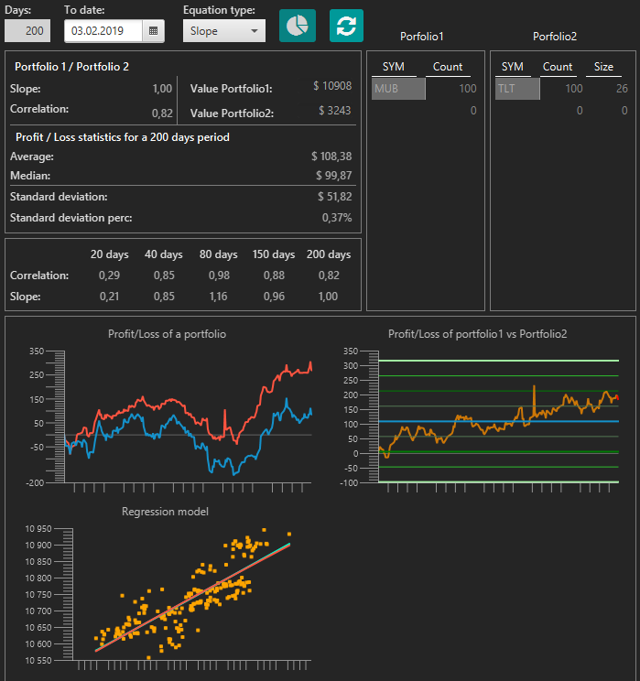 Comparison Of The Yields And Municipal/Treasury Spread Ratio

Investing in municipal bonds is popular because they have the potential to offer higher yields than similar taxable bonds. If an investor wants to know whether muni bonds are cheap in comparison to taxable bonds or Treasuries, they could find out by comparing them. However, this method does have its limitations, and the investor should perform a more thorough analysis before making a decision: 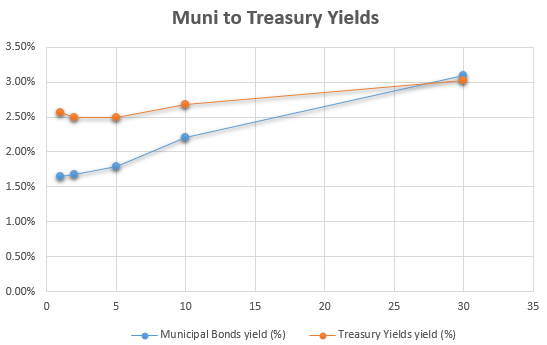 The Municipal/Treasury spread ratio, or M/T ratio as it is more commonly known, is a comparison of the current yield of municipal bonds to U.S. Treasuries. It aims to ascertain whether or not municipal bonds are an attractive buy in comparison. Essentially, an M/T ratio north of 1 means that investors receive the tax benefit of muni bonds for free, making them even more attractive for high net worth investors with higher tax rate considerations. 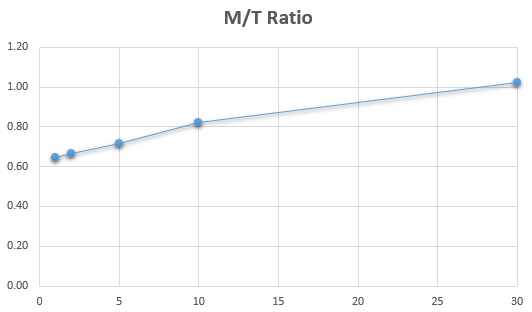 The narrowing spread and 3-month LIBOR are important for the leveraged municipal funds, and they can be highly affected by them. The 3-month LIBOR rate is a commonly used funding benchmark for the municipal bond CEFs.

Source: YCharts.com, 10-2 Year Treasury Yield Spread and 3-Month LIBOR based on US Dollar 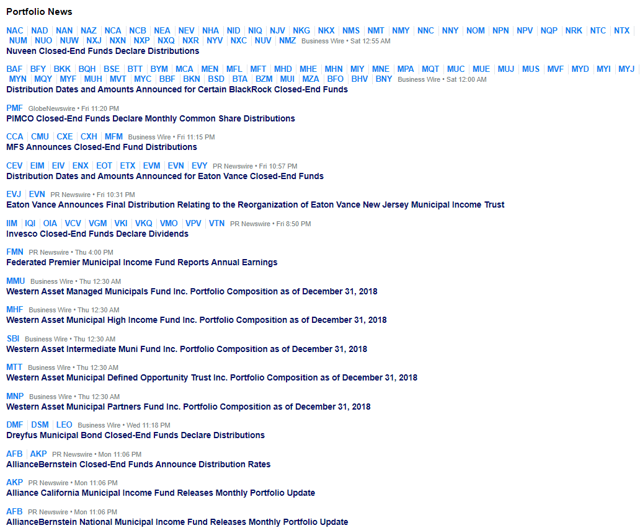 Many funds from the sector announced their regular dividends. Among these were the Munis sponsored by: 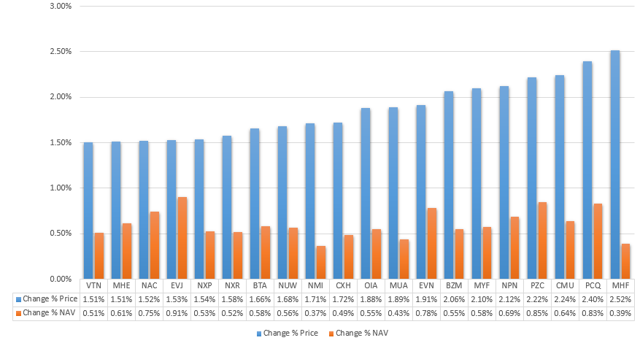 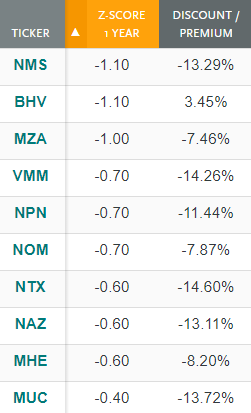 When I am sorting the table by the lowest one-year Z-score, my aim is to find the most statistically undervalued CEFs from the sector. The Z-score is an appropriate indicator to see how many times the discount/premium deviates from its mean for a specific period.

Over the past several months, the funds increased significantly their prices and their Z-scores increased their values, as well. Currently, we have only three funds which have Z-score below -1.00 point. Also, you will notice that all the participants in the sample are state-specific Munis. In general, I could say that it's getting very difficult to find a statistical edge to support our desire to review some of the funds as potential "Long" candidate.

Based on the statistical approach, BlackRock MuniYield Arizona Fund (MZA) is one of the most undervalued funds from the sector. Almost all of the assets from the portfolio of MZA are from issuers located in Arizona. "Education" and "Utility" sector have the biggest weight in the portfolio and the main part of the investments is labeled as "AA" and "A" ratings. 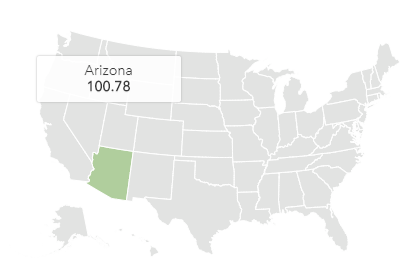 From the national Munis BlackRock Municipal Income Investment QualityTrust (BAF) is the one with the lowest Z-score. It is not part of the table because its statistical parameter is -0.10 point. I think it is worth to review it as a potential "Buy" candidate. Once again, we can not talk about a statistical edge but the discount of the fund is 9.78% and its current yield is 5.29%. The graph below compared the discount of BAF to its peers and gives a signal that BAF may be relatively undervalued at the moment. 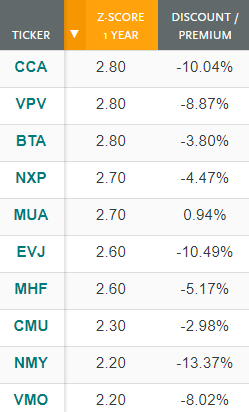 On the other hand, are the closed-end funds sorted by their highest Z-score. From a statistical point of view, they should be reviewed as potential "Sell" candidates. When I prepare my research for potential "Shorts" I want to see them traded at Z-score of at least 1.50 points and their price to be above or pretty close to their net asset value.

Last time the situation was almost the same and I suggested a pair trade which could be formed. The previous week, BlackRock Municipal Income Trust II (BLE) was traded at Z-score of 2.20 points. I recommended the idea to enter into a short position, but to hedge it with long positions in BlackRock Municipal Income Investment QualityTrust (BAF) and BlackRock MuniYield Fund (MYD). So, what happened on a weekly basis. The price of our short position fell by 0.71% and the prices of our long positions reported a total gain of 0.22%. In other words, the total profit of this pair trade is 0.93% on a weekly basis. Not so bad at all. Additionally, from my perspective, there is still a potential in this trade because their net asset values are strongly correlated but the price of BLE is still deviating.

This week, the situation with our chart leader BlackRock Long-Term Municipal Advantage Trust (BTA) is very identical and you can trade it with long positions in MYD and BBK. Currently, BTA has a Z-score of 2.80 points and discount of 3.80%. The yield of the fund is 5.21%. On the other hand, the Z-score of BBK is 1.00 point and its discount is 8.83%. On top of that BBK has a slightly higher current yield of 5.39%.

The average one-year Z-score in the sector is 0.93 points. Last time, the average Z-score of the municipal sector was 0.92 points. Currently, the average value of the statistical indicator remains positive and indicates for a time to close some of our long positions. 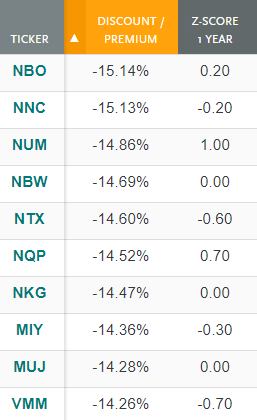 Neuberger Berman New York Intermediate Municipal Fund (NBO) is the fund with the biggest discount. It is interesting to notice that the spread between its discount and the discount of the rest of the New York Munis is relatively widened. A quick check of the investments will show us that "Higher Education" takes 24.50% of the portfolio. The fund has relatively low Option-Adjusted Duration of 8.7 years and 85% of its asset are rated with "Investment Grade" ratings. If you want to invest in New York, then NBO definitely deserves your attention. 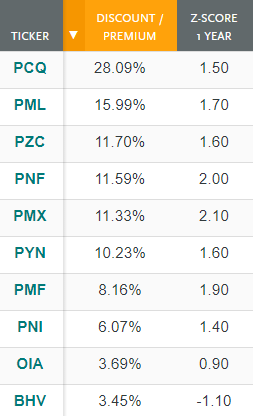 Probably, you noticed the dominance of the PIMCO funds. The market participants constantly pay a premium for them. If we do not have a strong logic behind our "Short" position, it can lead to unfavorable results. 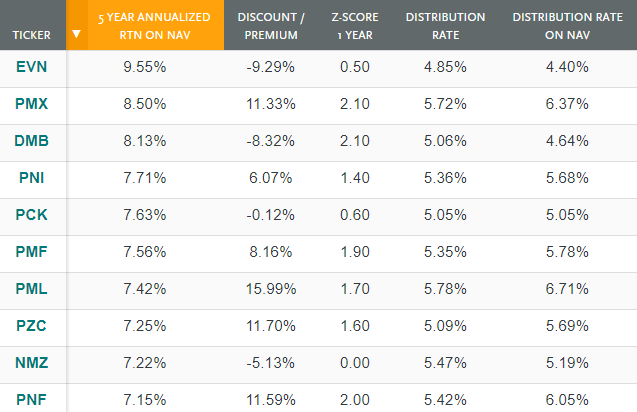 The above sample shows the funds with the highest return on net asset value for the past five years. The average return for the sector is 5.50%. Several funds from the above observation caught my attention: 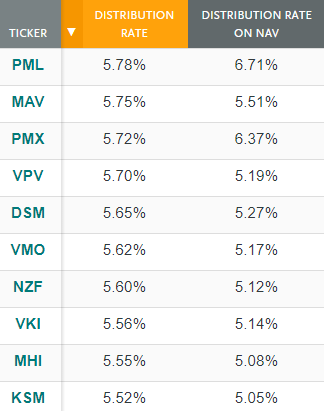 Below on the chart, I plotted the yields of funds from the sector with a discount of more than 8.00% and negative Z-score. 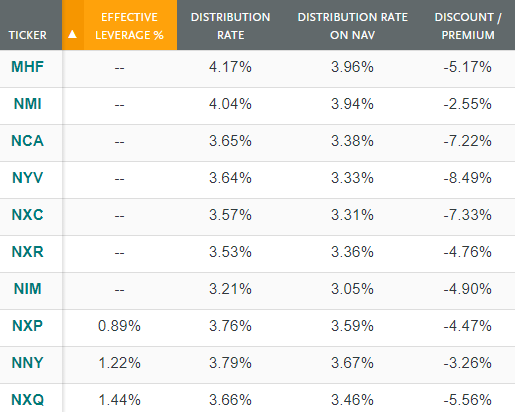 Below you can find the chart of the funds with the lowest effective leverage and their yields on price. If you are not a big fan of the high leverage, this chart will be very helpful.

The price of the iShares National Muni Bond ETF is still suffering from rising Treasury yields and future expectations. Definitely, the change of the interest rates will play a role, and we should anticipate a reflection on the Muni sector as well. Compared to the previous year, the discounts of the closed-end funds holding such products have significantly widened. While I find this to be fundamentally justified, I always expect some buying impulse to give us at least a mean-reversion trade in these products.

Note: This article was originally published on February 3, 2019, and some figures and charts may not be entirely up to date.

At Trade With Beta, we also pay close attention to closed-end funds and are always keeping an eye on them for directional and arbitrage opportunities created by market price deviations. As you can guess, timing is crucial in these kinds of trades; therefore, you are welcome to join us for early access and the discussions accompanying these kinds of trades

Day trader whose strategy is based on arbitrages in preferred stocks and closed-end funds. I have been trading the markets since I started my education in Finance. My professional trading career started right before the big financial crisis of 2008-2009 and I clearly understand what are the risks the average investor faces. Being a very competitive trader I have always worked hard on improving my research and knowledge. All my bets are heavily leveraged(up to 25 times) so there is very little room for mistakes. Through the years my approach has been constantly changing. I started as a pure day trader. Later I added pair trades. At the moment most of my profits come from leveraging my fixed income picks. I find myself somewhere in between a trader and an investor. I am always invested in the markets but constantly replace my normally valued constituents with undervalued ones. This approach is similar to rebalancing your portfolio and I just do this any time there is some better value in the markets. I separate my trading results from my trading/investment results. I target 40% ROE on my investment account and since inception in 2015, I am very close to this target.

My main activity is running a group of traders. Currently, I have around 40 traders on my team. We share our research and make sure not to miss anything. If there is something going on in the markets it is impossible not to participate somehow. Some of my traders are involved in writing the articles in SA. As such Ilia Iliev is writing all fixed-income IPO articles. This is part of their development as successful traders.

My thoughts about the market in general:

*If it is on the exchange it is overvalued and our job is to find the least overvalued.

*Never trust gurus - they are clueless.

*Work hard - this is the only way to convince yourself you deserve success.

*If you take the risk it is you who has to do the research.

*High yield is always too expensive.

We are running a service here on SA. It is a great community with very knowledgable people inside. Even though we are not in the spotlight as often as we would like to our articles' results are among the strongest on SA. You can always contact me to share some of our articles and best picks so far.

Disclosure: I/we have no positions in any stocks mentioned, but may initiate a long position in PCK over the next 72 hours. I wrote this article myself, and it expresses my own opinions. I am not receiving compensation for it (other than from Seeking Alpha). I have no business relationship with any company whose stock is mentioned in this article.