In yet another quarter, media giant Viacom (NASDAQ:VIAB) continues to show that its underlying business is far stronger than investors are giving it credit for. After moving past a painful 2018 - one in which theatrical results were slow and most investors were distracted over a battle against Les Moonves of CBS (CBS) - Viacom is kicking off 2019 with the promise of a strong recovery.

Despite have bounced back strongly so far in 2019, Viacom still remains a classic value stock. Shares trade at a measly 7x forward P/E ratio - and this is despite the fact that Viacom still managed to eke out a respectable 9% y/y growth in pro forma EPS in the first quarter.

In my view, the biggest reason to invest in Viacom is the strong content angle. For the past several years, distribution giants such as Netflix (NFLX) have been paying top dollar for strong original content. Viacom - with a library spanning MTV, BET, Comedy Central, Nickelodeon, and Paramount Pictures - has one of the deepest libraries in the media industry.

The highlights chart below, taken from Viacom’s Q1 earnings deck, showcases the company’s continued success in drawing large audiences and winning elevated ratings. Note in particular that Viacom has more top-10 cable shows than any other content producer in the industry: 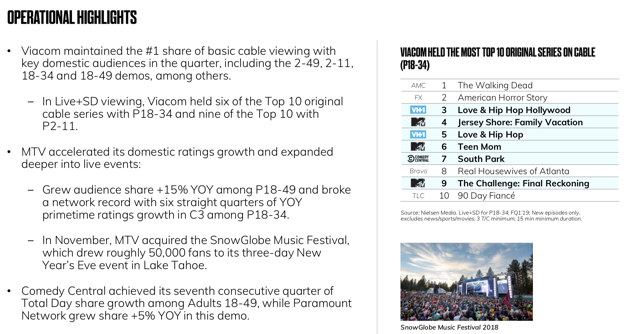 Distributors are taking notice. In Q1, Netflix purchased The Haunting of Hill House from Viacom - which turned out to be a huge hit among Netflix audiences. More titles are in the works. Bob Bakish, Viacom’s CEO, sees this line of business growing to become a billion-dollar segment within a few years, per his comments on the Q1 earnings call:

The fifth headline is our studio production business. Here, our expansion beyond Paramount Television is really starting to gain traction, and we’re well on our way to achieving our goal of making this $1 billion business in just a few years.

Then there’s also the company’s announced acquisition of Pluto TV. For $340 million, Viacom is gaining access to Pluto’s 12 million MAUs - giving Viacom an audience to monetize its “back library” of content. Viacom has long been dominant on the production side, but Pluto TV is a gateway toward Viacom becoming its own OTT provider and generating revenues from its massive, diverse content library.

In short - Viacom is both sitting on a heap of valuable content and has a track record for continuing to produce hit content. While the company is still slowly climbing out of a flat year, it’s attractively valued at a single-digit P/E ratio. Continue to stay long on this stock and hold on for the rebound. 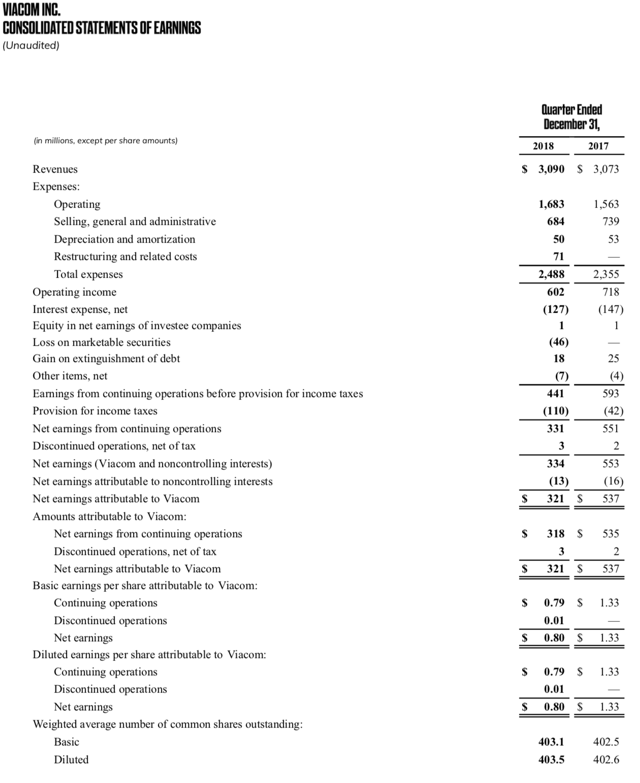 Revenues were essentially flat at $3.09 billion (+1%y/y), missing Wall Street’s revenue expectations of $3.12 billion (+2% y/y). It’s important to note, however, that foreign currency effects had a huge effect on this flat performance. FX provided three points of headwind to the quarter; in the absence of FX movements, Viacom would have reported 4% y/y growth in revenues. Breaking that down into Viacom’s segments reveals a few more points of strength.

First, note that Viacom managed to grow affiliate revenues by 4% y/y. Note that the affiliate business was a sore spot in 2018 - with the mass of cord-cutters, investors worried that Viacom’s media revenues could stay afloat. However, Viacom managed to drive revenue growth through successful contractual rate increases. Offsetting the growth in affiliate revenues was the fact that ad revenues fell, particularly overseas - but Wade Davis, Viacom's CFO, noted on the earnings call that "we're fairly confident in the return to growth in the second half of the year."

The film division, in addition, had a blockbuster quarter. Some of the highlight films in the quarter included the Transformers offshoot Bumblebee, which has grossed $450 million cumulatively to date. As a result of this and other successes, the Filmed Entertainment segment saw a strong 14% y/y jump in revenues, while U.S. theatrical revenues are up an enormous 36% y/y:

It's worth noting as well that Viacom has reiterated its deal with Netflix to produce original films as well as original series akin to The Haunting of Hill House. Having this additional huge distribution channel adds yet another opportunity for revenue acceleration in the film division. 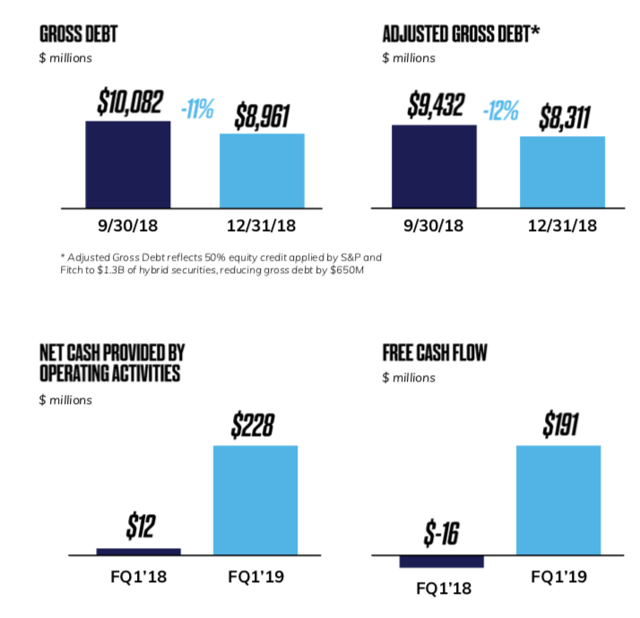 In my view, Viacom has never looked healthier. When we exclude the impacts of foreign exchange, all of Viacom's key businesses are slowly returning to positive year-over-year comps - especially the all-important film division, which has seen colossal blockbuster hits as well as ongoing deals to deliver films directly to OTT platforms including Netflix and the newly-acquired Pluto TV. At the same time, a keen eye on expenses has also allowed Viacom to boost profits and apply its free cash flow growth toward debt reduction.

When considering all of the growth initiatives Viacom has under its belt, it's unclear why the stock is trading at a single-digit P/E ratio - many of Viacom's media peers, as shown in the chart below, trade at substantially higher multiples:

Stay long on Viacom until its valuation normalizes closer to the level of its peers. In my view, Viacom's Class B shares are worth at least a 10x P/E ratio against FY19 EPS estimates of $4.27 (per Yahoo Finance) - implying a ~$43 year-end price target and 42% upside from current levels.

Gary Alexander
23.88K Followers
Author of Daily Tech Download
Curated research on high-performing tech; winning trades closed monthly
With combined experience of covering technology companies on Wall Street and working in Silicon Valley, and serving as an outside adviser to several seed-round startups, Gary Alexander has exposure to many of the themes shaping the industry today. He has been a regular contributor on Seeking Alpha since 2017. He has been quoted in many web publications and his articles are syndicated to company pages in popular trading apps like Robinhood.
Follow

Disclosure: I am/we are long VIAB. I wrote this article myself, and it expresses my own opinions. I am not receiving compensation for it (other than from Seeking Alpha). I have no business relationship with any company whose stock is mentioned in this article.