Last month, we wrote that winter was apparently "just heating up" for the Global Precious Monthly Metals Index (MMI).

Turns out we were right. 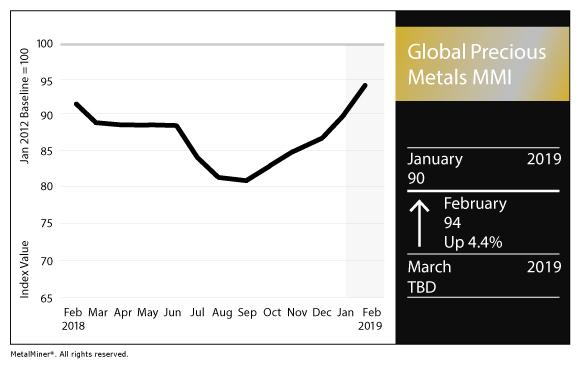 The subindex tracking a basket of gold, silver, platinum and palladium prices from four different geographies shot up four points to hit 94 for the February reading - a 4.4% increase - driven by a scorching palladium price that began the month higher than the gold price (both above $1,300 per ounce).

But that wasn't the only driver.

The U.S. silver price, as tracked by our MetalMiner IndX, bumped above $16 per ounce, the first time it reached that level since July 2018.

Gold began the month sitting pretty at $1,320 per ounce. Meanwhile, the U.S. platinum price rebounded for the February reading after its January dip, ending up at $820 per ounce.

Let's take a moment to take that in: platinum at $820, while palladium broke the $1,300 barrier to start February at $1,325 per ounce. That represents the most massive platinum-palladium spread ($505 separating the two) in favor of palladium in the history of MetalMiner's Monthly Metals Index, which dates back to January 2012.

It's also the 16th straight month of palladium holding a premium over platinum.

A palladium price correction? Nowhere to be seen so far.

Reuters polled 29 analysts and traders just before the beginning of this month on the palladium and platinum outlook, and while the former's prices may stagnate in 2020, these next 11 months look to be the metal's best ever.

What is Driving PGM Prices?

The global palladium supply shortage is still the top driver, with a shortfall of more than 1 million ounces this year and next estimated by researchers Refinitiv GFMS, according to Reuters.

However - automotive metaphor alert - the driver that could stall the palladium price craze is a marked slowdown in major global car markets.

Automotive sales in China fell last year for the first time in three decades, and the U.S. and E.U. automotive markets are bracing for more potential slowdowns amid economic growth concerns.

Will that happen in 2019? Much remains to be seen.

For now, it seems that if buyers are buying on the spot market and could stand to somehow substitute platinum for palladium in their industrial applications, it wouldn't hurt to look into it.

The U.S. platinum price rebounded for the February reading after its January dip, rising 3.3% and ending up at $820 per ounce.

MetalMiner
2.49K Followers
MetalMiner currently ranks as the largest metals publication in the United States according to third party ranking sites. Geared toward industrial metal procurement professionals, MetalMiner has attracted a wide audience in the finance community as well as a global following. MetalMiner principals have appeared on FoxBusiness.com, MSNBC, NPR Marketplace, BBC Radio among others. The team has also received coverage in The Christian Science Monitor, Forbes, American Metal Market, American Iron and Steel Institute, Automotive Industry Action Guide, among many others. The team's principals have extensive global metals sourcing and trading experience having worked for consulting powerhouses Andersen and Deloitte Consulting and leading trading companies such as Stemcor and Glencore. Updated 14 times a week, MetalMiner continues to grow and attract an audience everywhere.
Follow
To ensure this doesn’t happen in the future, please enable Javascript and cookies in your browser.
Is this happening to you frequently? Please report it on our feedback forum.
If you have an ad-blocker enabled you may be blocked from proceeding. Please disable your ad-blocker and refresh.