First, we appear to be moving quite rapidly in the direction of a "state money only" system (i.e. full reserve banking), if the above chart is any guide. The chart is from an article by Jo Michell entitled "Misunderstanding MMT" published by "Critical Macro Finance."(Incidentally, that's not to suggest that Michell supports full reserve.)

At least there's been a big rise in the proportion of money supplied by central as opposed to commercial banks in the UK, and the sky has not fallen in.

Attaining full employment under a "state money only" system (i.e. full reserve banking) is not difficult, at least in principle: all the state (i.e. government and central bank) has to do is create and spend an amount of money into the economy such that households, firms, etc. have a sufficiently large stock of money that they are induced to spend at a rate that brings full employment.

Under a state money only system, people and firms would lend to each other (sometimes direct person to person and sometimes via banks) and there is no obvious reason why under that system interest rates would not settle down to some sort of genuine free market rate of interest.

In particular, in a genuine free market, suppliers bear the full cost of supplying/producing goods and services, and under full reserve, money lenders (aka banks) can only obtain money to lend out by first attracting that money from households, non-bank firms, etc. That is, banks cannot simply print/create money and lend it out, as they are able to do under the existing system.

The argument often put for letting commercial banks create money, namely that cuts their costs and encourages lending and investment won't wash: reason is that the "freedom to print" is a subsidy of those banks, and subsidies (while they obviously increase turnover for the subsidised industry) do not increase GDP: GDP is maximised where there are no subsidies, except where there is an obvious social case for subsidies.

Moreover, advocates of private money printing (e.g. the Vickers Commission) appear to be totally unaware that more lending by commercial banks means more debt. (I've done a word search of the Commission's report and can't find any reference to the substantial rise in private debts over the last ten years or so.)

It is precisely the fact of letting commercial banks issue money which renders them fragile and causes bank failures, bank crises and ten-year long recessions like the one we've just been through. Reason is that it's the "borrow short and lend long" process that makes banks fragile, and money by definition is a short-term liability of a bank. (See the abstract of paper by Douglas Diamond and Raghuram Rajan.)

Fifth: why no deposit insurance for unit trusts?

If having government stand behind the liabilities of lenders (i.e. deposit insurance) is desirable, why limit that luxury to entities that happen to call themselves "banks"? That is, there are unit trusts ("mutual funds" in the US) some of which perform almost exactly the same function as banks. That is they accept money from people and lend that money on (mainly to large borrowers like non-bank corporations.)

Yet bizarrely, unit trusts are specifically prohibited from making the promise that banks make to their depositors, namely that "you're guaranteed to get at least £X back for every £X you deposit with us." That is a glaring anomaly.

To be more accurate, banks can on the face of it create money without state support (i.e. without deposit insurance), and indeed they were doing that in the US in the 1920s and 30s. Trouble is that about a third of deposit money during that period went up in smoke, thanks to bank failures. Thus that so-called money was not really money at all, if by money one means something guaranteed not to lose value (inflation apart). (That "one third" figure comes from p.9 of Irving Fisher's book "100% Money and the Public Debt.")

I.e. that so-called money was more in the nature of shares in relevant banks, and as is normal with shares, some of those share-holdings lost value in spectacular fashion. 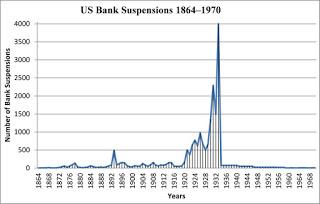 Ralph Musgrave
87 Followers
I am now retired. I studied economics at New College, Durham, UK and have had various papers and articles published in economics journals and books.
Follow
9 Comments
To ensure this doesn’t happen in the future, please enable Javascript and cookies in your browser.
Is this happening to you frequently? Please report it on our feedback forum.
If you have an ad-blocker enabled you may be blocked from proceeding. Please disable your ad-blocker and refresh.