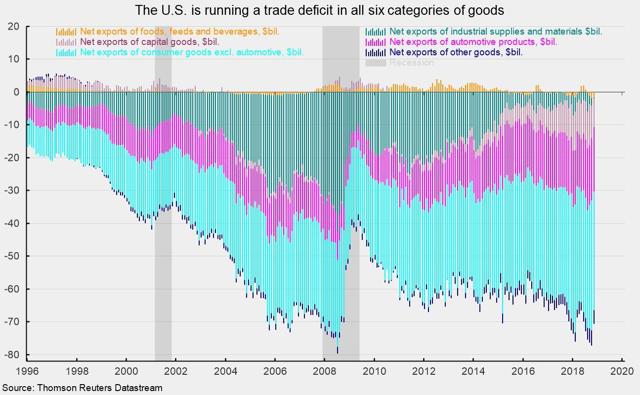 Within the goods area, the U.S. ran deficits in all six categories of goods in November (see chart). The largest deficit was in nonautomotive consumer goods, where exports of $17.0 billion and imports of $53.1 billion resulted in a net deficit of $36.1 billion. The next largest deficit within goods was automotive products with a deficit of $19.8 billion, followed by capital goods ($8.9 billion), other goods ($3.9 billion), foods, feeds, and beverages ($1.7 billion) and industrial supplies and materials ($0.1 billion).

International trade remains a contentious topic with ongoing trade disputes between the U.S. and several trading partners. The high level of uncertainty over trade policy is being noted in recent surveys of business leaders as a rising concern and is contributing to uncertainty regarding the outlook for 2019. That rising concern could contribute to more cautious hiring and capital investment for some industries and may pose a threat to the broader economic outlook for 2019.

American Institute of Economic Research
1.38K Followers
AIER educates Americans on the value of personal freedom, free enterprise, property rights, limited government and sound money. Our ongoing scientific research demonstrates the importance of these principles in advancing peace, prosperity and human progress. www.aier.orgFounded in 1933, AIER is a donor-based non-profit economic research organization. We represent no fund, concentration of wealth, or other special interests, and no advertising is accepted in our publications. Financial support is provided by tax-deductible contributions, and by the earnings of our wholly owned investment advisory organization, American Investment Services, Inc. (http://www.americaninvestment.com/)
Follow
To ensure this doesn’t happen in the future, please enable Javascript and cookies in your browser.
Is this happening to you frequently? Please report it on our feedback forum.
If you have an ad-blocker enabled you may be blocked from proceeding. Please disable your ad-blocker and refresh.