With no-deal Brexit risks increasing and sterling having already experienced a strong year-to-date rally, we are now expecting to see sterling fall against the dollar and euro.

In our view, the failure of Cooper-Boles and Grieve, and the success of the Brady amendment, materially increase the probability of a no-deal Brexit from 20% to 30%.

As with all market calls based on binary political outcomes, one must be particularly cautious about acting on them.

Where are we now?

Bottom line: With no-deal Brexit risks increasing and sterling having already experienced a strong year-to-date rally, we are now expecting to see sterling fall against the dollar and euro.

On Jan. 29, Parliament voted on seven amendments to the deal Prime Minister (PM) Theresa May has spent the last two years negotiating with the European Union (EU). Three of these, namely the Brady, Cooper-Boles and Grieve amendments, had the potential to be market-moving. The Grieve and Cooper-Boles amendments, which would have given Parliament the legislative tools to stop a no-deal Brexit and come up with an alternative, both failed to gain majorities.

In contrast, the Brady amendment won the backing of the House of Commons. This amendment forces the government to renegotiate the currently agreed deal in order to remove the Irish Backstop and replace it with unspecified alternative arrangements. Arguably, it sets PM May on a collision course with EU officials who have already rejected the idea of a deal without a backstop. Collectively, these votes help explain sterling's 1% peak-to-trough fall with the U.S. dollar on Jan. 29, as can be seen in Figure 1. 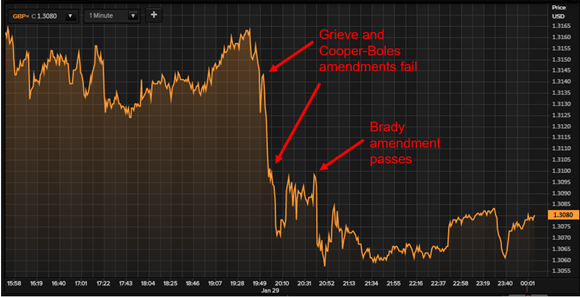 We agree with the market view that the parliamentary outcomes from Jan. 29 are indeed negative results for the UK and UK-based assets. However, we are surprised that the downward move wasn't bigger. In our view, the failure of Cooper-Boles and Grieve, and the success of the Brady amendment, materially increase the probability of a no-deal Brexit from 20% to 30%. Additionally, they also reduce the likelihood of the UK remaining in the EU or negotiating a closer relationship with the EU along the lines of a Norway+ agreement.

We do believe that the currently negotiated Brexit deal will eventually pass (this remains our central scenario, with a probability of 50% - up from 45% previously). However, the path to this scenario is looking ever more fraught with downside risks. Our general asset class implications of these various scenarios are outlined below.1

In Figure 2 below, we map these four Brexit scenarios discussed above to levels in GBP / EUR (sterling to euro) - the markets' main proxy for Brexit risk sentiment. As we can see, while the potential upside is substantial if we do get a softer form of Brexit than the one implied by PM May's deal, the recent run-up in sterling against both the dollar and the euro, as well as our own shifting Brexit scenario probabilities, mean we see limited short-term upside for sterling. Indeed, we expect sterling to fall from here as the political process to get May's deal through Parliament runs up against the clock, souring investor sentiment again. 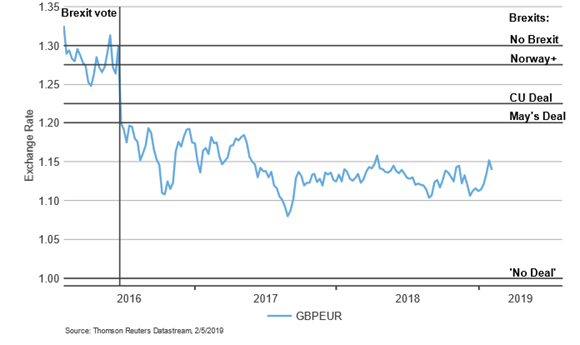 As with all market calls based on binary political outcomes, one must be particularly cautious about acting on them. However, given that the balance of risks has so materially shifted, we feel it may be appropriate to consider scaling back risk-taking in sterling. On a longer-term horizon, however, given our base case still remains that some sort of Brexit deal will transpire, a short-term correction in sterling could provide long-term investors with an attractive entry point.

1 The asset moves have been calibrated using closing prices from Jan. 21, 2019. Direction and magnitude of expected market reaction is based on experience from the post-referendum (after June 23, 2016) period. Our anticipated market reactions will not necessarily occur on the exit date (March 29, 2019). They may occur suddenly in the run-up to the exit, if unexpected but clear political outcomes materialize. Alternatively, market moves may play out gradually over an extended period of time, if the political process evolves toward the outcome slowly.

These views are subject to change at any time based upon market or other conditions and are current as of the date at the top of the page.

Forecasting represents predictions of market prices and/or volume patterns utilizing varying analytical data. It is not representative of a projection of the stock market, or of any specific investment.

The general information contained in this publication should not be acted upon without obtaining specific legal, tax and investment advice from a licensed professional. The information, analysis and opinions expressed herein are for general information only and are not intended to provide specific advice or recommendations for any individual entity.

Please remember that all investments carry some level of risk. Although steps can be taken to help reduce risk it cannot be completely removed. They do no not typically grow at an even rate of return and may experience negative growth. As with any type of portfolio structuring, attempting to reduce risk and increase return could, at certain times, unintentionally reduce returns.

Investments that are allocated across multiple types of securities may be exposed to a variety of risks based on the asset classes, investment styles, market sectors, and size of companies preferred by the investment managers. Investors should consider how the combined risks impact their total investment portfolio and understand that different risks can lead to varying financial consequences, including loss of principal. Please see a prospectus for further details.

Indexes are unmanaged and cannot be invested in directly.

This material is proprietary and may not be reproduced, transferred, or distributed in any form without prior written permission from Russell Investments. It is delivered on an "as is" basis without warranty.

Follow Russell Investments and get email alerts
+
Add a comment
Disagree with this article? Submit your own.
To report a factual error in this article, click here.
Your feedback matters to us!