Sometimes, the market buys into a story so completely that it becomes blind to reality. The "Retail Apocalypse" is one story that dominated the market in 2018 and crushed mall REITs of all stripes. Like most fears, there is an element of truth. There has been an increase in brick & mortar retailer bankruptcies, and that has put pressure on mall landlords.

Sometimes, the story is so strong that the market fails to realize when the fundamentals are improving, and remain negative, even as companies become more profitable.

Macerich (NYSE:MAC) is an example of fear blinding the market to reality. MAC has shown tangible growth in a variety of metrics. Their malls demonstrate their health by rising sales, their tenants have enjoyed a decreasing cost of occupancy, rental rates have been rising, and occupancy has been rising.

Additionally, the Sears (OTCPK:SHLDQ) bankruptcy provides MAC with an opportunity to replace a tenant that pays nominal rent with new tenants that are more appealing to consumers and pay a higher rent. It is a redevelopment opportunity that they have been waiting a long time for.

Unlike tier 2 operators like CBL Properties (CBL) or Washington Prime Group (WPG), nobody questions whether MAC will be able to afford the bill without risking their dividend. In fact, MAC just raised their dividend at the end of 2018. 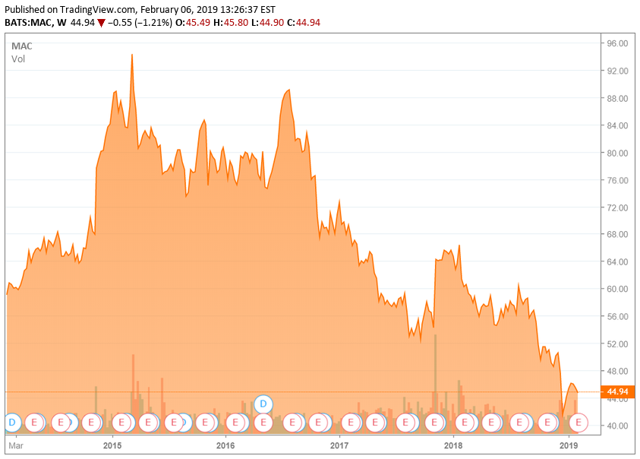 Despite strengthening fundamentals and a straightforward path to future growth, MAC is trading at 5-year lows and a lower Price/FFO ratio than they have traded at since the depths of the recession in 2009.

This is the kind of situation that should make any investor salivate, a stable company, with improving fundamentals, trading at 5-year lows, at the lowest valuation multiple it has had in a decade, a dividend over 6.5% and predictable growth ahead of it. 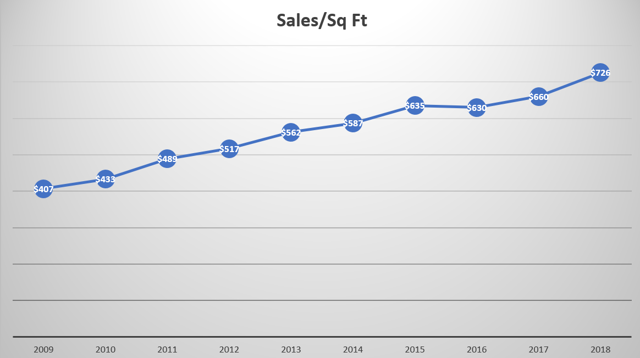 Sales per square foot is a metric that tells us the relative health of tenants. Despite the "Retail Armageddon," MAC has been able to consistently increase the average sales per square foot at a CAGR of approximately 6.6%. This is due to a combination of disposing of lower quality properties, redeveloping properties and signing leases with higher quality tenants.

Contrary to popular belief, people are still going to the mall and spending large amounts of money. More importantly, they are going to MAC malls. Among public mall REITs, MAC's average sales per square foot is only exceeded by Taubman (TCO). 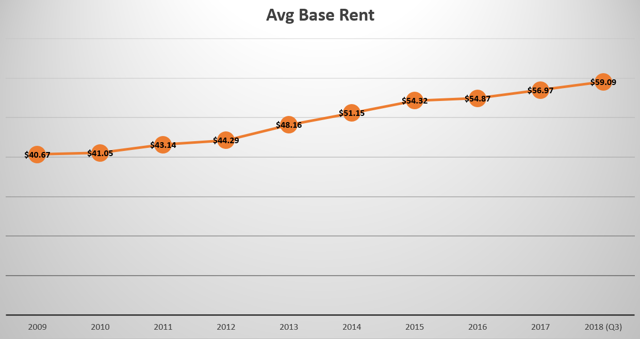 Sales per square foot is positively correlated with base rent. The more sales a tenant makes at a location, the higher rents they are going to be willing to pay. While there has been some variance, MAC has managed to increase average base rent per square foot every year for the last decade. 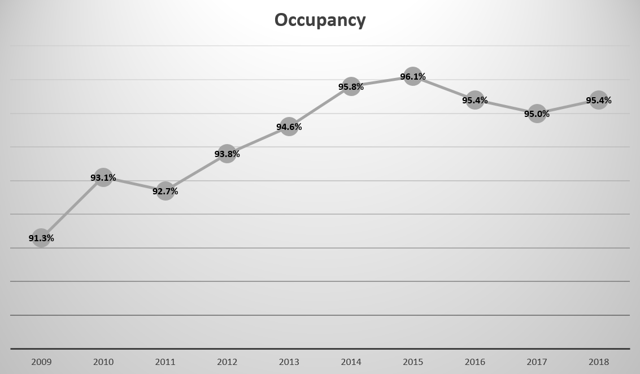 In terms of occupancy, MAC has stabilized around 95% despite the surge of retailer bankruptcies. It is reasonable to expect it to trend down slightly as Sears vacates and it takes time to redevelop. Though the environment is not nearly as bad as it was back during the Great Recession.

Sears: The Elephant In The Room

It has become impossible to discuss malls without talking about Sears. MAC has 21 malls with Sears stores. That sounds like quite a few, but MAC will not be redeveloping them all on their own. 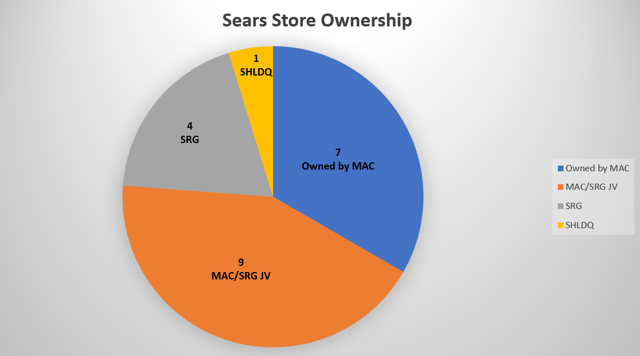 MAC only owns seven Sears boxes themselves, one of which is closed and the fate of the rest is uncertain. The JV with Seritage Growth Properties (SRG), is a 50-50 joint venture, seven of the stores are on the closing list and the other two have already been partially redeveloped. Four are owned outright by SRG, so MAC will have no financial obligation for those redevelopments. The final property is still owned by SHLDQ, it might eventually end up owned by MAC, SRG, or the JV.

So MAC will be 100% responsible for redeveloping seven or eight boxes, only one of which is definitely closing this year. They will only have to bear 50% of the cost for nine of them and none of the costs for the remainder.

A number of you have asked about co-tenancy issues if Sears closes all of their stores. At 11 of our centers we have zero co-occupancy exposure. At the other 10, the amount is immaterial in total about a $0.01 a share if all those locations close. Of the 16 locations that we have ownership positions in and we would estimate our pro rata share of the capital requirements to redevelop those to be in the range of $250 million to $300 million spend over the course of the next three to four years.

With approximately $600 million in availability on their line of credit, $100 million in cash, and over $300 million in FCF, MAC should have no issues funding the redevelopments. 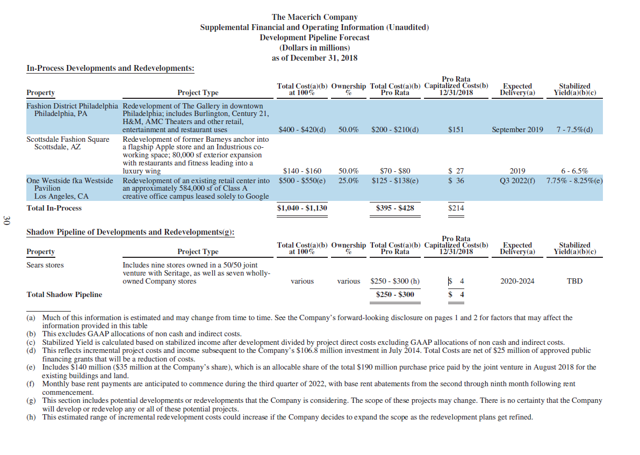 The obligation for redeveloping Sears is not significantly larger than the obligations that MAC has already taken on over the regular course of business.

Previously, MAC has traded at multiples of over 20x FFO. Recently, it has been trading in the low teens. Part of this is due to the market predicting declining FFO, mostly due to dispositions. 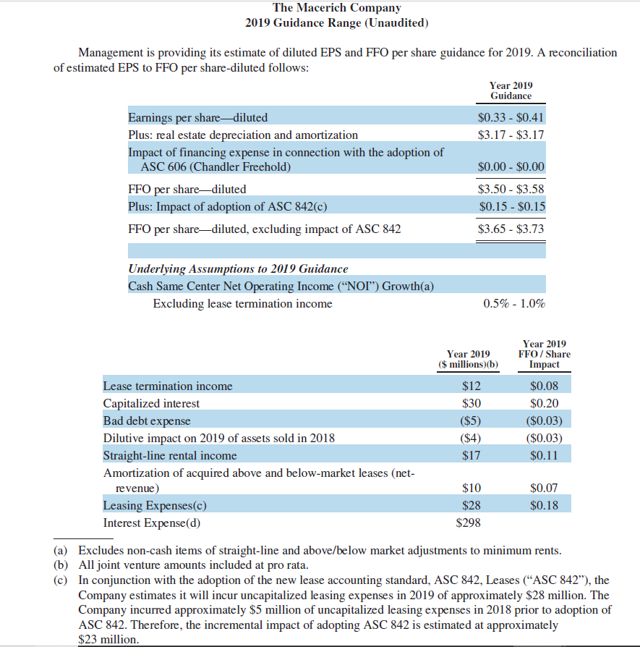 2019 guidance is for yet another decline, reflecting the loss of revenue from Sears, the impact of 2018 dispositions and the impact of adopting ASC 842. Assuming that MAC only hits the low end of guidance, and making no adjustment for the impact of ASC 842, MAC is still trading at only 12.4x FFO.

With their dispositions complete, MAC will be turning their attention to redevelopments. Two large projects are expected to be completed this year. It is reasonable to expect the Sears redevelopments to start being completed in late 2020. Additionally, despite the loss of revenue from Sears, MAC expects same-center NOI to increase 0.5%-1.0%.

From 2020-2024, MAC should experience consistent incremental growth from redeveloped Sears boxes being completed plus same-center NOI growth. Additionally, we can expect MAC to continue their regular development projects, such as their 50/50 JV with Simon Property Group (SPG) to build Los Angeles Premium Outlets.

As the market perception of MAC as a REIT with declining FFO changes to a REIT with growing FFO, the valuation multiple should expand back into the mid-teens. If the general fear of brick and mortar also subsides, MAC could return to pushing 20x FFO. Investors who are brave enough to buy near the bottom will experience the compound benefit of growing FFO and a higher multiple.

Mall REITs have been dragged down by the market's fear of all things brick and mortar. There are real challenges that these REITs have faced. MAC, in particular, has seen their FFO decline as they disposed of lower performing properties and experienced tenant bankruptcies.

Looking at the fundamentals, MAC's repositioning is working. Their sales-per-square-foot have been steadily increasing, which has in turn been driving a rising average rent with lease spreads above 10%. Occupancy has stabilized in the 95-96% range. Despite the drag of retailer bankruptcies, MAC has consistently managed to produce positive same-center growth.

MAC is well positioned to manage a Sears liquidation. Through JVs, they have reduced their exposure to a manageable level. It will take time for the redevelopments to come online, but when they do, MAC will be replacing all of the lost revenue from Sears, and quite a bit more. Redevelopment of Sears stores should also have an inflationary impact on rent for inline space in those malls.

The market is focusing on the Retail Apocalypse story and the declining FFO headline. It is ignoring the fundamentals which will drive growth in the 2020s. Patient investors have an opportunity to invest in MAC at a 6.5% yield, and grab some capital gains upside when the market comes around to recognizing the error.

Beyond Saving
4.9K Followers
Author of High Dividend Opportunities
The #1 Service for Income Investors and Retirees, +9% dividend yield.
As a professional in commercial real estate, my investment focus is on REITs. My goal is to provide detailed research on the properties being acquired and sold by REITs, as the quality and value of the real estate purchased by a REIT has an impact on the long term health of a REIT.

Disclosure: I am/we are long MAC, SPG, WPG. I wrote this article myself, and it expresses my own opinions. I am not receiving compensation for it (other than from Seeking Alpha). I have no business relationship with any company whose stock is mentioned in this article.

38 Comments
To ensure this doesn’t happen in the future, please enable Javascript and cookies in your browser.
Is this happening to you frequently? Please report it on our feedback forum.
If you have an ad-blocker enabled you may be blocked from proceeding. Please disable your ad-blocker and refresh.