At today’s market price I believe CorePoint (NYSE: CPLG) presents a very good opportunity for investors to profit up to 100% in the near future based on improved operating performance in 2019 as well as a stock price that is in closer alignment with the true value of its assets.

Feelings have been quite mixed among those who decided to take part in the spin-off event of CPLG eight months ago. I am one of those people. I had initiated a position in La Quinta prior to the spin which represented 5% of my portfolio at the time. Shortly after I received my CPLG shares, I luckily sold them in order to allocate the cash to another investment. I am quite happy that I sold when I did. Initially, CPLG received a lot of interest with its share price being driven up to as high as $27.53 but since then has gradually dwindled to just over $12.

While the stock has changed considerably, the actual business has not. CPLG’s CEO is still the same, their official corporate strategy is the same and the deal they have with La Quinta’s parent Wyndham (NYSE: WH) is still the same. CPLG stock is currently trading at an EV/EBITDA multiple of just over 9 based on its full year 2018 guidance of $177 million of adjusted EBITDA. It is also trading at 50% of its recorded book value based on a market cap of $750 million and book value of $1.4 billion or $24 per share (Source: CPLG SEC Filings).

The main issues that seem to have turned people away from this stock are the delay in the strategic turnaround of their re-positioned hotel properties, an overall loss in faith in management’s inability to deliver on their strategic vision and the chance of a cyclical downturn in the near future. What also could have been a very big driver in the price drop is “investor boredom.” Many special situation investors only give a very short time frame for their investments to work out and do not have a long-term interest in holding these types of businesses.

But the real money is not always made immediately before or after the events. Many times, the seemingly uglier entity loses out considerably when investors run away after they fail to see an immediate profit. Every business has an intrinsic value which is associated with the underlying entity whether it is good or bad. As value investors, we should be more interested in determining what that value is and the probability of it being right.

So, what is the problem with CPLG? It has been falling short of expectations. In the first 9 months of 2018, they have spent over $138 million on capital expenditures with only $68 million of operating cash flow (Source: CPLG SEC Filings). This is not sustainable. Many investors are hesitant to invest in companies that seem cyclical in nature right now and if CPLG’s results look this bad at the peak performance of the US economy than what will they look like during a recession?

With the combination of its room expenses going up and the addition of new management/franchise fees from Wyndham, CPLG is having a tough time producing any owner’s earnings. From a DCF perspective, you would expect that CPLG should at least have owner’s earnings of $74 million based on a multiple of 10 however operating results from CPLG have missed this target considerably so far. Many people prior to the spin invested on the premise that management was working towards having some big performance in the last 2 quarters of 2018.

However, in the first 9 months of 2018, CPLG’s revenue only increased marginally from 2017 by $6 million (+0.97%, $644 million to $650 million), while operating expenses increased by $96 million (+17%, $560 million to $656 million) (Source: CPLG SEC Filings). The cost increase was partially due to the initiation of the management and royalty fees which amounted to $32 million but still leaves a difference of $64 million from the previous year (Source: CPLG SEC Filings).

Ironically though management still seems to be fairly pleased with their YTD performance where they have managed to achieve comparable RevPAR growth of 3.6% driven by a 3.5% increase in comparable ADR and a 10-basis point increase in occupancy (Source: CPLG Quarterly Call). A part of these results can be attributed to their renovated/re-branded hotels that are nearly all complete as well as the reconstructed hotels that were damaged from hurricanes in 2017.

Currently, CPLG has $2.4 billion of real estate assets employed in their business which is not providing any return to their shareholders. If you determine that CPLG is undervalued then you have to believe that either their management will increase their owner’s earnings in the near future or that a strategic buyer will pay more than 50% of the recorded book value for CPLG’s properties under the assumption that they could re-establish the assets into a more profitable entity.

While these sales only reflect a very small portion of their overall portfolio, it gives some confidence that CPLG’s book value is not overvalued by as much as 100% from today’s market valuation. Additionally, there is still room for hope that there is going to be some upside to earnings once CPLG becomes fully integrated with Wyndham’s programs and booking services. 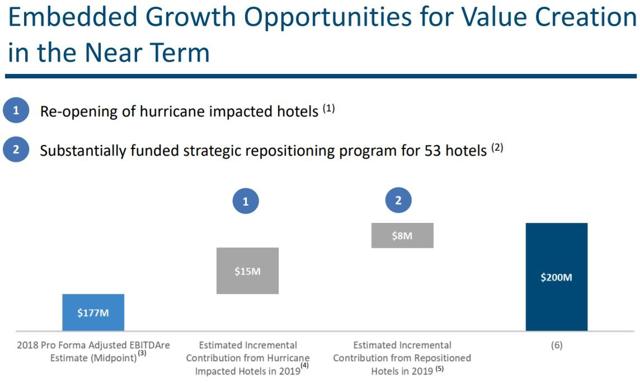 In my previous article on La Quinta (La Quinta Merger: Don’t Sell), I didn’t think there was much downside risk in the CPLG spin-off due to the stock price reflecting its stated book value at the time. Now that it is trading at 50% of that value, I think there is even less downside risk. Based on a sample of historic listings of La Quinta properties (listed below), it is very unlikely that the assets are worth any lower than what the stock price is reflecting.

The average list price of the sample properties found is $59,100 per room and although these listings are a bit old, it seems to provide further reassurance that their book value is not as far off as the market indicates. Currently, CPLG has 40,400 rooms which are valued at just shy of $61,000 each on their balance sheet without accounting for associated liabilities. If you account for the liabilities, less cash on hand, you are essentially buying the business for a price of $42,079 per room. At this price differential, you would think there would be some bargain hunters who would be interested in the property even considering the poor operational performance in the past 3 quarters of 2018.

While there is always the risk that management takes on more debt to fund poor operational performance in the short term, I believe based on the historical performance of the CEO (Keith Cline) prior to the spin, there should be some assurance that this won’t happen. Most shareholders of La Quinta were happy with the sale price that was negotiated for the La Quinta franchise business. Now it is time for him to deliver on CorePoint.

Alex Middleton
570 Followers
My name is Alex Middleton and I am a Certified Professional in Supply Management (CPSM) who made my first investment by buying 4 shares of Home Depot (NYSE: HD) in 1996. Quickly afterwards investing morphed into a passion and I have been investing my savings in various securities since. I believe investing requires one to carefully study publicly available information in an attempt to develop a thesis based on reason and logic. It also requires one to properly account for the unknown by applying probabilities and margin of safety to their thesis. Benjamin Graham and David Dodd said it best in a quote from their book Security Analysis: “Analysis connotes the careful study of available facts with the attempt to draw conclusions there from based on established principles and sound logic. It is part of the scientific method. But in applying analysis to the field of securities we encounter the serious obstacle that investment is by nature not an exact science. The same is true; however, of law and medicine, for here also both individual skill (art) and chance are important factors in determining success or failure. Nevertheless, in these professions analysis is not only useful but indispensable; so that the same should probably be true in the field of investment and possible that of speculation“ There are no short cuts to becoming a good investor. You have to expose your theses to a group that can provide identify gaps in your logic. I want to engage with the larger community of like-minded investors, so please contact me!
Follow

Disclosure: I am/we are long CPLG. I wrote this article myself, and it expresses my own opinions. I am not receiving compensation for it (other than from Seeking Alpha). I have no business relationship with any company whose stock is mentioned in this article.