The better than expected Q3 results are mainly related with the blowout numbers of Red Dead Redemption 2, released last year. In that manner, TTWO's investors should be very satisfied with RDD2 which sold more than 23M units worldwide. I think that CEO Strauss Zelnick's words would better express the case:

Our outperformance was driven primarily by the record-breaking launch of Red Dead Redemption 2 along with strong results from NBA 2K19. In addition, consumers engaged significantly with our offerings, and recurrent consumer spending grew 31% to a new record. We generated strong cash flow and ended the period with $1.6 billion in cash and short-term investments, after deploying $109 million to repurchase 1 million shares of our stock.

On the other hand, it was the weaker than expected guidance that raised investors' concerns regarding competition arising from the side of free-game players like Fortnite that finally sent shares declining by 14% after earnings release. I believe the market overreacted and see EA Sports (EA) as the main contributor for the negative sentiment revolving around the whole sector after posting very bad results. In order to make my case, just refer to EA's CEO comments as published by EA:

Q3 was a difficult quarter for Electronic Arts and we did not perform to our expectations."

Now compare the comments of EA's and TTWO's CEOs and try to figure out why did both shares decline by the same 14% on that day, as one company (TTWO) had a stellar performance whereas the other (EA) provided very poor results. Honestly, I find it difficult to explain. 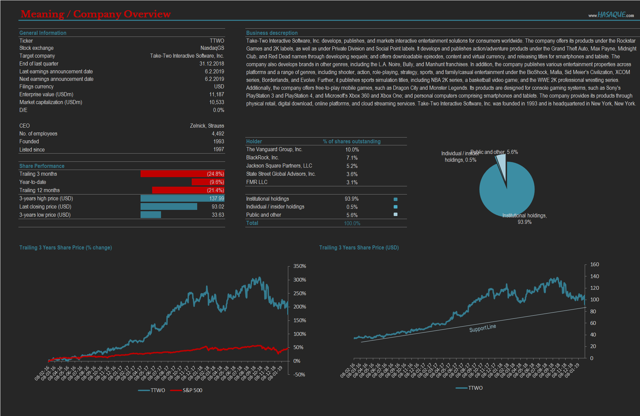 Looking into the historical financial results, TTWO has been showing consistent growth, while its 5-year CAGR amounts to 19% and EPS has been growing at an average rate of 60% during the last 3 years. Taking into account an operating margin of approximately 19% of revenue, things make real sense. It's also worth mentioning that the business has great cash flow generation abilities and a sustainable balance sheet (as of the date of this article, the company has no debt, while holding $1,055m in cash and equivalents).

Another reason for my appreciation of TTWO lies on its management, which has a demonstrated history of deploying cash to the benefit of shareholders. For the last fiscal year, return on invested capital amounted to 13%, while total equity increased by 37%. In addition, I appreciate the work of Mr. Zelnick and consider him to be a driven and owner-oriented CEO. I also believe that TTWO's shares buybacks provide the ideal proof for how strong the management conviction is in the company's growth narrative (the company repurchased 1 million shares of its common stock for $108.9 million during the last quarter).

Unlike many others who worry about future competition arising from the side of Fortnites-like, I believe that Fortnite's rise may be a great benefit to all video-game producers, as it cements the huge demand for quality content - will it be in free-based or in a cost-based model. The content is the king - we see that in Movies, TV and also in gaming. Any company which is capable of producing high quality content is due to lead its niche, and TTWO has what it takes to be that kind of leader.

Specifically regarding the video-game industry, we're talking about a $135b market which is expected to grow at mid to high-single digits during the next decade. As a market leader which has (in my opinion) the best pipeline of games within the industry, I strongly believe that TTWO's future is brighter than ever. Nevertheless, I do consider a potential acquisition of each of the leading video-game producers by some of the FAANGs, and see that as a viable scenario, which will ultimately raise the value of all players.

Trying to discount future cash flows by using conservative assumptions of forward 5-year revenue CAGR of 4.3% and operating margin of 19% of total revenue, I derive an intrinsic value of $129.5 per share, which is 40.3% higher than the last closing price ($92.5). Presented below is a DCF analysis as derived by using a 9% discount rate, sided by a sensitivity table. 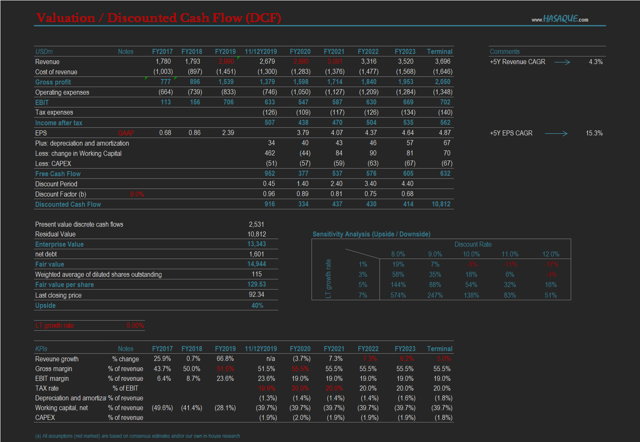 As you may see in the above table, any change in long-term growth rate is due to affect materially on any potential upside. Considering the possibilities for global expansion and strong financial position, I believe that the actual upside is even greater.

As a value investor, I like to assess my investments in the same manner as a private equity owner. In this case, assuming I would buy the whole business, I estimate it would take approximately 8 years to get my money back through the company's future operating cash flows. Considering a typical payback time of 10 years for public companies, I believe TTWO's risk/reward profile is better than the market average.

All in all, I am a great fan of TTWO and pulled the buying trigger, as I believe that current levels suggest a great value proposition for the long run. While the short-term growth rates might be lower than expected, the business has more room for growth and is well-positioned for cementing its leadership position within the industry. I believe the market overreaction presents a great buying opportunity and love to buy here and lower.

Zvika Finkelstein
73 Followers
Specializes particularly in the fields of business modeling and financial reporting analysis. Have high control of broad range of valuation approaches and methodologies and great experience in valuation analysis of private and public companies.
Follow

Disclosure: I am/we are long TTWO. I wrote this article myself, and it expresses my own opinions. I am not receiving compensation for it (other than from Seeking Alpha). I have no business relationship with any company whose stock is mentioned in this article.