US stocks (SPY, DIA, QQQ, IWM) are on the back foot in the Friday pre-market, after a modest setback on Wednesday and then a more dramatic fall of about 1% in Thursday trade.

US futures may simply be following European (VGK) and Asian (AAXJ, EWJ) stocks lower, as Friday was bumpy for international bourses (EFA, EEM).

Spot VIX, which has dropped rather impressively over the past six weeks or so, presently sits decisively more toward the lows of its one-month range. 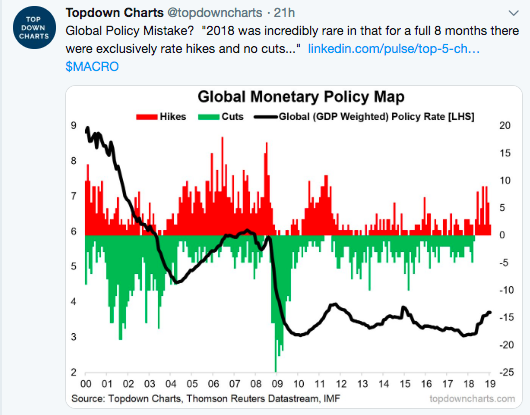 No cuts in 2018 for eight whole months? It's almost as though central banks began to believe that the world was in a state of recovery!

Note that the GDP-weighted global policy rate is still less than 100 basis points higher than it was back in 2009 as we were emerging from the worst of the GFC. I see fertile ground for higher volatility in the future, as central banks collectively may be out of ammo... what can they really do to truly stimulate the economy from here, with GDP-weighted policy rates a little more than a third of what they were in the year 2000?

Every day is a test of one form or other for assets that trade in secondary markets (such as the stock market).

But certainly it does seem as though the S&P is at a special cross roads. My belief is that, from a price action standpoint, the more time over the next couple months that SPX can spend between 2666 and 2825 - particularly at the upper end, the more likely the index can recover from last quarter's damage.

Technically, it was two days. But Wednesday's drop was pretty forgettable. The term structure took the familiar shape of contango, and may well repeat the pattern soon enough. But even as the week opened, the contango itself was fairly flat, so the bump higher at the front end makes sense. 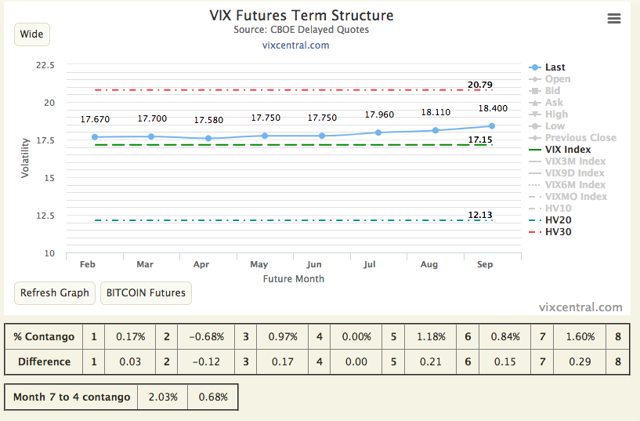 The yawning gap between HV20 and HV30 has narrowed considerably, as HV30 has gradually fallen. Spot VIX and the entire term structure is nestled between these two related measures of realized volatility.

It makes sense that any flare-ups in realized vol would push the VX futures more toward the upper end of the range. For now though, it is fair to say that futures traders in this market could far more easily be described as "wait-and-see" rather than "the-sky-is-falling".

US 10-YR US Treasury VIX acted as a major culprit, or at least symbiotic player, in volatility increases over the last twelve months (going back to the third week of January '18, really).

It may be notable then that the index is fairly close to the all-time lows that it posted in September '18, right around the time of the Q3 FOMC meeting that arguably played a role in lighting up the tumultuous Q4 for risk assets.

Some knowledgeable players are taking the push in VIX-related ETPs such as VXXB or UVXY as a chance to sell the rip.

The spread is short-dated in nature, with a decent premium given the expiration and the $2 embedded stop-out. The pre-market action is not going David's way, but the move hints at the reality that vol has to heat up and stay hot in order for the spread to max out. 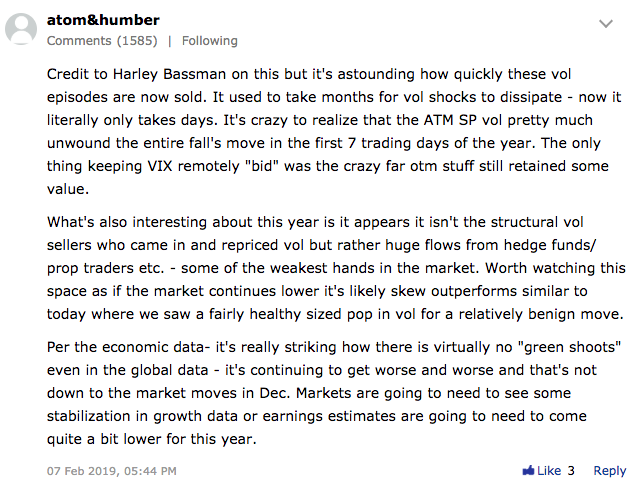 Many thanks to atom & humber for posting this comment yesterday. The sheer speed at which volatility plummeted was fairly eye-popping. Discussion on a potential mismatch between new-found market confidence and a potentially deteriorating global economy may well prove to be prescient in its implications.