Confusion and misinformation remain about Amarin Pharmaceutical’s (NASDAQ:AMRN) unexpected breakthrough clinical trial results released last fall for its cardiovascular drug, Vascepa. My previous Seeking Alpha article reviewed the facts. Here, I respond to criticism of Vascepa and include a deep dive on the mineral oil (MO) placebo issue, which continues to be raised despite clear evidence its impact is very minor.

The trial’s lead investigator, Harvard Medical School professor Deepak Bhatt, a leading authority not known for excessive claims, called it “the dawn of a new era in cardiovascular prevention … looking back in time this will be viewed as a major advance in cardiovascular medicine.”

A recent bearish Seeking Alpha article by Bhavneesh Sharma gave a $5 price target for Amarin, from a recent price near $16. The author, who disclosed his short position (I’m long), said doctors will advise patients to buy dietary supplements instead of prescribing Vascepa. He said the LDL-C (“bad” cholesterol) increase caused by the DHA many of them contain is small. His evidence for low current sales included chats with 5 local pharmacists. He said the statistical significance of Vascepa’s reported death reduction was too low. He cited mineral oil placebo concerns and said the FDA may ask for an additional clinical trial.

Two Seeking Alpha articles (rebuttal 1 and rebuttal 2) responded and disagreed. I add some remarks. In particular, the mineral oil criticism is so thoroughly discredited as a significant factor at this point that any mention of it ought to explain that its effect is very minor. I address that in the following section.

The REDUCE-IT (RI) trial clearly showed that tens of millions of Americans would benefit from Vascepa. My prior article explained why DHA/EPA blends have less benefit than pure EPA. DHA raises LDL-C, sometimes substantially. Lovaza, an EPA/DHA blend, reports on its label a 49% increase in LDL-C for subjects with very high triglycerides. Dietary supplements containing EPA without DHA are the subject of litigation. Amarin points out that, by law, they are drugs and cannot be sold legally. (By the way, dietary supplements are not OTC drugs.) Even if Amarin were to unexpectedly lose that legal battle, many millions of Americans can significantly reduce their risk of heart attack or stroke with Vascepa for a $3/month co-pay, far cheaper than a dietary supplement.

Every million additional prescriptions should add roughly $25 to the share price. Given the breakthrough trial results, Vascepa will almost certainly be FDA approved for CVD and become standard of care within about a year. Dietary supplements are not equivalent to Vascepa, are not tested for efficacy, and cannot legally claim to prevent disease. The FDA treats them like food, approved with a much lower standard than drugs. I don’t think most doctors would substitute a non-equivalent dietary supplement for an approved life-saving drug.

Nationwide sales are independently monitored and published weekly. Vascepa prescriptions have been growing strongly for years, but do not yet reflect much of the big ramp-up expected in response to the recent trial results and the resulting FDA label expansion expected in late 2019. Amarin is not yet advertising the trial results to consumers, pending FDA approval, and only recently started marketing to doctors.

I don’t believe pre-authorizations are the big obstacle Sharma suggests. I’ve had no problem (off-label $9/90 days co-pays for 5 years with both Aetna and United Health Care, using three different prescribing doctors. No one suggested a dietary supplement.) A single digit share price in two years would require an unforeseen catastrophe.

I agree with the many doctors who do not share Sharma’s serious concern about RI death statistics. RI was powered for major adverse cardiac events (MACE). With fewer cardiac deaths in the trial, larger p values were expected. The 20% CV death risk reduction was significant (p<0.03) and the 13% risk reduction for all-cause death was a clear trend (p<.09).

Amarin has an SPA (special protocol assessment) agreement with the FDA, which approved the trial design and specified the requirements for approval, which have been far exceeded. The FDA honors almost all of its SPAs, with exceptions for relevant science changes. I am unaware of any relevant science change or anyone but Sharma suggesting the FDA is even remotely likely to require another trial.

A buy out is possible at any time, or later, or never. Given a likely market of tens of millions taking it daily for the rest of their lives, Amarin's ultimate value is far higher than current prices IMO. Price targets are not my specialty or the primary topic of this post, but my long term expectation is in the range of at least $40 to $120 within about 1 to 3 years, based on a ballpark of about $25 in share price for every million prescriptions. I expect prescriptions to skyrocket after approval later this year, and to get a pretty good head start off-label in coming months.

A Deep Dive Into Mineral Oil

RI had a slight (7 mg/dl) increase in LDL-C in the placebo arm, which some suggested may have resulted from the mineral oil (MO) placebo hindering absorption of the statin. If true, that might have caused enough cardiac events to slightly exaggerate RI results. I agree with the many experts who have said that MO impact is clearly between zero and very minor, nowhere near enough to threaten Vascepa’s blockbuster status. In a careful review of media coverage, I found no claim to the contrary by any scientist, including Sharma. But, given the inordinate attention given to uncertainty about unquantified MO effects, possibly restraining the stock price and slowing adoption of life-saving treatment, we'll examine the evidence thoroughly.

Amarin's extensive FAQ page about the mineral oil placebo, with 54 scientific references, points out that it is generally understood that modest LDL-C increases like RI’s are consistent with normal natural variation, and larger increases are routinely reported in many other studies and clinical trials, including the ODYSSEY trial. Two prominent cardiologists agreed. Heightened lipid variability has been reported for higher trig subjects such as RI’s. JELIS, a major trial of essentially the same drug, was highly successful without MO.

The FDA approved MO placebos years ago after careful consideration, for RI and other trials. RI’s independent Data Monitoring Committee of lipid experts reviewed the unblinded data quarterly for seven years and reported no effect attributable to MO. The Associated Press reported independent experts confirmed any MO effect isn’t enough to alter the main results. Multiple leading authorities have said it is very minor at most.

Professor Bhatt called MO a flawed line of inquiry and said even if it weren’t, the RRR impact would be no more than 2% to 4%. He also reported RI’s placebo subjects with increased LDL-C did not have more events. They actually had fewer. That alone should settle the matter.

Statins are absorbed in the small intestine, which is typically an inch in diameter and 23 feet long. Even assuming the placebo is taken simultaneously with the statin (which is not known), it's hard to believe two 1 gram MO capsules would coat the intestine sufficiently to block statin absorption enough to cause enough cardiac events to significantly change trial results. (A gram is 1/28 of an ounce. A normal MO dose is 12 to 36 grams and generally considered safe. It’s sold by the pint as a non-prescription laxative.) Extraordinary claims require extraordinary evidence, so the burden of proof is clearly on MO critics. (Burden of proof is explained in the supplemental material section.)

An obvious way to roughly estimate the maximum possible MO impact is to multiply the maximum likely statin benefit by the maximum fraction of the statin that is suspected may have been blocked by MO. Statin’s absolute risk reduction (ARR) is between about 1% and 2%, less than half Vascepa’s 4.8%. And, 7 mg/dl is about a tenth or less of statin’s typical LDL-C reduction. So, even with the unlikely assumption MO caused the entire LDL-C increase, the maximum RI ARR impact is about 2%/10 = 0.2%, just 1/24 th of the 4.8% ARR. That would drop the RI RRR from 25% to 24%, still firmly in blockbuster territory (25% x 23/24 = 24%). (Just 15% would have been a big success, and 8% would have been marketable.)

RI recruited subjects with LDL-C under a threshold, some of whom probably had higher average LDL-C but got in during a temporary dip. Their LDL-C levels would naturally tend to rise back to their average, which is called regression to the mean. It's well-known and, along with age, probably caused at least some of RI's LDL-C increase.

Vascepa’s benefit can be viewed as the difference between the two curves in Figure 1. An adverse MO effect would bend the upper curve up, but virtually all the benefit is from Vascepa bending the lower curve down. For perspective, the JELIS control curve in Figure 2 shows variability comparable to RI, rising above its average slope with no mineral oil. Both figures show a delay of a year or two before benefits fully kick in, suggesting long-term benefits will be substantially better than reported. 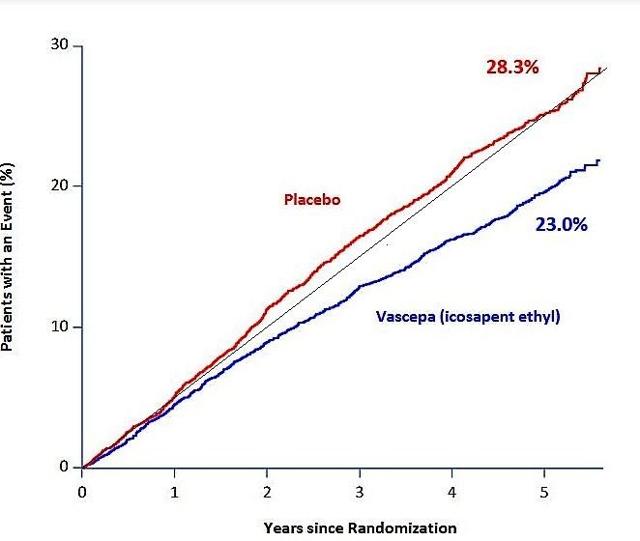 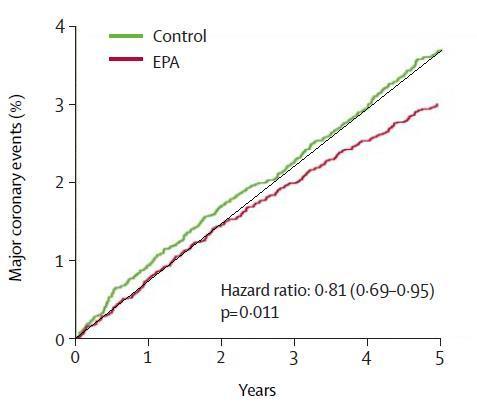 Figure 2 – JELIS Kaplan Meier event curves, with an added line between the initial and final points of the control curve (from Yokoyama et al, Lancet 2007; 369: 1090–98, except the added line).

Since Aristotle, educated people have understood that two things occurring together (such as rising LDL-C and MO) is not proof that one caused the other. It's a classic logical fallacy to claim otherwise. Scrutiny revealed remarks critical of RI were often hedged and/or possibly biased. From a November analyst report, two cardiologists who are considered key opinion leaders (KOL) "agreed that colleagues and respected KOLs who may appear bearish may have various agendas or biases that may impact their views."

Explanation of Burden of Proof

If there are 1,000 children on a playground, and only one has red hair, if a window is found broken by a ball, it can be said without further evidence that the window was very probably broken by someone without red hair. To suggest there could be more than a tiny probability that a redhead broke it would require very strong additional evidence. Burden of proof is a real thing, and it is very much against the claim that a two gram MO placebo could possibly have changed RI results more than very slightly.

I’m an engineer, not a medical or financial professional. I reference sources of information I believe are credible, but I offer no guarantee of them or this article, which expresses my opinions and does not offer medical or investment advice. I’m a firm believer in the benefits of Vascepa. I’ve taken it off-label for several years and am a long time investor in Amarin.

Charles Lyon
207 Followers
Charles Crosby Lyon is a semi-retired electrical engineer who did signal processing algorithm R&D for the intelligence community for many years and more recently has applied his skills in health sciences. He lives in Northern Virginia with his wife Barb.
Follow

Additional disclosure: I do not intend to trade AMRN for 72 hours after publication.

203 Comments
To ensure this doesn’t happen in the future, please enable Javascript and cookies in your browser.
Is this happening to you frequently? Please report it on our feedback forum.
If you have an ad-blocker enabled you may be blocked from proceeding. Please disable your ad-blocker and refresh.