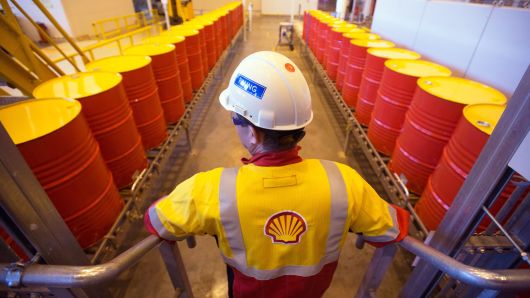 Royal Dutch Shell (RDS.A) (RDS.B) is the best oil supermajor worldwide, in my opinion, and ought to be one of the first oil stocks to be held as a long-term investment in any savvy investor's portfolio.

The Anglo-Dutch integrated oil company has never missed one single dividend payment since the end of World War II and has been considered a preferred stock for various institutional investors for many decades.

On June 6, 2018, Forbes published its 16th annual Forbes Global 2000 list which includes publicly-traded companies from 60 countries. Royal Dutch Shell is the first oil company in the list, at the 11th place, surpassing Exxon Mobil (XOM) which is at the 13th place.

This oil company is amongst a few essential companies that will support your financial stability through the inescapable good and bad times of this volatile market. The only question is to choose the best investing strategy that will maximize your gain.

However, as I have said in my preceding articles about Shell, I firmly believe that it is always vital to trade a portion of your long-term position to profit plainly from the inherent instability of the market. This strategy often creates a tie between investing and real financial success.

In Q4 2018 we delivered against each of these priorities. We had another strong quarter. Cash flow from operations, excluding working capital movements, was $12.9 billion in the quarter. This was at an average Brent price of $69 per barrel.

Which stock should I choose RDS.A or RDS.B?

According to an article that I recommend to read published by Forbes on September 30, 2018:

As per the norm, both 'A' and 'B' share have same voting rights, stake-holding level and dividends that you'd come to expect. But for U.K. and global investors in general, excluding U.S. investors, it would make better sense to acquire 'B' shares, as 'A' shares are tied to the Dutch tax system that sees dividends paid out to non-European Union (E.U.) residents minus a withholding tax of 15%.

On the contrary, London-listed 'B' shares have no withholding tax applied to the dividend payout thereby putting the full dividend amount (by shares held) into the holder's coffers.

1 - Revenues and other income

Royal Dutch Shell has reported revenues and other income for the fourth quarter 2018 of $104.63 billion, up 15.8% year over year and up 3% sequentially establishing a new revenues record again (please see chart above). The full-year profits surged 36% to $21.4 billion in 2018, which is the company's highest annual earnings since 2014. Below is the chart breaking down the earnings per segment since the 1Q'15.

This quarter saw a weakening of the prices of oil and gas sequentially. Global liquid price of oil was $59.89 compared to $68.21 in 3Q'18. Below are some financial components for 2018 compared to the preceding years. 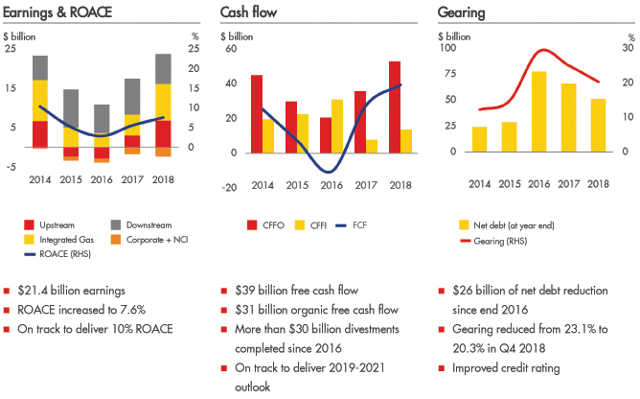 Free cash flow has increased significantly this quarter compared to the last three precedent quarters of 2018 and reached a whopping $14.87 billion in 4Q'18.

Shell has made $30.03 billion in free cash flow in 2018. Notice that dividend payout is approximately $15.8 billion now. Jessica Uhl, the CFO, said in the last conference call:

Based on this FCF (not including divestitures), Royal Dutch Shell is passing the FCF test, even with the implementation of a $25 billion buyback shares.

Shell is paying a current yield of 5.8%, which is one of the best returns in the oil sector.

3 - Oil-equivalent production and others

Upstream production was 3,788 K Boep/d this quarter, up nearly 1% compared to a year ago and up 5.3% sequentially. It was a substantial production number this quarter with a decent oil price close to $60 per barrel.

Production increased significantly from 2016 and had reached nearly 100 K Boep/d and is expected to be about 240K Boep/d by 2020.

The company began the start-up of Clair Phase 2 in the North Sea with an expected 120K Bop/d. Also, the three blocks in the Vaca Muerta in Argentina are moving to development and will produce in the mid-2020s.

The company is also investing in new Energies business. Jessica Uhl said in the conference call:

as part of our power portfolio in our New Energies business, we acquired offshore wind leases off the northeast coast of the US. These have the potential, if developed, to provide peak power generation capacity of 4.1 gigawatts, enough power to supply some 1.7 million homes. Shell is well placed to develop these opportunities, combining our offshore capabilities and our wind experience - along with the experience of our partners.

New projects are expected to deliver 150k Bo/d of new output in 2019 which is qualified by Ben Van Beurden as "more than enough" to offset field declines.

The net debt dropped to $50.1 billion at the end of December 2018 compared with nearly $65.36 billion a year earlier. Good progress was due primarily to divestments. 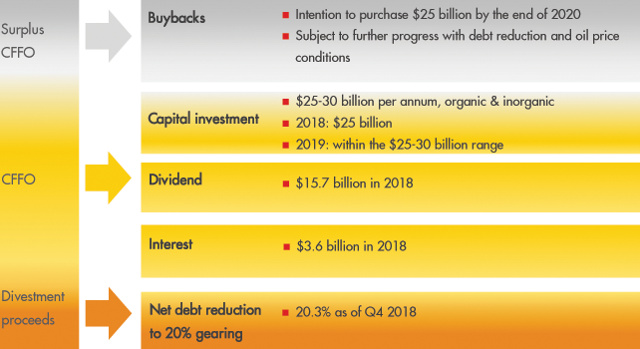 Net debt represents a notable reduction spread over the last eight quarters (please see the company's graph above). This substantial decrease was possible due to the completion of a $30 billion divestiture program completed in 2018, including revenues from the MLP spin-off called Shell Midstream Partners (SHLX).

Divestment proceeds, along with growing CFFO, have played a key role in bringing this down. Net debt decreased almost $26 billion since 2016, and around $9 billion since the last quarter. The net debt reduction in Q4 is supported by a large release of working capital linked to the drop in oil prices, as well as reduced inventory levels

Net Debt-to-EBITDA ("TTM") is now 0.81x, which represents the number of years Shell needs to pay off the debt theoretically. It is an excellent ratio that has been going down steadily. 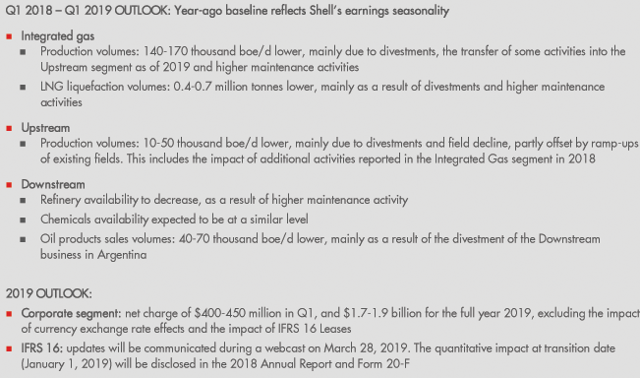 With such a cash machine in place, the company has lessened investors' doubts about whether Royal Dutch Shell can manage concurrently to reduce its debt load as it did again this quarter. It is a huge task to complete a massive share buyback of $25 billion by the end of 2020, pay one of the world's most substantial cash dividends reaching 5.8% and invest a strong CapEx estimated between $25 billion and $30 billion until 2020.

At least, the company is confident it will deliver it, with oil prices stay at or above $60 per barrel. However, I have my doubts and would like to see the company reduce the share buyback programme significantly.

Dividends and repurchases are delivering a more than 10 percent cash return yield to shareholders, by far the highest in the sector.

A small element of concern is that the company is not replacing what it produced in 2018 and it could be an issue down the road.

The company renewed about 50% of the 1.4 billion barrels of reserves produced and sold in 2018 which is well below the good replacement ratio that should be expected.

This under-investing issue could be due to a one-time-event though, due to the scrapping of the Dutch gas field reserves forced after earthquake risks. Without this special event, the replacement ratio would have been much better and close to 98%.

RDS.B is forming an ascending triangle pattern with line resistance at $64.75 (I recommend selling about 15% at this level) and line support at around $62 (I recommend buying and accumulating again). The chart above is not indicating the new line support which can be created by the low point in December 2018 and the low point at the end of January 2019.

Generally, traders consider ascending triangle patterns a bullish formation mid-term, but the issue is more complicated when it comes to this Industry because oil prices volatility can turn around this favorable situation quite unexpectedly.

Fun Trading
20.11K Followers
Author of The Gold And Oil Corner
As an experienced investor, I will help you stay on task more efficiently.

Disclosure: I am/we are long RDS.B. I wrote this article myself, and it expresses my own opinions. I am not receiving compensation for it (other than from Seeking Alpha). I have no business relationship with any company whose stock is mentioned in this article.

92 Comments
To ensure this doesn’t happen in the future, please enable Javascript and cookies in your browser.
Is this happening to you frequently? Please report it on our feedback forum.
If you have an ad-blocker enabled you may be blocked from proceeding. Please disable your ad-blocker and refresh.