Earlier this week, Pitney Bowes (NYSE:PBI) reported fourth quarter and full year 2019 results. The quarterly earnings missed estimates and the company also significantly slashed the quarterly dividend from $0.1875 per share down to $0.05. This change in structure may indicate the company's long-term decline is ending and that 2019 could present an opportunity to invest in what may become a long-term bottom for PBI.

The dividend cut will change the shareholder base

It is likely that a significant number of Pitney Bowes investors allocated to the company for its income distribution in the form of a sizable dividend. Prior to this week's cut, the company's dividend yielded around 11 percent, and has been at least double the market's average yield for the last several years. 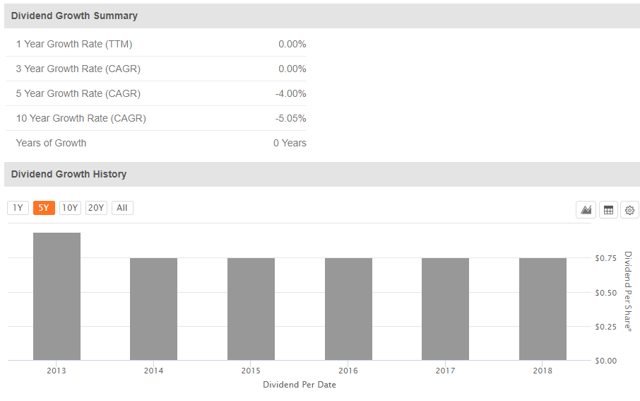 As the above shows, Pitney Bowes' annual dividend was cut to $0.75 several years ago, where it remained until this quarter. As the share price continued to decline, this constant payout ballooned a little more each year, until the yield reached double digits. 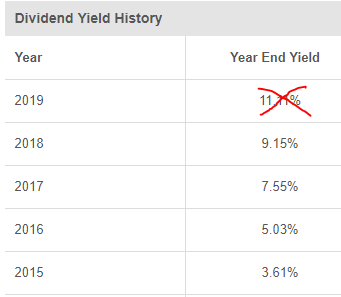 The allure of this significant dividend was a likely siren's song that would coax the income-starved to allocate throughout the last decade. The cutting of that dividend payout by over 70 percent is likely to send a great many such investors scurrying for the exit (albeit a little later than they would have preferred).

Similarly, cutting that sizable dividend will attract a different investor base. Value investors will appreciate that the company may improve the company's balance sheet and use future cash flow for initiatives other than immediate distribution.

Accelerating the buyback could set a bottom

On February 4, 2019, PBI's Board of Directors authorized an incremental $100 million share repurchase, bringing the total current authorization to $121 million. This significant strategic shift from distributing the company's existing cash flow may be aggravating for income investors already allocated there, but it does make sense if the business really is undervalued and has cash flow, which it does.

Pitney Bowes anticipates modest revenue growth in 2019 and EPS to fall somewhere between in line and down 10% from 2018. (Source: PBI 1/5/2019 earnings presentation) 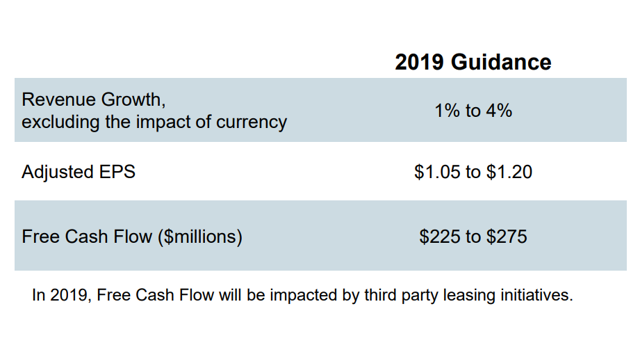 This guidance is likely to be reached, where per share earnings shall be supported by share repurchases. Free cash flow indicates the company can continue to repurchase shares next year too, as well as fund emerging market growth initiatives and also possibly also increase the dividend from this new reduced payout.

Shipping and sorting solutions is big business, and the greatest need for automation and production is in the emerging markets. Pitney Bowes is already an established name in commerce services.

Much of their weakness through the last several decades was due to reductions in mailing of envelopes that contained content that could instead be first faxed and then emailed. Nonetheless, some letters must be mailed and global shipping of physical goods is an ongoing concern. Pitney Bowes has large addressable markets that should continue to grow, and where Pitney Bowes may take market share.

Pitney Bowes may have had a flash capitulation

But that drop has since reversed, as value investors and technical traders stepped in to buy shares that income investors were selling, taking it back to roughly where shares were before announcing the cut and miss. The immediate reaction was essentially neutralized, even as the broader market weakened.

Pitney Bowes will have to pay down and restructure debt

Another concern that could present itself in 2019 and 2020 is debt. The company has a significant amount of bonds coming due over the next several years, but also term loans maturing in 2019 and 2020. As a result, Pitney Bowes will have around $450 million in debt maturing this year and $800 million in 2020.

This was more likely to be a problem with interest rates increasing, as they were during much of 2018, but recent declines in interest rates bode well for Pitney Bowes' ability to refinance under better than expected relative terms. Declining rates should help free up cash flow and earnings, while increasing rates will hurt them. It is also possible that Pitney Bowes may have to enter financing terms that could allow for equity dilution, depending upon their credit quality and average interest rates over the next few years. This is a concern for all leveraged companies with maturing debt.

Pitney Bowes' ability to refinance would be greatly improved if it could improve its credit quality, but that appears unlikely at the moment. Pitney Bowes' debt is presently just outside of investment grade (Ba1/BB+). Increasing existing debt repayments may help Pitney Bowes obtain such a credit rating increase, though that is probably unlikely in the immediate future.

Pitney Bowes should have reduced its dividend years ago, and should have similarly maintained lower levels of corporate debt. The company is now changing strategies, and the move may help Pitney Bowes find a long-term bottom. It would not be surprising if an activist takes interest in Pitney Bowes during 2019, given the company has become so cheap, has significant free cash flow, is buying back shares and is going to be refinancing debt. Any such announcement of activism is also likely to create a pop in share price and may contribute to this current trading range becoming a long-term bottom.

Zvi Bar
4.91K Followers
Zvi provides advisory services to companies, trusts, and individuals, including consulting expert services regarding retirement and estate planning. Zvi is admitted to practice law in the state of New York, where he offers cash management, Bitcoin, and Trust Protector services. Zvi is also The Claw of The Lava Empire and is an Amazon Influencer. No articles or discussions here shall constitute a legal, fiduciary or advisory role, but solely act as informative press and/or a starting point from which, ideally, further constructive discussion may follow. Comments are welcome, as are questions.