Over the past 2 weeks, we've profiled several high yield companies in the midstream energy industry, with our 2 articles:

"Income Investors: A Wave Of 6% To 11% Cash Yields Is Coming Your Way In February"

Three of these companies have reported Q4 '18 earnings with very good results:

Enterprise Products Partners LP (EPD) is often seen as the "Cadillac" in this industry, due to its well-managed growth and debt leverage management. Unlike many companies in this industry, which grew too fast and became over-leveraged, EPD has routinely retained a chunk of its distributable cash flow - DCF - to help self-fund its growth projects.

This approach has aided EPD in not becoming over-leveraged. Interestingly, we're seeing the self-funding approach referenced much more often over the past year in midstream companies' quarterly earnings presentations and earnings calls. Apparently, other management teams have picked up on EPD's success.

EPD is a giant, with a $60B market cap, compared to newcomer Hess Midstream Partners LP (HESM), which IPO'd in April 2017.

"We accomplished this while primarily self funding both our $325 million consolidated expansion capital program and our growing distribution, ending the year with no debt. In addition, based on our 2019 guidance, we can achieve our growth targets without the need for the equity market or dropdown until beyond 2021 and sees without the need for the equity market for the foreseeable future." (Source: Q4 '18 earnings call)

NuStar Energy LP (NS) went through a major restructuring in 2018, merging its GP (NuStar Holdings - NSH) and eliminating its IDRs via a common unit issuance. It cut its common distribution from $1.095 to $.60 in Q1 '18, which greatly improved its common unit coverage in 2018.

NS: NS just reported its Q4 '18 earnings last week. Earnings were robust again, thanks to new assets contributing - EBITDA rose 15%; DCF rose 119%; Net Income rose 79%, and Revenue rose 13%, continuing the strong trend over the past 3 quarters. Sequentially, this was the 6th straight quarter of record revenues. Although EBITDA and Net Income were lower than Q1 '18, Q1 '18's higher figures were due to a 1-time insurance payment for hurricane damages to NS's Eustacia facilities.

Management made a major investment in the prolific Permian Basin in 2017, which has been ramping up and is outpacing general growth in the basin. They project the system's growth to more than double from 2018 to 2020.

"The fourth quarter capped off a very strong year on a consistent theme, achieving operational milestones and setting financial records. In total, we reported 8 operational financial records in the fourth quarter. Our liquid pipeline volumes, our natural gas pipeline volumes and propylene production volumes all set records. This operational performance supported our fourth quarter record gross operating margin of $2.1 billion compared to $1.5 billion for the same quarter in 2017 and provided a 1.7x coverage compared to 1.4x for the same quarter last year." (Source: Q4 '18 earnings call) 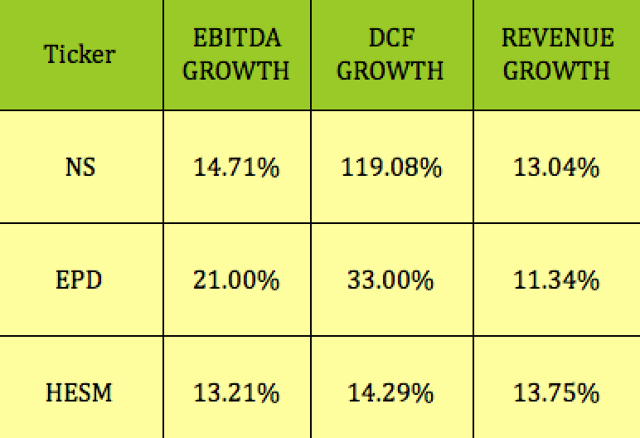 Although EPD has the lowest yield of the group, its distribution coverage factor is the highest, at 1.54X - this is also one of the highest we've seen in the high yield midstream space. It also has a string of 67 straight quarterly distribution hikes going and has raised its total annual payout/unit for 20 years in a row.

HESM's board increased the fourth quarter distribution by 3.5% quarter-on-quarter and 15% year-on-year, in 2018. This was the 6th straight distribution hike for HESM.

Coverage has been strong for HESM thus far - it averaged 1.27X in 2018 and hit 1.25X in Q3 '18. For 2019, management anticipates a distribution coverage ratio closer to its 1.1x long-term target in the first half of 2019, followed by higher coverage in the second half of the year, in line with the expected volume ramp-up of the LM4 gas processing plant.

UBTI Taxes for IRA Accounts - All 3 of these companies issue K-1 reports to unitholders at tax time. IRA holders are required to report anything over $1,000.00 of UBTI (unrelated business taxable income) per year. The amount varies from year to year. Check with your accountant about the impact from these stocks before investing in them in an IRA account. They also offer the tax deferral feature of return of capital.

Dilution & Debt Leverage - Since they pay out the lion's share of their cash flow to investors, MLPs have to access capital in the debt or equity markets, in order to invest in growth projects. This is one of the reasons that EPD's self-funding model has caught on recently - with interest rates rising, at least for the present, investors have become more concerned about debt levels.

(See the Financials and Debt sections for more details.)

Commodity Downturn - Although these companies have fee-based, minimum volume commitments, a prolonged downturn in energy prices will cause Mr. Market to head for the exits, until the upcycle returns, as we saw in 2015 to February 2016.

So, where do these big 2019 gains put these stocks, in relation to analysts' low and average price targets?

Even though it has the biggest YTD price gain, HESM is still the furthest below analysts' price targets - it's 17.81% below the $25.00 low target and 25.35% below the average price target.

NS's 2017 distribution cut and former coverage struggles have made the market discount its Price/DCF, which, at 7.59, is much lower than EPD's figure of 10.56, and HESM's 12.74 figure. NS also has the lowest Price/Book and EV/EBITDA of the group.

One reason for HESM's premium Price/DCF valuation could be its management's commitment to maintaining 15% distribution growth and also not issuing new units in at least 2019.

EPD, as an industry leader, continues to receive premium valuations for Price/DCF, Price/Book, Price/Sales, and EV/EBITDA.

HESM ended 2018 with no debt - it had a tiny amount of interest earlier in 2018, which is why its EBITDA/Interest Coverage is a bodacious 74.38. HESM also leads the group in ROE, current ratio, and Operating Margin.

With NS already 7.5% over its lowest price target and just 6.6% below its average price target, you may want to consider selling cash secured puts below its current price/unit, in order to get a lower breakeven.

You can track this trade on our free Cash Secured Puts Table, which features over 40 other put-selling trades, all of which are updated throughout each trading day.

We rate HESM and EPD as buys and NS as a short-term put option trade, given its current price level. All tables furnished by DoubleDividendStocks.com, unless otherwise noted.

Disclaimer: This article was written for informational purposes only and is not intended as personal investment advice. Please practice due diligence before investing in any investment vehicle mentioned in this article.

CLARIFICATION: We have two investing services. Our legacy service, DoubleDividendStocks.com, has focused on selling options on dividend stocks since 2009.

We scour the US and world markets to find solid income opportunities with dividend yields ranging from 5% to 10%-plus, backed by strong earnings.

Find out now how our portfolio is beating the market in 2019.

Disclosure: I am/we are long EPD, HESM. I wrote this article myself, and it expresses my own opinions. I am not receiving compensation for it (other than from Seeking Alpha). I have no business relationship with any company whose stock is mentioned in this article.