AVZ with another batch of impressive drill results at Manono. 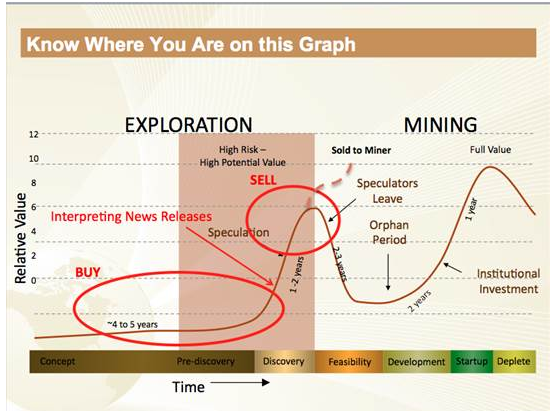 If you're into investing in the mining sector, you should know the above chart very well. Exploration and discovery can add a lot of value for a mining company across all stages of its life cycle, although the greatest increases in the share price usually happen when a small company makes a major discovery and the hype arrives. However, great exploration results can also improve the economics of large projects of established global mining companies.

I'm planning on writing a weekly series of articles in which I will analyze the three projects with the most significant drill interceptions over the past week as well as the prospects of the companies which own these projects. I will use data from the weekly bulletin of RSC Mining and Mineral Exploration, which can be found on its website. Note that the drill interceptions are converted into grades of gold equivalence using the following formula:

RSC Mining and Mineral Exploration has chosen gold as the metal equivalent for all conversions as it considers it the most widely used and best understood benchmark to determine or appreciate the grade tenor of a drilling intercept.

1) Manono lithium project in the DRC 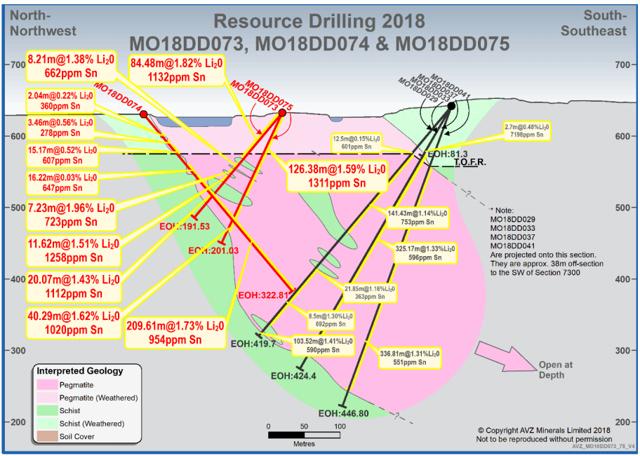 AVZ said that infill and north-east extensional drilling at Roche Dure identified additional high-grade lithium and tin mineralization which was not included in the November 2018 JORC Resource. Results from the drill holes will be included in a new JORC resource which is expected to be released in March 2019.

The November JORC estimate used assay results for holes up to and including MO18DD066:

Manono is in the southern part of the DRC and it could be the world's best lithium-rich lithium, cesium, tantalum (LCT) pegmatite deposit: 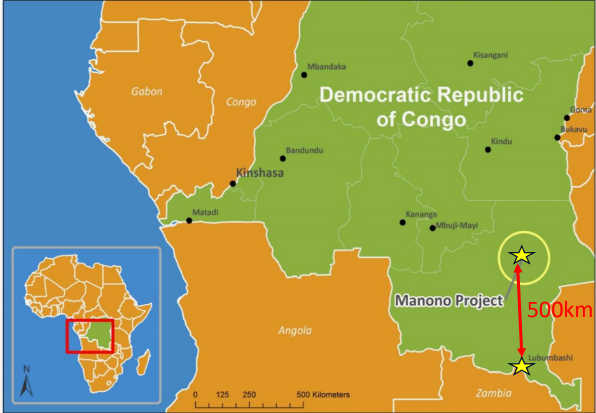 On 9 October, AVZ announced the results of a scoping study which outlined a project with the capacity to produce an average of 440ktpa of 5.8% Li2O spodumene concentrate over an initial 20-year mine life. I think the economics of the project look great, and one of the metrics that really impressed me was the low stripping ratio which stands at 0.7:1. 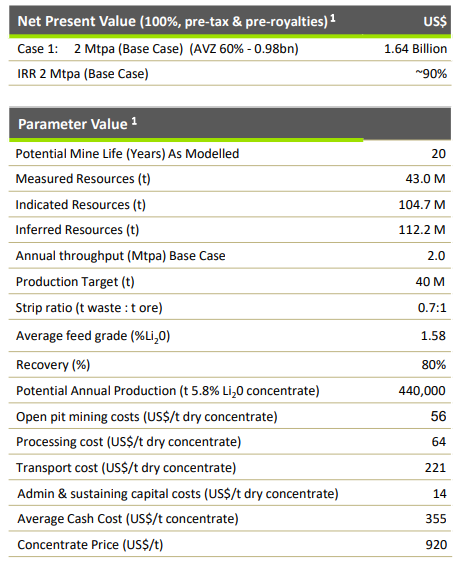 The initial capex for Manono is expected to come in at $150 to $160 million, including a $36 million contingency. The scoping study does not include tin by-product credits, which I think have the potential to significantly improve its economics. AVZ Minerals thinks that its funding model will most likely include a mix of debt, equity and off-take financing. The company plans to complete scoping studies for 5Mtpa and 10Mtpa operations as well as a full feasibility study. The latter should be completed in the second quarter of 2019.

2) Kiena gold mine complex in Canada

On 28 January, Wesdome Gold Mines ( OTCPK:WDOFF) announced results from underground exploration drilling at the Kiena Deep A Zone of its Kiena mine complex in Val d'Or and the best interception was 30.6m @ 33.7 g/t Au from 280m in hole 6384A. This is equal to 1,031(AuEq.)m. 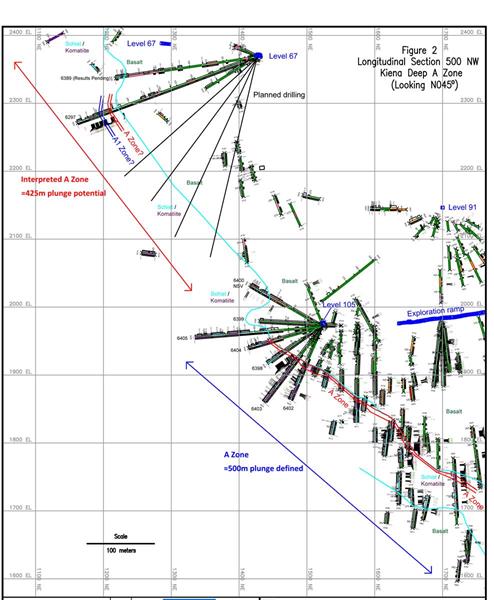 The current program is focused on the up and down plunge extensions and recent resource infill. Wesdome plans to drill around 50,000 meters with five drills as part of the 2019 underground exploration program at Kiena. The company plans to release an updated resource estimate later in 2019 and this will serve as the basis for a preliminary economic assessment.

Kiena is a high-grade past-producing mine in Canada and it has more than 2.8 million ounces of historic gold production. The project was put under care and maintenance in 2013 and it has a 2,000 TPD permitted mill as well as a 900-meter production shaft. The property consists of a contiguous block of mining claims and concessions covering more than 7,500 ha with eight shafts: 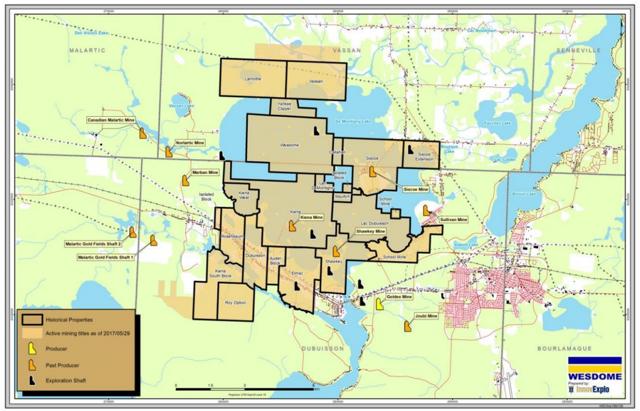 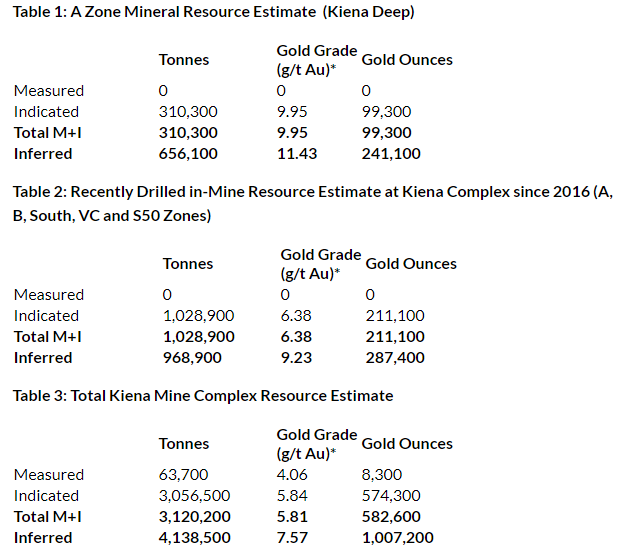 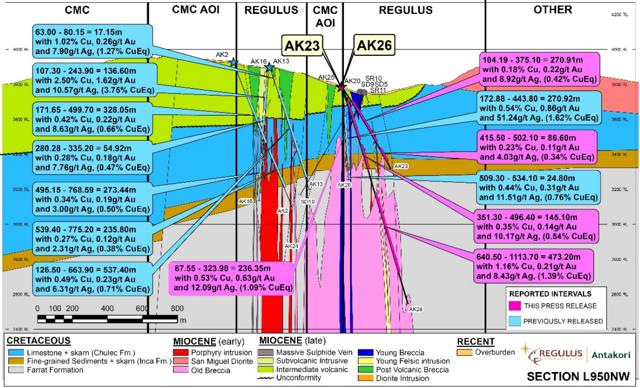 AntaKori is located in northern Peru and is located just seven kilometers from the Cerro Corona copper-gold mine: 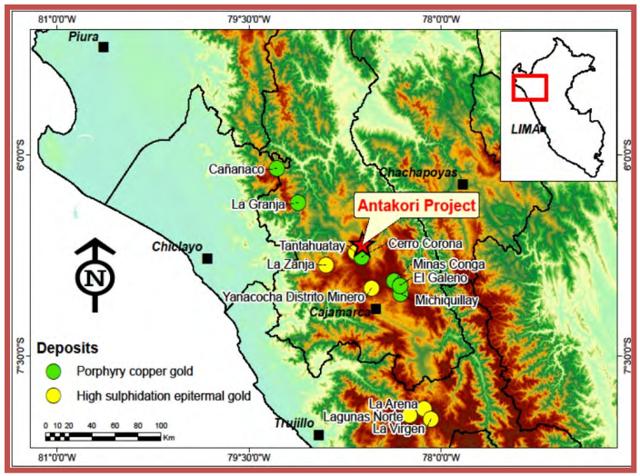 AntaKori is adjacent to the Tantahuatay gold project of Buenaventura (BVN) and Regulus is in the middle of a drilling campaign in collaboration with the latter: 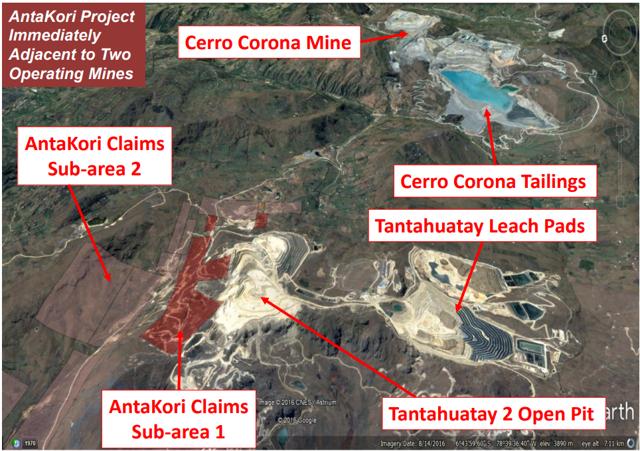 Tantahuatay produce 173,192 ounces of gold in 2018 and it's difficult for either Buenaventura or Regulus to proceed with exploration without mutual agreements.

AntaKori has a mineral resource of 5.1 billion pounds of copper equivalent, and I think that the project has a good exploration potential:

Regulus plans to release an updated resource estimate in February 2019.

I think that Manono is the best undeveloped lithium project in the world and each new batch of drill results has been delivering more and more large and high-grade interceptions. I like the project's size, grade strip ratio, abundance of tin as well as the low volume of ferric oxide, which can be a potentially deleterious element. The initial capex looks modest and Manono has been attracting a lot of interest from China. My main concern is that the project is located in the DRC, which isn’t known for its stability.

Kiena looks great and it has already grown to over half a million ounces of gold in the measured and indicated category. However, it’s not Wesdome main project (the Eagle River gold project is) and I think that the company looks overvalued. Its reserves are running low (just over 500,000 ounces of gold) and costs are high (guidance for AISC of over $1,000 per ounce in 2018) and I prefer to stay away from its shares for now.

AntaKori is located next to the Tantahuatay gold project of Buenaventura and recent drill results from the project have been impressive. The project is large and the infrastructure around it is good, and I think that a lot of synergies could be realized through a combination with Tantahuatay or any of the other nearby projects. The current market capitalization of Regulus is C$155 million but I think it’s deserved as AntaKori has a lot going for it. The company isn’t listed on any US stock exchange, so if you’ll have to go to the TSX if you want to buy shares.

Follow Gold Panda and get email alerts
+
Add a comment
Disagree with this article? Submit your own.
To report a factual error in this article, click here.
Your feedback matters to us!