The gold market has been moving higher since reaching a low at $1161.70 in mid-August. The yellow metal moved above the $1300 per ounce level in early 2019, and after a brief correction that took the price of April futures to a low at $1281.50 on January 24, the price quickly turned higher and reached a new peak at $1331.10 on the final day of last month.

The most recent Fed meeting was good news for the gold market. A more "patient" central bank when it comes to rate hikes will likely keep a lid on the dollar. At the same time, rising interest rates increased the opportunity cost of holding the yellow metal which must compete with other assets that offer a yield.

When gold rallies, the greatest beneficiaries are the miners who invest massive amounts of capital in what amounts to a hole in the ground. Each dollar that gold moves higher increases their earnings. As the price of the metal rises, producers can pull higher cost metal from their properties as production cost that is below the market price equals profits. Therefore, the gold producers of the world are highly-leveraged to the price of the precious metal. These days, with gold moving to the upside and making higher lows and higher highs, the prospects for the gold mining companies are looking the best in years.

The VanEck Vectors Gold Miners ETF (NYSEARCA:GDX) and the VanEck Vectors Junior Gold Miners ETF (GDXJ) are baskets of gold mining stocks. The GDX represents the leading gold mining companies, while GDXJ reflects the smaller cap companies with more leverage. During a bull market in gold, GDX tends to outperform the price action in the metal on a percentage basis while GDXJ often outperforms both gold and the GDX.

Gold over $1300 means lots of profits for the miners

The trend in the gold market has been bullish as the yellow metal has made higher lows and higher highs over the past six months.

As the daily chart of the active month April COMEX futures contract shows, the price has moved steadily higher from a low at $1182.70 on August 16 the day after the dollar index made a new high. In a sign of strength, even though the dollar moved to higher levels over the months that followed, gold never revisited its mid-August bottom.

The most recent peak came on January 31 at $1331.10 per ounce, a rise of over 12.5%. Gold pulled back to the $1318 level as of February 8 on the back of dollar strength. Moreover, gold had risen to a level that was in an overbought condition on the short-term chart, so the decline could be a short-term phenomenon to wash some of the weak speculative longs from the market.

Open interest at 476,635 contracts as of February 7 is not at a level that should ring any alarm bells as the market is not overly long or short at the current price level.

Gold is back over the $1300 level, and that is good news for the gold miners who are making more money for the metal they extract from the crust of the earth. It is also good news for their share prices as money is likely to continue to flow into those companies as investors seem to have a new appreciation for gold in the current environment.

Gold mining equities faced a troublesome time in the stock market from October through Christmas Eve. Over that period, the S&P 500 E-Mini futures contract fell like a stone.

As the weekly chart illustrates, the E-Mini declined from 2,944.75 to a low at 2,316.75 or 21.3% over the period. Over the same period, the price of gold moved from $1185.80 to $1300.40 on the continuous futures contract or 9.7% higher. While the overall environment in the stock market likely weighed on the prices of gold mining shares over the period as risk-off causes market participants to sell any stock with a symbol, gold mining shares outperformed gold on a percentage basis. Both the major and junior mining companies posted impressive gains as they caught up with the price action in the yellow metal.

The investment seeks to replicate as closely as possible, before fees and expenses, the price and yield performance of the NYSE Arca Gold Miners Index. The fund normally invests at least 80% of its total assets in common stocks and depositary receipts of companies involved in the gold mining industry. The index is a modified market-capitalization weighted index primarily comprised of publicly traded companies involved in the mining for gold and silver. The fund is non-diversified.

The most recent top holdings for GDX include: 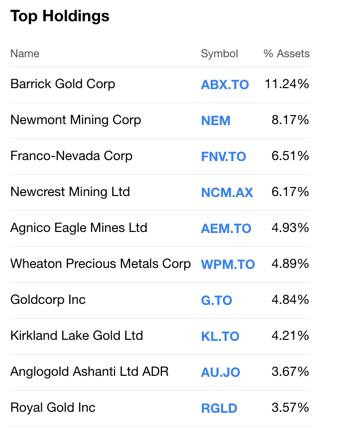 The most recent top holdings of GDXJ include: 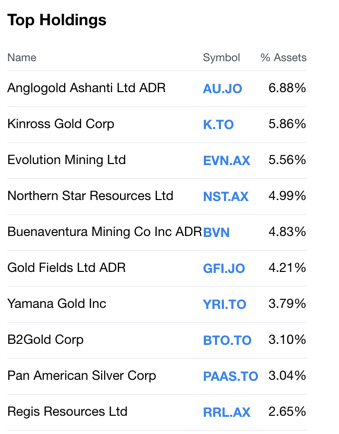 In Q4, GDXJ rose from a low at $27.19 on October 1 to a high at $30.29 at the end of December or 11.5% over the period. While the juniors underperformed the major gold miners, both outperformed the price of gold on a percentage basis.

On dips, NUGT or JNUG for added upside

Both GDX and GDXJ provide a leveraged result compared to gold when the price of the metal is heading higher. Financial innovation has created turbocharged vehicles that amplify the percentage performance of the GDX and GDXJ on a short-term basis. The leverage provided by the Direxion Daily Gold Miners Bull 3X ETF product (NUGT) and the Direxion Daily Junior Gold Miners Bull 3X ETF product (JNUG) which hold derivatives to triple the percentage performance of the GDX and GDXJ comes at a price. These vehicles use options and swaps which mean their values deteriorate over time. Both instruments are highly liquid, but when gold mining shares go sideways, NUGT and JNUG lose value. Both tend to experience reverse splits which can make them dust collectors in a portfolio over time. Timing is the most significant factor when using the triple-leveraged ETF products. From the end of 2018 to when gold shares hit their highs, NUGT moved from $18.64 to $21.34 or 14.5% while JNUG rallied from $9.33 to $11.62 or 24.5%.

All four of the products offer a high level of liquidity to investors and traders, but the selection of which product comes down to a market participant's tolerance for risk. The leveraged products will decline rapidly during price corrections to the downside, and they will decay during quiet markets.

Gold mining shares offer gold bulls more upside than an investment in the metal over the coming weeks and months if the price of the precious metal continues on its path of higher lows and higher highs. Buying these products during short-term corrections tends to offer optimal results.