MannKind (NASDAQ:MNKD) investors have had a bit of a ho-hum beginning to 2019. The stock is stuck in a trading range while the company rolls out new marketing initiatives that investors hope will move the proverbial needle on Afrezza sales.

While there is typically a bit of a slow start to any year with Afrezza scripts, the 2019 start is a bit slower than normal. Part of the issue may well be that the MannKind direct sell program is actually attracting existing users away from paying a higher price for the drug to a program that appears to be a bit of a loss leader. That dynamic is great for diabetics that have a tight budget, but is not so great at assisting the bottom line. The direct sale pricing of as little as $4 per day was initially set up for the first 1,000 to sign up and expired on January 31. MannKind has extended the program through the end of February and still lists that the first 1,000 will get the special pricing.

Script sales for the week ending February 1 came in at a bit above 600. This is well shy of the weekly peak of 757 scripts posted as 2018 closed out. In fact, the last 4 weeks is off pace from the previous 4 weeks by about 12%. Last year the Q1 dip at this stage was a dip of about 3%. 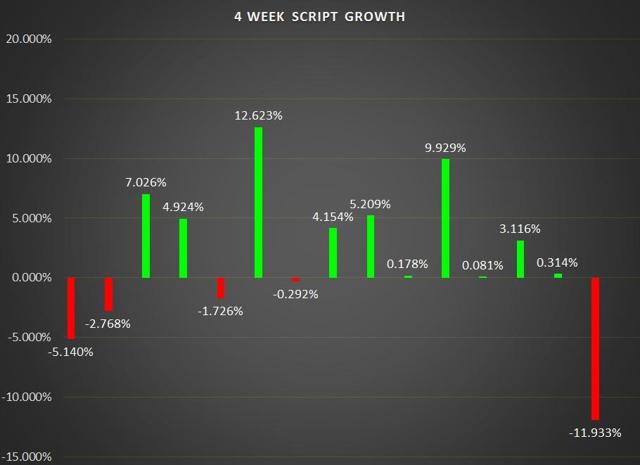 In looking at the 4 week data, the retail sales are showing some improvement. The most recent period is 7% better than the previous 4 weeks. This points to the retail dollars collected seeing a bit of an uptick here at the beginning of the year. 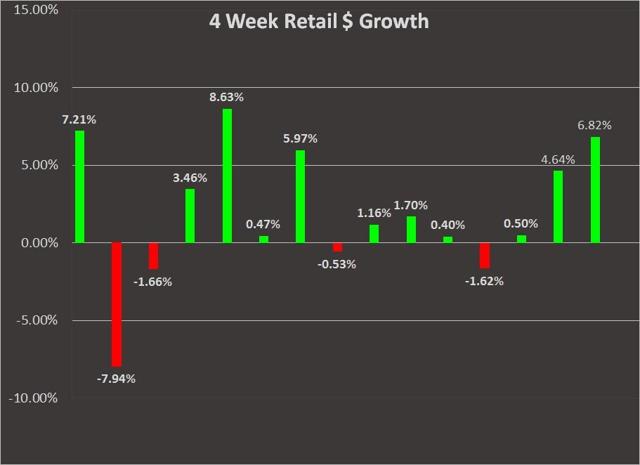 The rolling 4 week average retail has seen a bit of a climb here in 2019. Some of this may have to do with the mix in packaging, or it could be that retailers have raised the price of Afrezza slightly. After seeing the rolling average hover between $1,300 and $1,400 per reported script for most of 2018, we are now seeing the retail numbers trend between $1,450 and $1,550 so far this year. 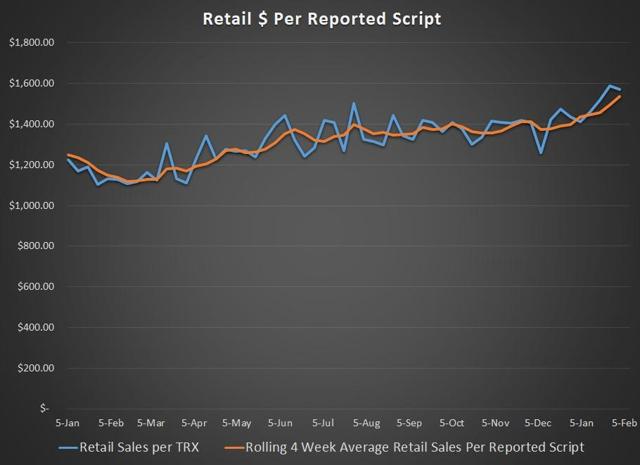 In looking at the mix of scripts, the most recent weeks are showing NRX (new scripts) closing the gap with refills. With any drug there is a point in time when refills are higher than new scripts. That typically comes when a drug has matured and saturated the market. At this stage, with Afrezza, investors want to see NRX higher than refills. It would appear that advertising is assisting in bringing in some new patients, but this dynamic will be worth watching closely. Whether or not the advertising can deliver a decent return on investment is a discussion that will be covered below. For the moment, investors should have tempered enthusiasm about the gap between NRX and refills being closed. 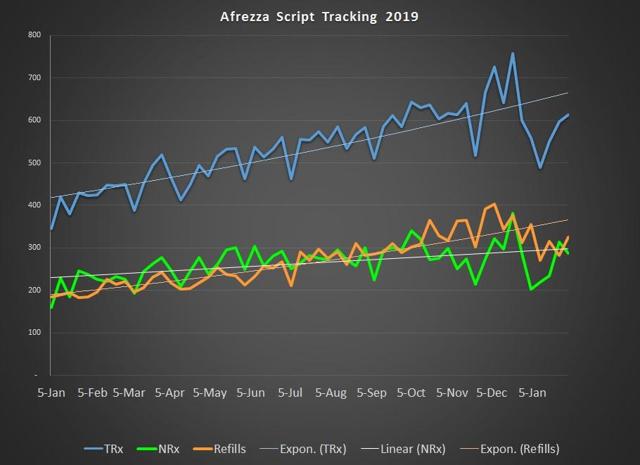 Afrezza script numbers are tracking below my projections. While it is tempting to adjust my model downward, I must consider that the heavier advertising campaign is just getting started. While I believe that the advertising campaign is a positive, I am not convinced that MannKind will be able to run a large enough campaign to move the needle by an amount that the street will truly appreciate. Investors should bear in mind that my projections are rather conservative, and call for sales at a level that is not very thrilling. 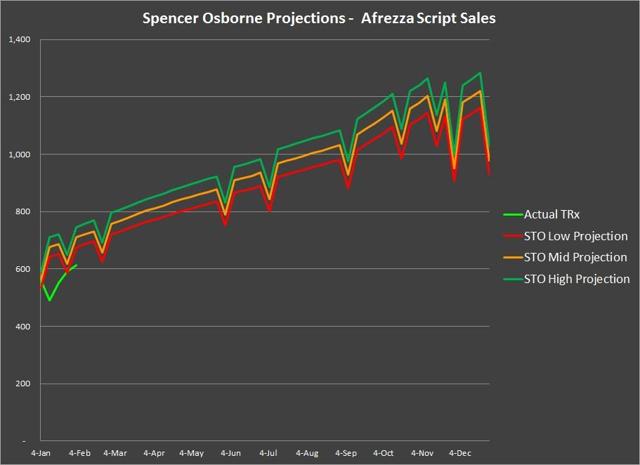 The revenue and cost side is very important to watch. At this stage, I am showing that estimated costs are increasing at a rate greater than estimated net revenue. Investors should bear in mind that I am using costs based on last years action and have not yet included adverting costs in the model. As you can see in the chart below, the costs, retail sales, gross revenue, and net revenue are all tracking within striking distance of my projections. 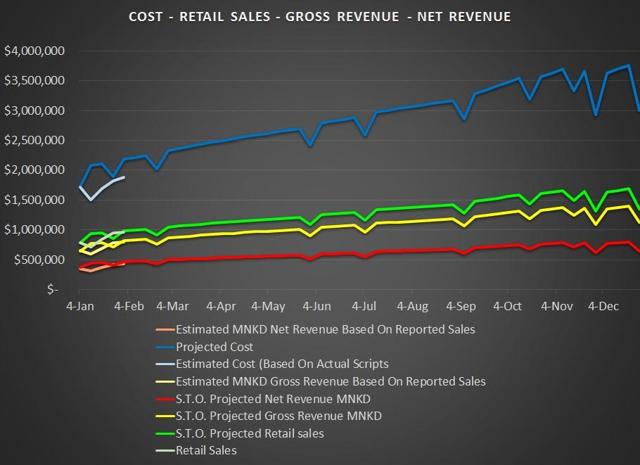 With 5 weeks of data in, I estimate that net revenue stands at about $1.9 million. Almost 10% of the year is now behind us, and net revenue is tracking at about 6% of the $31.5 million I projected. As you can see, sales are already behind the curve. Within a matter of weeks, we should see if the ad campaign can drive sales higher (whether or not it is cost effective). 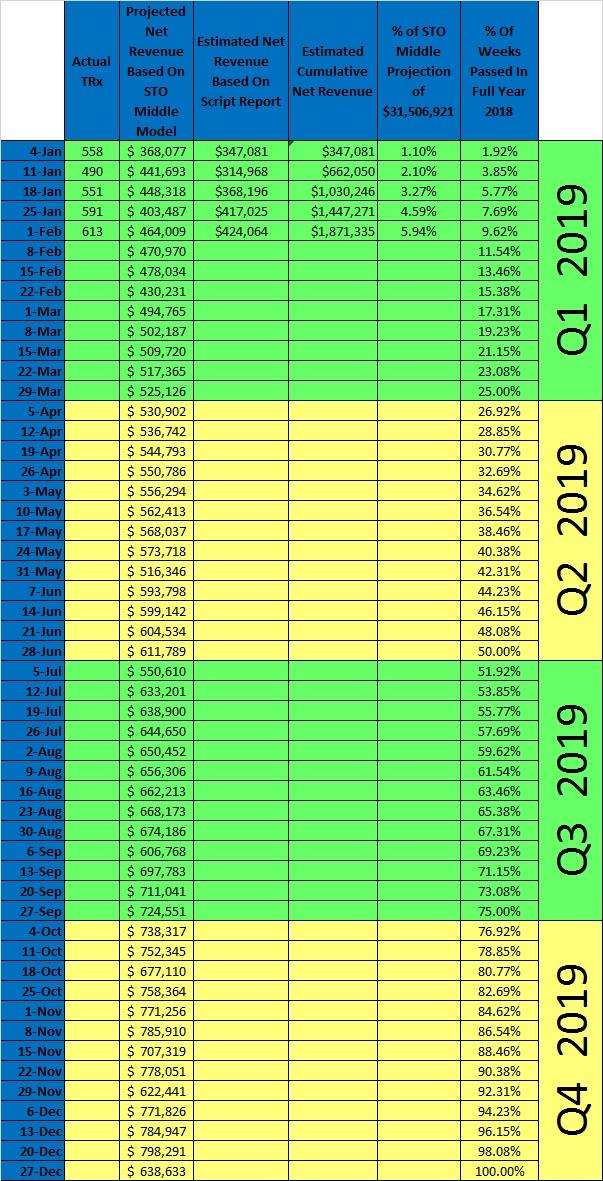 The cash situation at MannKind should be something that investors monitor closely. Historically, when management comes into possession of cash, a bit of a spending spree on hiring and marketing ensues.I estimate that MannKind finished the week of February 1st with about $57 million in cash. Investors should bear in mind that I have not moved the weekly spend number upward to account for advertising. At this stage, with some projected inflows and outflows of cash, the company has enough money to get through Q3. For clarity, I am not saying that the company will go bankrupt in Q3. Tracking cash allows a savvy investor to gauge when cash raising activities may need to happen. 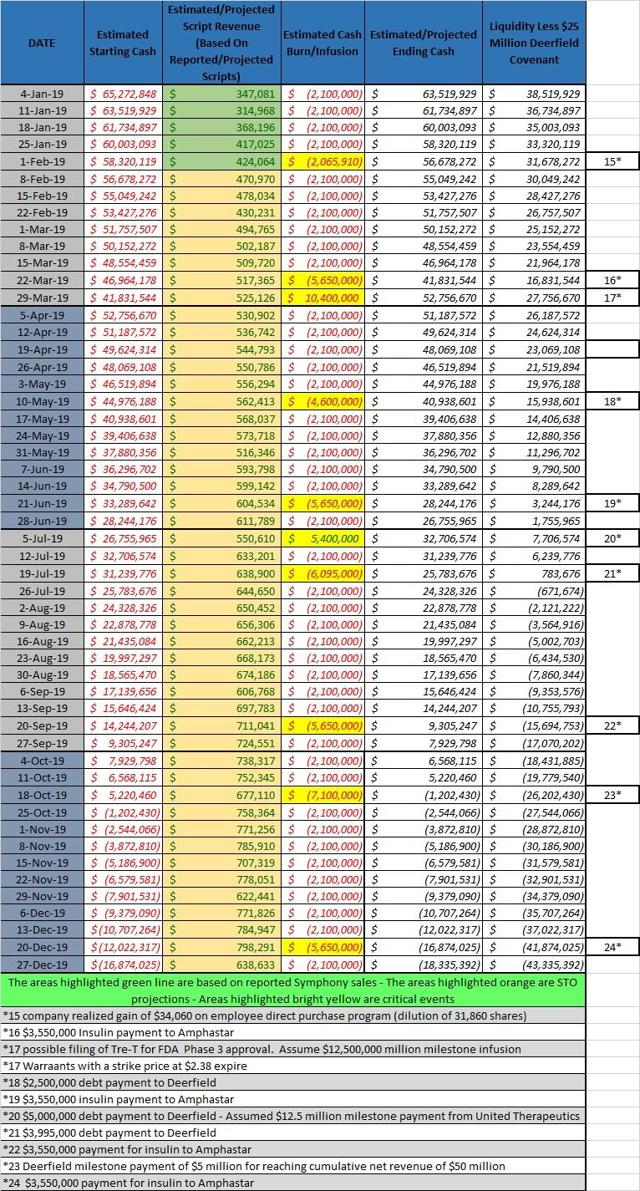 As I have done in the past with other equities, I track advertising on iSpot.tv. The service can give a lot of granularity on the number of ads run, estimated spend, and where the current campaign compares to other campaigns.

In general terms, I use $2,000 per ad run as the cost side of the equation. This week there were slightly fewer ads run than the week prior. The ad campaign launched in earnest on January 14. Unlike scripts data (which trails by a week), ads are more real time. I estimate that the company has spent about $2.2 million thus far on the campaign with the two most recent weeks seeing a spend of just over $700,000.

If we run some quick math, $700,000 per week would equate to a spend rate of just over $9 million per quarter. In my opinion MannKind can not maintain that rate of spend with its cash situation being what it is. This boils down to an ad run rate that will likely be no more than 350 airings per week, and most likely will run at a lower rate of about 200. As savvy readers can see, the advertising spend is outpacing the net revenue realization by a pretty wide margin. 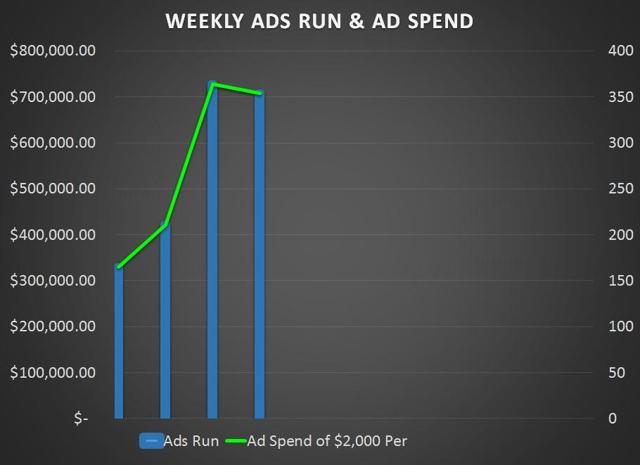 Chart Source - Spencer Osborne (based in part on iSpot data)

Insurance coverage seems to have taken on a life of its own. I received several emails about improved coverage with specific plans and in specific states. While these improvements are positives, I always suggest looking at the overall picture.

At the beginning of 2018 the insurance dynamic looked like this: 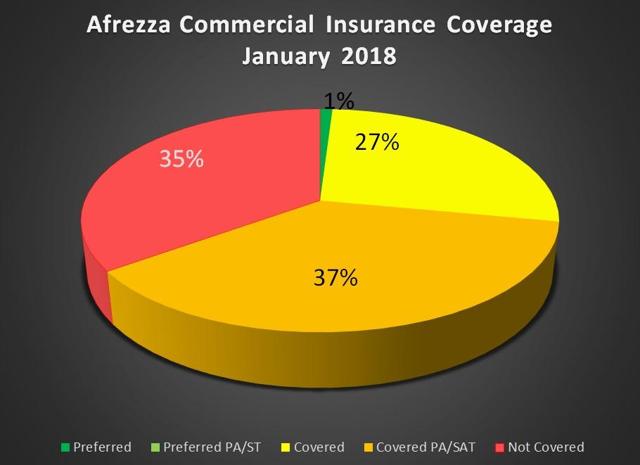 Back in May of 2018 we saw a big shift in insurance coverage. At that time the insurance picture looked like this: 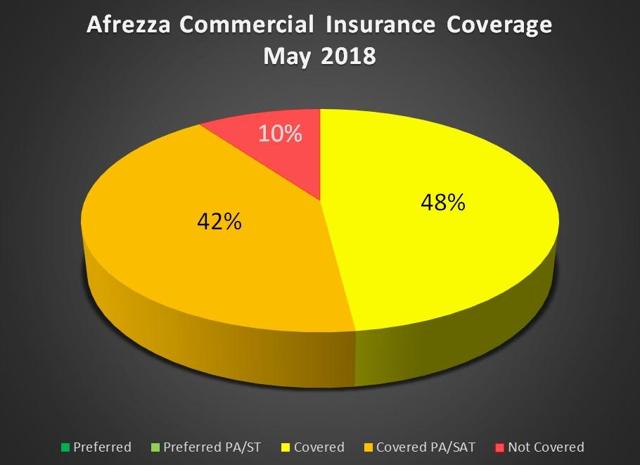 The most recent insurance coverage chart looks like this: 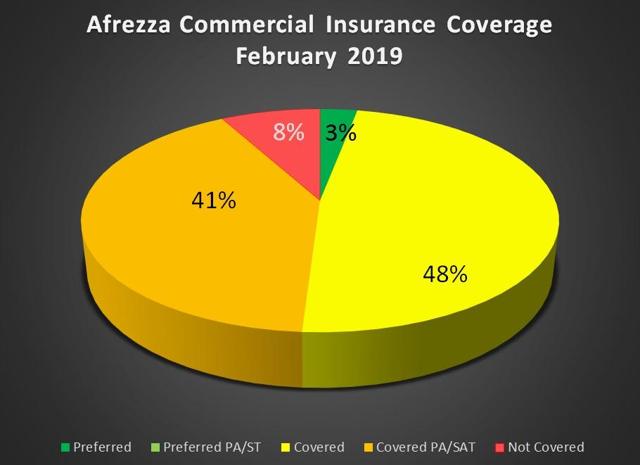 In essence, the bulk of shift in the insurance dynamic transpired about 9 months ago. The recent shift that seems to have quite a few people excited in much more modest. It is indeed a bit better, but the bulk of coverage remains very similar. One huge issue with getting improved insurance is the competitive landscape. Bigger players can discount costs and still make a profit. The price point and cost of Afrezza do not allow MannKind that same luxury. The method by which investors can track the subsidies is no longer available. MannKind used to break these numbers out in quarterly filings, but as of Q3 of 2018, the company now lumps rebates and subsidies in with other metrics. The bottom line is that making meaningful progress on insurance is a very difficult road for this company and may come at the cost of the bottom line. Investors would be wise to be aware of that.

Mannkind remains in a trading range due to its slower than needed sales pace, faster than needed spending pace, and a cash situation that remains much less than ideal to drive growth. In the midst of these challenges, the company is attempting to really push Afrezza when what it may need to do is push the pipeline. More than one follower of this equity has noted that it is pretty much do or die time for Afrezza. The diabetes drug has been a drag on the bottom line for years now, and no thing the company has done has improved the situation much. In fact, in 2018 the costs associated with Afrezza rose at a rate higher than the net revenue. If MannKind had a few h8undred million to work with, it could drive both Afrezza and the pipeline. MannKind does not have the funds to drive both vehicles. Look for this stock to remain range bound until there is greater clarity on pipeline and whether or not this marketing attempt will work. Stay Tuned!

Spencer Osborne
4.13K Followers
Spencer Osborne assesses equities in a data supported realistic manner that is often missing in analysis that the average retail investor receives. His analysis is what investors NEED to hear rather than what they WANT to hear. He believes that the foundation of an equity price is based on what is probable rather than what is possible, and the trade focuses on possible near term catalysts and news. Smart investing is understanding how the market works and how that market mentality impacts a given equity. Spencer believes that investors should model their expectations and maintain a critical eye on whether those expectations are being met. If an invesor finds herself making excuses for missing the mark, then they are losing objectivity.
Follow