Welcome to the another vortex edition of Natural Gas Daily? 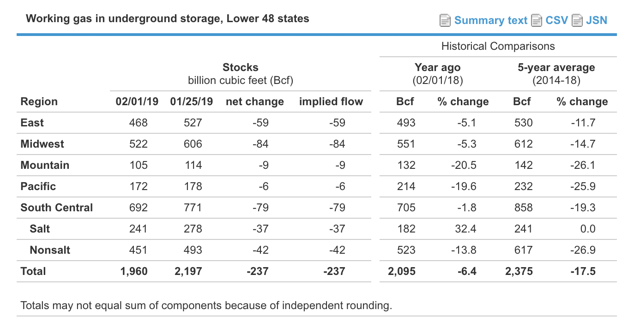 After getting stopped out of our original long position from Wednesday, we initiated another long position yesterday after the ECMWF-EPS 12z.

Another polar vortex in the making?

And that is the risk of another polar vortex hitting the demand regions in the US. You can see in the 15-day cluster above the dark blue blob that's concentrated just outside of the Northeast. Now you can see the difference between the two forecasts above. The chart on the left is not as bullish as the chart on the right because of the Southeast ridge. The latest ECMWF-EPS long-range model shows the Southeast ridge to remain, but the Northeast is still expected to be significantly colder than normal.

On a heating demand basis, the last week of February could show heating demand to be ~20% higher than the 30-year average. Although storage draws naturally decline going forward, we think the market is not discounting this risk properly. But like with all things weather, the models could change overnight and what not, so it's important to stay vigilant on the updates.

So far, we are seeing most models confirm a much colder than normal outlook starting Feb 20th, so if the weekend models confirm, we think natural gas prices could march higher.

Another point we want to make is that given where storage is expected to be, March and April contracts are too cheap. Now natural gas prices can remain cheap, so it's important to have a catalyst, which in this case is the latest weather model update. We think March/April should trade between $2.8 to $2.9 and if the outlook improves further over the weekend, then $3+ is back on the table.

For now, we are long and we think the market is over-discounting the risk of another polar vortex hitting the Northeast.

For readers that have found our natural gas articles insightful, we think you should give HFI Research Natural Gas a try. We are now offering a two-week free trial, and we have the largest natural gas trading community on Seeking Alpha. Come and see for yourself.

Disclosure: I am/we are long UGAZ. I wrote this article myself, and it expresses my own opinions. I am not receiving compensation for it (other than from Seeking Alpha). I have no business relationship with any company whose stock is mentioned in this article.