The following chart shows the nominal (red) and inflation-adjusted (blue) trends for median household income in the United States from January 2000 through December 2018, where the newest nominal data point shows up as the first month-over-month dip after a long uninterrupted upward trend that began in December 2017. The inflation-adjusted figures are presented in terms of constant December 2018 U.S. dollars. 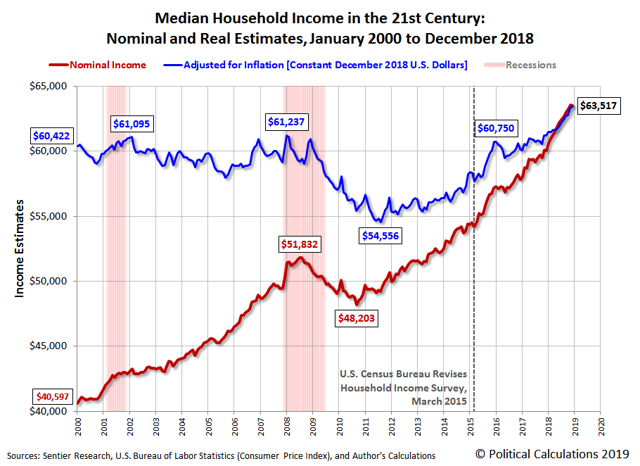 Meanwhile, the year-over-year growth rate of median household income has continued at near record highs. 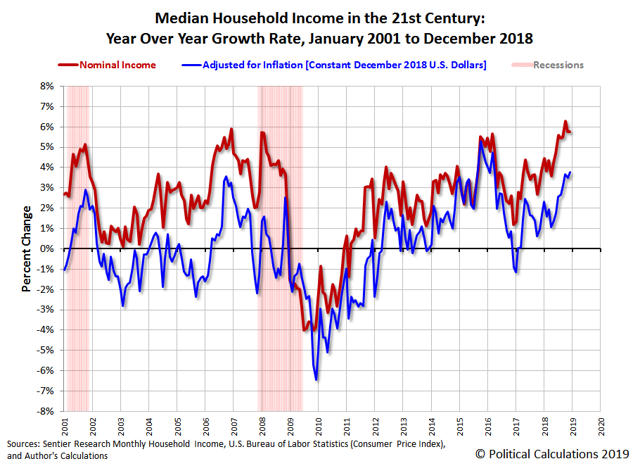 With that final estimate, 2018 proved to be one the best years ever for income gains for typical American households.

The partial government shutdown has impacted our ability to develop an estimate of median household income using our alternate methodology, where the data we use won't be available until 28 February 2019.

In generating inflation-adjusted portion of the Median Household Income in the 21st Century chart and the corresponding year-over-year growth rate chart above, we've used the Consumer Price Index for All Urban Consumers (CPI-U) to adjust the nominal median household income estimates for inflation, so that they are expressed in terms of the U.S. dollars for the month for which we're reporting the newest income data.

Ironman at Political Calculations
2.33K Followers
Ironman is the alias of the blogger at Political Calculations, a site that develops, applies and presents both established and cutting edge theory to the topics of investing, business and economics. We should acknowledge that Ironman is either formerly or currently, and quite possibly, simultaneously employed as some kind of engineer, researcher, analyst, rocket scientist, editor and perhaps as a teacher of some kind or another. The scary thing is that's not even close to being a full list of Ironman's professions and we should potentially acknowledge that Ironman may or may not be one person. We'll leave it to our readers to sort out which Ironman might behind any of the posts that do appear here or comments that appear elsewhere on the web!