Since the days of the Delphic Oracle, it is in human nature to try to predict the future. I, for one, concede it is a difficult skill! At the end of 2017, I optimistically predicted that 2018 could be a good year for active funds. It has turned out to be a very testing one indeed - for mutual funds across the board and active funds in particular.

The thesis is that, typically, late-cycle environments precede a rotation out of momentum-biased ETFs and the increasingly expensive large-cap stocks in which they invest, providing fertile ground for active stock pickers.

However, quantitative easing and tightening has been distorting the market cycle considerably. Judging where we are in a "normal" market cycle is more art than science, but the complexity today is incalculable. The sudden shift in volatility which started in February 2018 hasn't precipitated, as yet, a sustained structural shift in momentum.

Whilst 2017 was a record-breaking year for pan-European fund flows, with Lipper data showing €760 billion of estimated net inflows, 2018 was dire. Outflows of €129.2 billion represent the first after six consecutive years of net inflows. 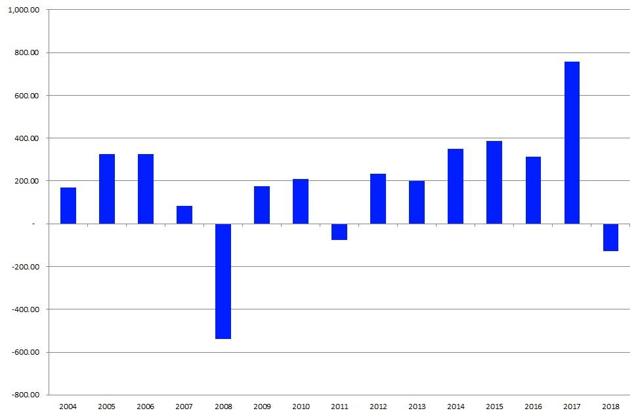 In terms of relative performance for 2018, passive vehicles secured a comprehensive victory over their active counterparts as the graphs below reveal.

In the Lipper Europe ex-UK classification, the figure was slightly higher, with 14% of active funds beating the highest ranked broad-based tracker fund in the same classification.

Longer periods improve the numbers, but not by much

When it comes to performance comparisons, it is important to consider the "opportunity cost" of not investing in an active fund (i.e., the potential outperformance of a fund over an index). Often this can be considerable.

The orange bars in each of the graphs show this. For example, in the five years to the end of 2018, the best-performing active fund in the Lipper UK Equities classification outperformed the highest ranking broad-based tracker by nearly 37 percentage points - a considerable outperformance for investors in that fund.

A tough market for all - especially active

2018 was undoubtedly difficult for fund managers and investors alike. Further volatility, geopolitical uncertainty, and central bank influence will likely throw more curveballs for the market, but I remain an advocate of active funds.

We may soon enter a period which may be more conducive for active funds in aggregate but concede there is much room for improvement in 2019, and I will not be making any Oracle-like predictions this year.

Lipper Alpha Insight
2.32K Followers
Lipper Alpha Insight (https://lipperalpha.refinitiv.com/) is a free daily news and commentary blog, giving financial professionals actionable ideas and insight to make sense of individual security news and events and stay on top of macroeconomic trends. We have a team of expert analysts that are constantly looking at the financial landscape in order to keep you up to date on the latest movements.
Follow
To ensure this doesn’t happen in the future, please enable Javascript and cookies in your browser.
Is this happening to you frequently? Please report it on our feedback forum.
If you have an ad-blocker enabled you may be blocked from proceeding. Please disable your ad-blocker and refresh.