Since 2015, I have been less than enthusiastic about risk assets. And while I do not short the market, nor have I ever been completely divested from equities, investors have been rewarded for “going long.”

Nevertheless, a review of the previous four years must note the 22 months of sideways stock movement that preceded the November 2016 election. The assessment must also account for the calendar year losses in 2018, especially for smaller-cap equities and foreign equities. 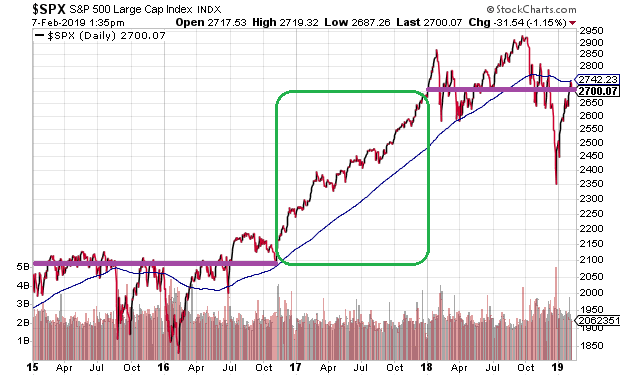 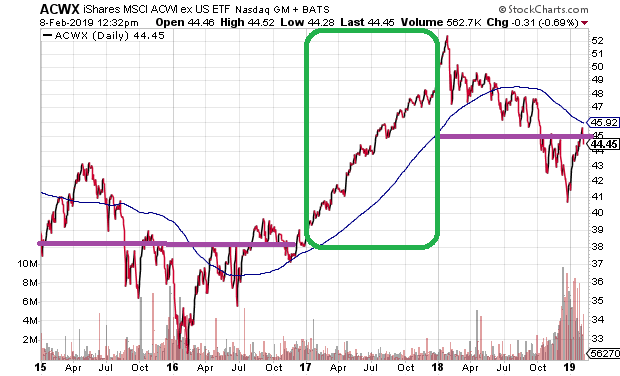 The reason that I am focusing on the last four years? The start of 2015 is when I shifted the tone of my commentary.

From the start of 2009 through the end of 2014, I expressed “bullishness” on everything from attractive stock valuations to unconventional monetary stimulus. Faultfinders routinely grumbled that I did not present enough balance in my articles. Many derided that I was a “perma-bull.”

Since 2015, however, I have expressed “bearishness” on everything from stock overvaluation to the end of quantitative easing to weakness in the global economy. Critics regularly complain that I do not highlight enough positives in my assessments. Several scoff that I am a “perma-bear.” 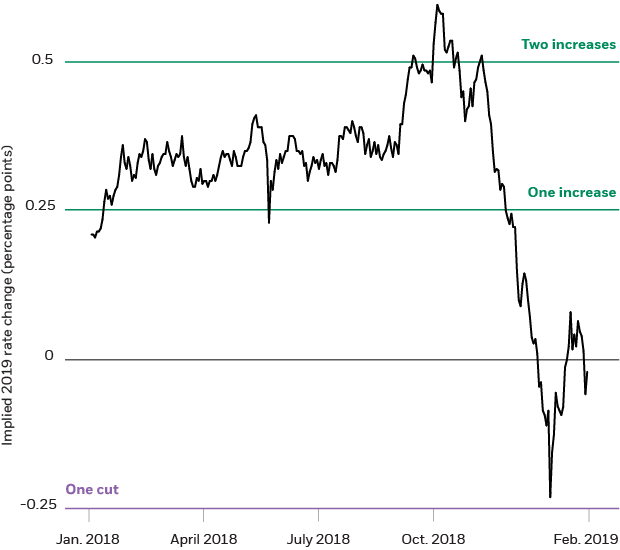 How does this rapid-fire change in monetary policy expectations mesh with the notion that the U.S. economy is dandy? Keep in mind, the Federal Reserve was anticipating two to four rate hikes as recently as October. They’ve completely caved on the idea.

Clearly, the Federal Reserve will continue to bow to the whims of investors in an effort to reduce the likelihood of a reverse wealth effect. On the other hand, the track record for the Federal Reserve in preventing recessionary pressures and/or eradicating severe losses for riskier assets has been poor. 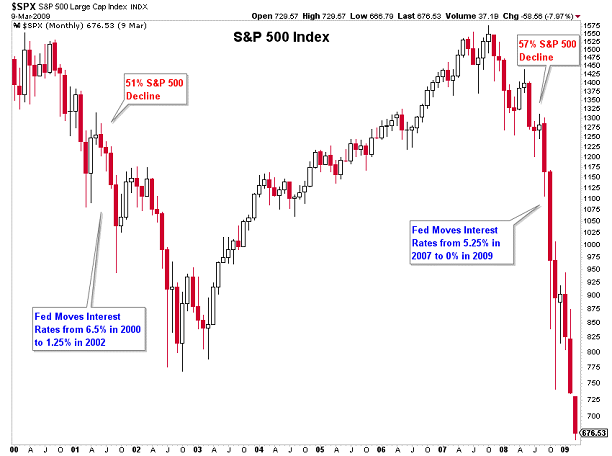 1.Dramatic Fed Shift From Tightening to Neutrality. Even before the monstrous 19.9% downturn in the S&P 500 in the 4th quarter of 2018, I frequently posted a Fed Funds rate chart. (See below.) In essence, the shift from tightening to attaining a neutral level buys a bit of time. 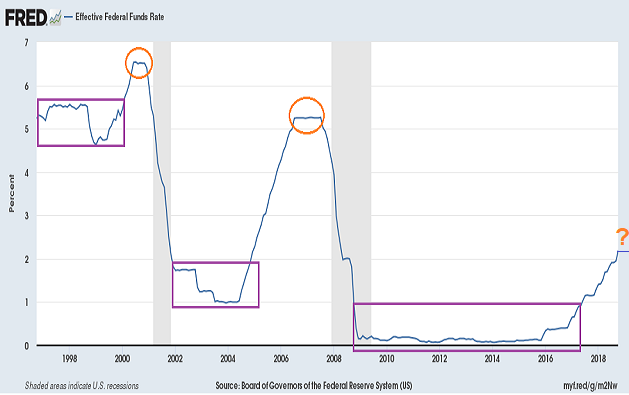 With the overnight Fed Funds rate target at 2.25%-2.5% target, and the 10-year not much higher, the Fed is unlikely to raise rates again in this credit cycle. They’d be lucky to stay at neutral for an extended period.

We are already looking at a yield curve where inversions have occurred at various points between the 30-year Treasury and the Fed Funds overnight lending rate. Previous percent of inversions at the 40% level witnessed recessions occurring within 12-15 months. 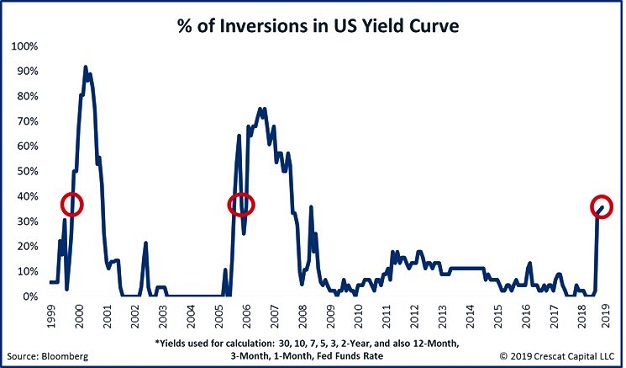 2. Peak Economic Well-Being Showing Sings Of Wear-N-Tear. Those who disagree with my analysis often point to the low rate of unemployment. They conclude, “We couldn’t be any further from an economy that is about to contract.” 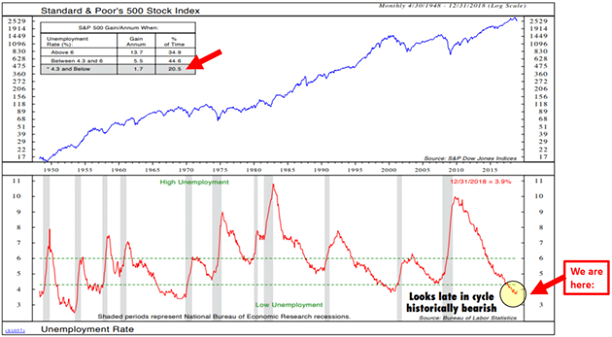 There’s another way to view the economy, and that is through the eyes of small businesses. They are the engines of vibrant growth and well-being.

From my vantage point, economic optimism on the part of small firms has largely depended upon stimulus. That could come from central bank efforts to increase lending via low borrowing costs as well as access to that credit. It could also come from fiscal stimulus in the form of tax breaks. 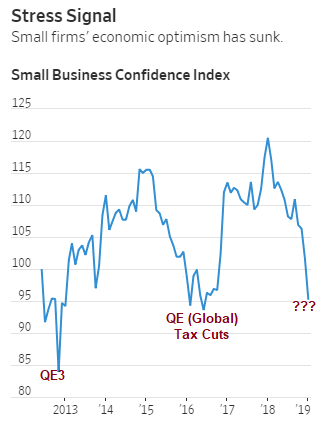 What we see lately is that small business confidence has taken a rather big hit. And while the Fed has pulled back on its intent to tighten, the “new neutrality” is nothing like the third iteration of quantitative easing (QE3) in 2012. For that matter, it is nothing like the worldwide coordinated effort to expand balance sheet purchases or the tax reform hopes that sent confidence soaring alongside the November 2016 election.

3. Withering Earnings/Revenue and Ongoing Overvaluation. It is not that earnings have been altogether terrible. Still, according the Deutsche Bank’s equity strategists, S&P 500 corporations are barely beating consensus estimates. The beat rate is the lowest since Q4 of 2011. Meanwhile, sales fell below the average beat rate for the previous four quarters. 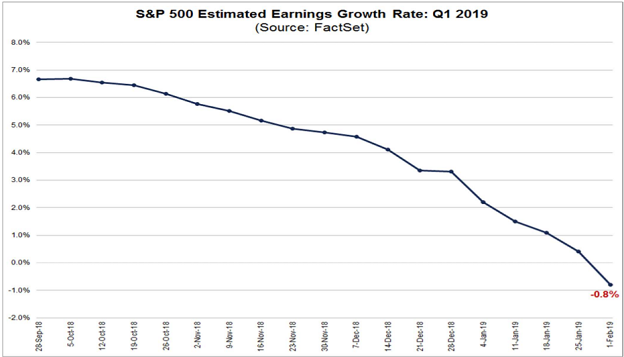 Moreover, the notion that the 2018 sell-off is serving up more attractive valuations is misleading. On measures most closely correlated with subsequent forward returns (e.g., market-cap-to-GDP, price-to-sales, Tobin’s Q, etc.), S&P 500 stock assets are still incredibly oversubscribed. Only the 2000 peak for market-cap-to-GDP is more egregious than right now. Indeed, one might recall that Warren Buffett described the indicator as the “best single measure of where valuations stand at any given moment” (2001). 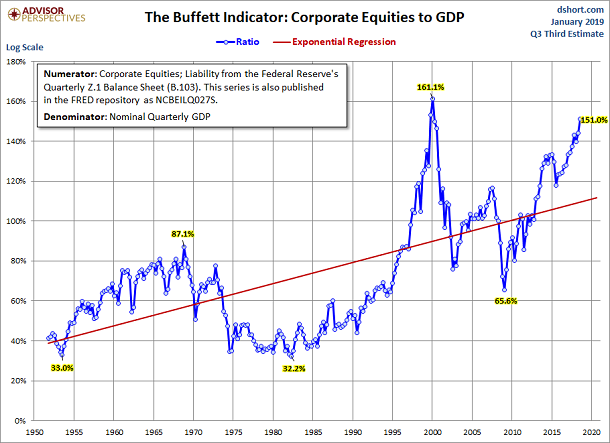 Valuation levels hardly look better when combining indicators with some of the strongest correlations with future returns. From regression to Crestmont to the Q Ratio to CAPE PE/10, the average valuation level has only dropped slightly from the three-standard-deviation overvaluation level reached late last year.

Is 96% overvaluation genuinely reassuring now? When it remains higher than 1929 and 2007? When investing icon Jack Bogle of Vanguard fame opined, “Reversion to the mean is the iron rule of the financial markets.” (Note: If stock valuations were cut in half, prices would likely need to fall 33%-40% during a period of earnings contraction.) 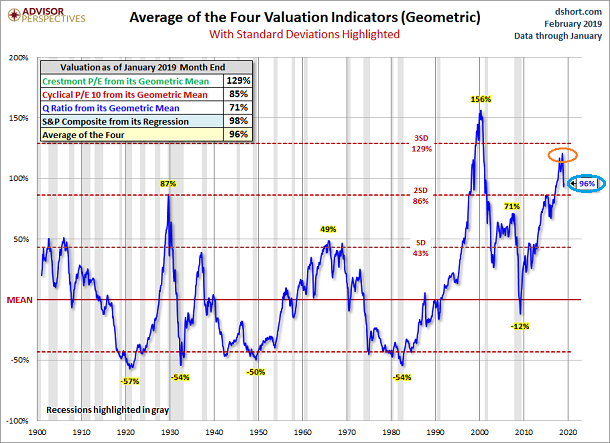 I may be wrong about selecting less risky assets for the current market environment. Back in December, for example, I talked about using high quality preferreds like Stanley Black & Decker, Inc. 5.75% Junior Subordinated Debenture due 2052 (SWJ) and high quality convertibles like Cheniere Energy 2045 (Coupon 4.25% Cusip 16411RAG4). From my vantage point, the risk-reward relationship for these securities is better than for the overall U.S. equity market.

That does not mean I have abandoned common stock risk entirely. A large number of our near-retiree and retiree client base have 35%-50% equity as opposed to our top target of 55%-70%. We simply have more confidence in high quality preferreds and high quality convertibles in rounding out the risk asset exposure.

Perhaps this makes me a bear. Perhaps not. Either way, I’m going to have an old friend for dinner and a nice Chianti.

Gary Gordon
31.01K Followers
Gary A. Gordon, MS, CFP is the president of Pacific Park Financial, Inc., a Registered Investment Adviser with the SEC. He has 30 years of experience as a personal coach in “money matters,” including risk assessment, small business development and portfolio management. He favors tactical asset allocation strategies over "set-it-and-forget-it" investing.Gary is often asked to consult as an educator. He has taught financial concepts in Mexico, Singapore, Hong Kong, Taiwan and the United States.As a Certified Financial Planner (CFP), Gary has distinguished himself as a reputable and trusted investor advocate. Gary’s participation on local and national radio has spanned more than two decades. He writes commentary at his web log, TheStockBubble.com.
Follow
156 Comments
To ensure this doesn’t happen in the future, please enable Javascript and cookies in your browser.
Is this happening to you frequently? Please report it on our feedback forum.
If you have an ad-blocker enabled you may be blocked from proceeding. Please disable your ad-blocker and refresh.