Note: I have covered Capstone Turbine (CPST) previously, so investors should view this as an update to my earlier articles on the company.

It's been more than two years since my last article on Capstone Turbine was published but very little has changed in the meantime. Despite a series of restructuring efforts, the company continues to underperform investor expectations and burn material amounts of cash.

For example, at the time of my last article in October 2016, the company's cash balance was roughly the same as at the end of calendar year 2018 while debt was lower by approximately $4.5 million. Outstanding shares were just 30.7 milion at that time compared to 71.6 million today as the company continued to raise fresh capital by more or less regularly selling shares into the open market. 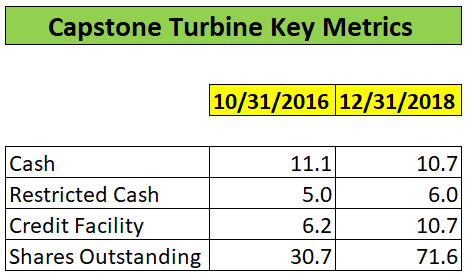 That said, despite ongoing weak financial performance and massive dilution, the stock price has held up reasonably well and was trading just slightly below the levels around the time of my last article until the company's Q3/FY19 report hit on Thursday.

As usual, the quarter was nothing to write home about with revenues missing estimates by a wide margin and another 3.9 million shares being issued under the company's ongoing at-the-market offering program. On the flipside, the company successfully managed to reduce cash burn during the quarter and reported an improved book-to-bill ratio of 1.3 albeit in parts helped by weaker than expected billings during the quarter. 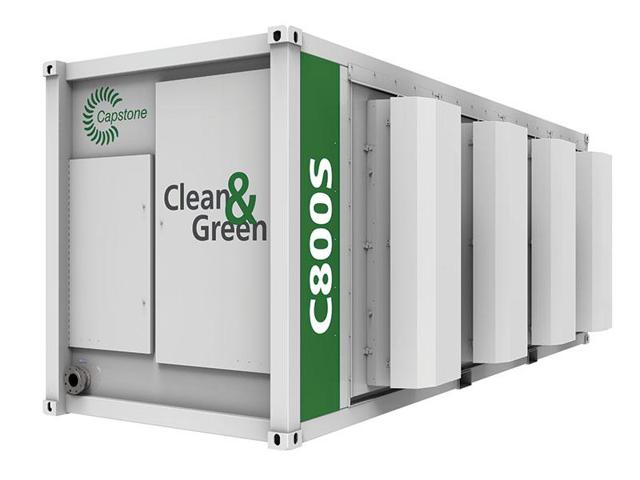 As business remains heavily weighted towards the oil and gas markets, the large oil price drop in the final quarter of calendar year 2018 also caused some headwinds.

Subsequent to the end of the third quarter, on February 4, 2019, the company entered into a $30.0 million three-year term note with Goldman Sachs to replace the company’s existing $15.0 million revolving credit facility with Bridge Bank as part of its ongoing goal to support quarterly working capital, cash flow and liquidity, and to strengthen the balance sheet in support of the company’s revenue growth initiatives.

What on the surface looks like a rather bold commitment from a leading Wall Street investment bank to a struggling micro-cap company like Capstone Turbine, upon closer investigation reveals itself as a highly expensive transaction with limited additional liquidity actually provided to the company (emphasis added by me):

As a condition of the Note Purchase Agreement, we have restricted $12.0 million of cash equivalents as additional security for the credit facility. Borrowings under the Notes Purchase Agreement will bear interest at a rate of 13.0% per annum, computed on the basis of a 360-day year composed of twelve 30-day months, and payable quarterly on March 31, June 30, September 30 and December 31 of each year until maturity, subject to increase during the occurrence of an event of default. Obligations under the Note Purchase Agreement are secured by all of our assets, including intellectual property and general intangibles.

After repaying and terminating the company's rather inexpensive $15 million revolving credit facility with Bridge Bank and restricting $12 million as collateral for the new Goldman Sachs note, Capstone Turbine added a mere $9 million in liquidity while at the same time doubling its borrowing rate from 6.5% to a whopping 13.0% p.a. 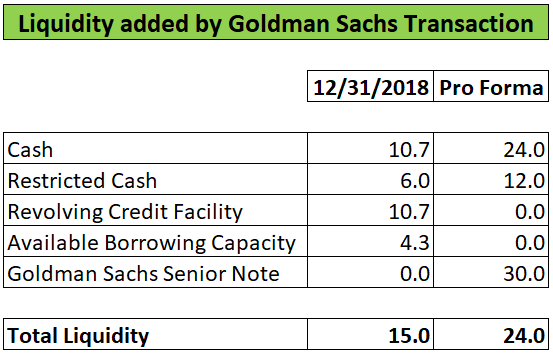 Cash interest expense will move up from approximately $0.6 million to $3.9 million annually, requiring a more than 35% return on invested capital for the added $9 million in liquidity to just pay for the vastly increased interest obligations.

That said, the restricted cash requirement will be reduced to $9 million after one year, providing an additional $3 million in liquidity at that time and the company was granted the right to make voluntary repayments at any time.

In addition, the company will be subject to certain EBITDA covenants, requiring a substantial improvement in the company's results going forward, increasing the risk of a default under the new senior note this way.

Moreover, Goldman Sachs received 5-year warrants to purchase up to 4.05 million shares of the company at an exercise price of $0.8859. The warrants even contain anti-dilution provisions but consideration paid to Capstone Turbine was a mere $150,000.

Lastly, the company will, most likely, have incurred substantial fees in conjunction with the Goldman Sachs transaction but did not file the respective "Fee Letter" referred to in the financing agreement with the SEC.

With $12 million in restricted cash and all of the company's assets pledged as collateral, Goldman Sachs' credit risk is basically zero at this point given that the balance sheet showed accounts receivables and inventories overshooting accounts payable by $16 million at the end of the most recent quarter.

In effect, Goldman Sachs is getting paid handsomely while patiently waiting for Capstone Turbine to either thrive or default under the note agreement. While in the first case, the company would, most likely, replace the senior note with less expensive debt as soon as possible, Goldman Sachs would be more than compensated by the increasing value of its warrants.

In case of a default under the senior note, Goldman Sachs would have already earned a decent amount of interest and would be the first in line to get paid should the company chose to initiate chapter 11 proceedings.

In addition, the company has recently entered into an expensive $30 million financing transaction with Goldman Sachs that will cause annual cash interest expense to increase more than sixfold from current levels while only providing a limited amount of additional liquidity.

Without a miraculous recovery in the company's business, Capstone Turbine will face serious challenges to perform under the new debt. Investors should prepare for the company to restart selling equity into the open market to cover the hefty interest payment obligations in the not too distant future.

In fact, the onerous transaction terms might very well cause the company to end up in bankruptcy protection going forward.

Investors should also keep in mind that the company remains out of compliance with the Nasdaq's minimum bid price requirement and has been provided the usual 180 calendar day grace period to cure the deficiency. The company will require shareholder approval for another reverse split but given the issues discussed above, this course of action looks very likely.

Against this backdrop, investors should remain at the sidelines or exit existing positions as the company's future looks more cloudy than ever before.

Henrik Alex
13.53K Followers
I am mostly a trader engaging in both long and short bets intraday and occasionally over the short- to medium term. My historical focus has been mostly on tech stocks but over the past couple of years I have also started broad coverage of the offshore drilling and supply industry as well as the shipping industry in general (tankers, containers, drybulk). In addition, I am having a close eye on the still nascent fuel cell industry.I am located in Germany and have worked quite some time as an auditor for PricewaterhouseCoopers before becoming a daytrader almost 20 years ago. During this time, I managed to successfully maneuver the burst of the dotcom bubble and the aftermath of the world trade center attacks as well as the subprime crisis.Despite not being a native speaker, I always try to deliver high quality research at no charge to followers and the entire Seeking Alpha community.
Follow