Concern that no trade deal between the US and China may be struck ahead of the March 1 trade truce deadline means only one thing in currency terms - a stronger dollar.

Possibility of no deal boosting the USD

It's hard to spot against the EUR, but against the CNY and KRW, the recent playing down of optimism about a trade deal between the US and China is playing out, as it should, through a stronger USD (weaker Asian FX).

This could become more evident if recent hesitancy about the progress made towards a deal grows, and yes, the CNY and KRW are the two currencies that will probably see the greatest impact: CNY because, well, this is all about China. And the KRW because it is the regional trading powerhouse and liquid currency.

This is playing out in a modified version of what we imagined would be the case at the beginning of the year, except that we felt that there would be some semblance of a positive announcement first, before everything fell apart. This could still happen, in which case, there could become final modest relief rally in Asian FX and in particular, the CNY and KRW, before the USD comes crawling back through late 1Q19 / 2Q19. Something to keep watching!

Governor Lowe admitted yesterday what we have been saying for some time now, and bank bill futures markets recently began to echo: Namely, that there is two-way risk around Australian rates, and that the next move, whichever direction it is, would be some way off. We concur with all of that. Today's monetary policy statement will merely repeat this message, with some bells and whistles.

The AUD is looking weaker again, as it should if trade worries are well founded. But it probably won't lose much further ground on today's statement. This is becoming old news now. But we still like an AUD/USD sub-0.70 figure in the near-term. The trade story might deliver it before a weaker domestic demand story in Australia does.

Nothing much wrong with Japan's wages...

...but where is the spending?

Japan's wage growth became one of Abe's main targets during his Abenomics project, about which we hear relatively little these days. And we have to say that on this, he has actually managed to pull off quite a victory. Wages growth, for the longest time virtually zero, has picked up since mid-2017 and is now running at a 1.8%YoY pace. Even in real terms, this is 1.4%.

While this is a good result, it should also have spurred some stronger household spending. In contrast, this remains pathetically weak. The latest read of (real) 0.1%YoY is not markedly different from recent years, though perhaps it was in a slight trend decline before, and is now merely flat. It may just take more time for workers to view wage increases as permanent before they spend them, rather than saving them.

But one thing we would suggest, the BoJ's current extension of unorthodox monetary policy probably isn't helping. It may not actually be making things worse (discuss...), but as the increasing rate of Japanese pensioners committing petty crimes to get shelter and food in jail shows, for parts of the population, zero yields are actively hurting. 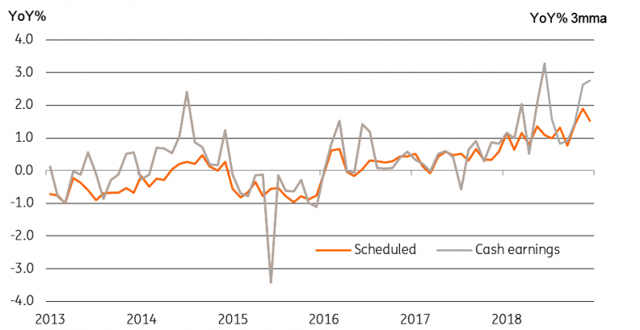 (From Prakash Sakpal) India's central bank (RBI) has ignored the inflationary consequences of their fiscal splurge and eased policy in support of the government's drive to boost growth before the elections. The 25bp 'election cut', a somewhat surprising move (though we did warn about the risks to this last week), was done on the grounds of inflation continuing to be "benign". We aren't expecting inflation is to hit the RBI's 4% policy mid-point anytime soon but we believe the underlying pressure remains upward. As such, we consider the policy move premature and the rupee will be the main victim of such a policy (India: RBI's surprise rate cut appears premature). In separate announcements yesterday, the RBI is also planning to ease restrictions on foreign investment in corporate debt by removing a 20% limit on investment in a single company. Relaxation of guidelines for borrowing for bankruptcies is also in the pipeline. We remain sceptical of these measures bringing any support to the beleaguered currency when the broader investor sentiment is likely to remain fragile.

We also noted last week that there were other central banks in Asia that might also take advantage of 1) a weaker USD and 2) low inflation stemming from low oil prices, to undo some of the arguably unwarranted tightenings from 2018. Bank of Thailand ranks amongst those on our list, as well as the Philippine Central Bank (BSP), and Bank Indonesia (BI) We could even squeeze the Bank of Korea (BoK) on to this list.

Time may be running out though if trade anxiety comes back with force and the USD with it. So this window is open now but is closing. BI meets the week after next...

Content Disclaimer: This publication has been prepared by ING solely for information purposes irrespective of a particular user's means, financial situation or investment objectives. The information does not constitute investment recommendation, and nor is it investment, legal or tax advice or an offer or solicitation to purchase or sell any financial instrument. Read more

ING Economic and Financial Analysis
2.17K Followers
From Trump to trade, FX to Brexit, ING’s global economists have it covered. Go to ING.com/THINK to stay a step ahead. We’re sorry we can’t reply to individuals' comments.Content disclaimer: The information in the publication is not an investment recommendation and it is not investment, legal or tax advice or an offer or solicitation to purchase or sell any financial instrument.This publication has been prepared by ING solely for information purposes without regard to any particular user's investment objectives, financial situation, or means. For our full disclaimer please click here.
Follow
To ensure this doesn’t happen in the future, please enable Javascript and cookies in your browser.
Is this happening to you frequently? Please report it on our feedback forum.
If you have an ad-blocker enabled you may be blocked from proceeding. Please disable your ad-blocker and refresh.