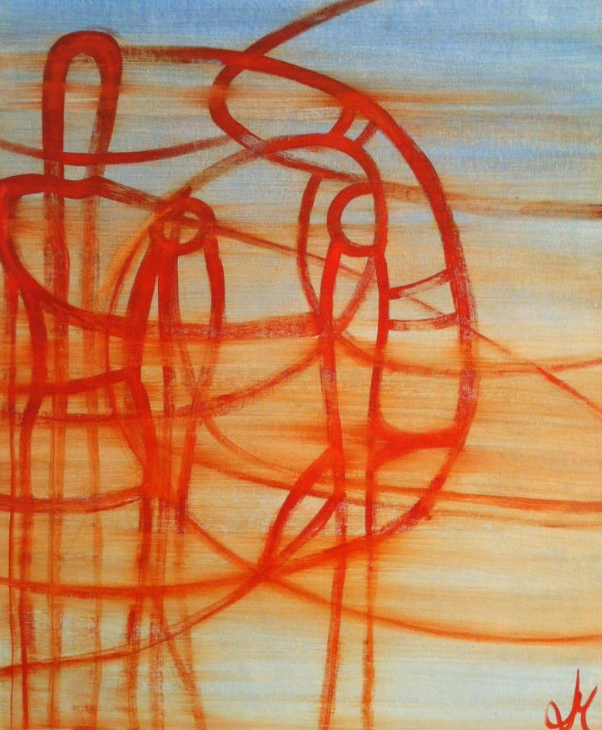 Welcome to my Gold Weekly.

In this report, I wish to discuss mainly my views about the gold market through the World Gold Shares SPDR Gold Minishares Trust ETF (NYSEARCA:GLDM). GLDM is directly impacted by the vagaries of gold spot prices because the fund physically holds gold bars in a London vault in the custody of ICBC Standard Bank.

To do so, I analyse the recent changes in speculative positions on the Comex (based on the CFTC) and ETF holdings (based on Fastmarkets' estimates) in a bid to draw some interpretations about investor and speculator behavior. Then, I discuss my global macro view and the implications for monetary demand for gold. I conclude the report by sharing my trading positioning.

Speculative positions on the Comex

The CFTC statistics are public and free. The CFTC publishes its Commitments of Traders report (COTR) every Friday, which covers data from the week ending the previous Tuesday. In this COTR, I analyze the speculative positioning, that is, the positions held by the speculative community, called "non-commercials" in the legacy COTR, which tracks data from 1986.

As a result, the impact on gold spot prices tends to be relatively more important and volatile, which, in turn, affect the value of GLDM because the latter physically holds the metal in vaults in London and, therefore, has a direct exposure to spot gold prices. 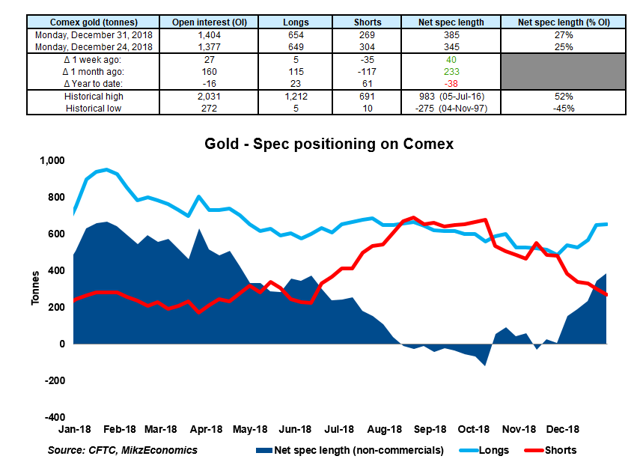 The CFTC released this week Commitments of Traders (COT) data for the period December 24-31, 2018.

While I discussed gold’s spec positioning in details in a recent note (see Gold Spec Positioning Shows A Bullish Setup, February 7), the main points I intend to highlight here are the following:

Against this, I believe that the increase in speculative demand for Comex gold will drive Comex gold spot prices increasingly higher in the near to medium term, and therefore, the value of the World Gold Shares SPDR Gold Minishares Trust ETF should move proportionally higher. 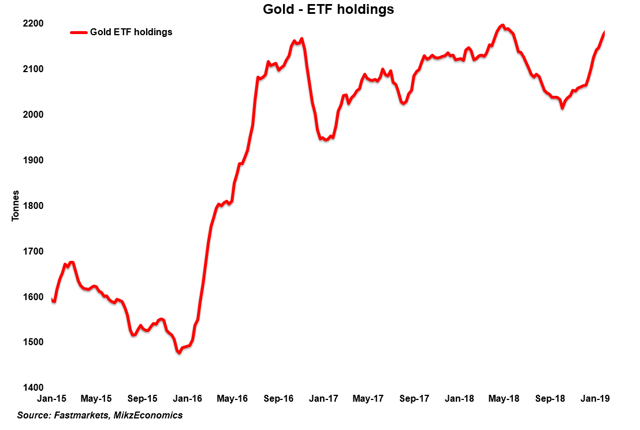 Gold ETF holdings have increased by a robust 57 tonnes or 3% since the start of the year to reach roughly 2,187 tonnes as of February 1, according to Fastmarkets. 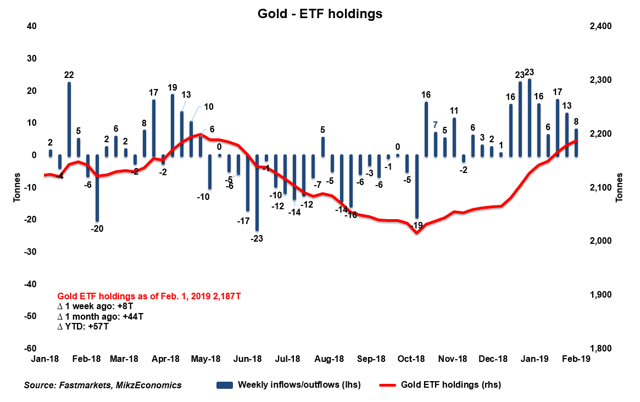 Macro investors are cognizant that the risk rally since the start of the year is unlikely to prove sustainable due to a number of macro/political/geopolitical clouds on the horizon.

As we near the end of the US economic cycle, investors are inclined to position their portfolios in a more defensive way. This explains why the recent rally in US equities has been accompanied with outflows rather than inflows, as Bank of America shows in the chart below. 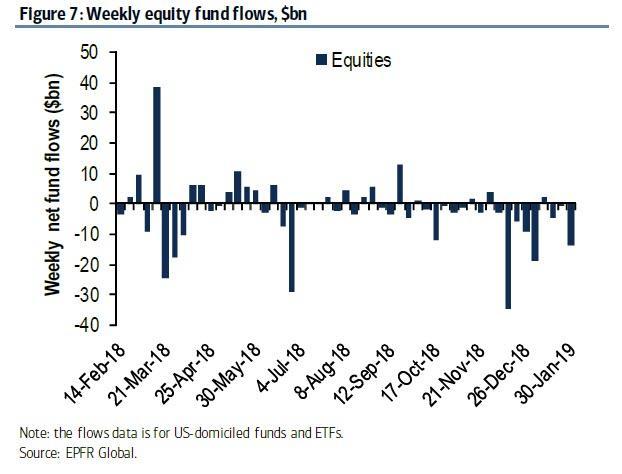 These dynamics should prevail in the coming months, which should result, on net, in a stronger investment demand for gold and other haven assets. 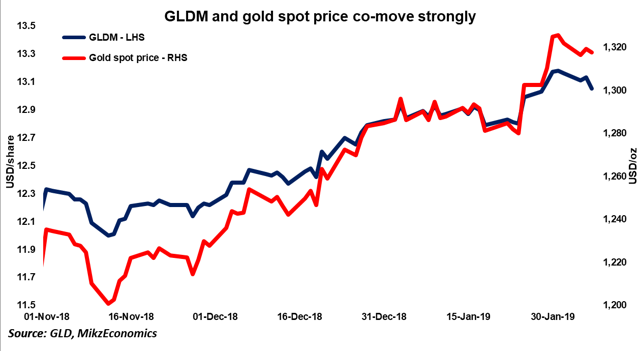 GLDM is directly impacted by the vagaries of gold spot prices because the fund physically holds gold bars in a London vault and custodied by ICBC Standard Bank.

All of the Trust’s physical gold is held by the custodian; namely ICBC Standard Bank, in their London vault except when the gold has been allocated in the vault of a sub-custodian.

In such instances, ICBC Standard Bank has agreed that it will use commercially reasonable efforts to promptly transport the gold from the sub-custodian’s vault to the ICBC Standard’s London vault, at ICBC Standard’s cost and risk.

The Trust has entered into an agreement with ICBC Standard Bank plc, the Trust’s Custodian, which will ensure that all of the Trust’s gold is held in allocated form at the end of each working day.

The investment objective of the fund is to replicate the performance of the price of gold, less trust expenses (0.18%), according to GLDM's factsheet.

The physically-backed methodology prevents investors from getting hurt by the contango structure of the gold market, contrary to ETFs using futures contracts.

GLDM offers the lowest expense ratio of just 0.18 among its peers. GLD, IAU, and GraniteShares Gold Trust ETF (BAR) have an expense ratio of 0.50%, 0.25%, and 0.20%, respectively. From a purely cost perspective, GLDM is the most competitive gold ETF, in my opinion.

GLDM’s average spread is 0.08% over the past two months, which is a touch lower than that of its competitor IAU, at 0.09%.

GLDM's average daily volume (over the past 45 trading days) is ~$4.5 million, which is much lower than that of IAU, at ~$126 million. But unless you are an institutional investor, liquidity conditions are sufficient.

According to the prospectus, stricto sensu, GLDM is:

Secure: The shares represent fractional, undivided interests in the Trust, the sole assets of which are physical gold bullion and, from time to time, cash.

Cost Effective: The ETF allows investors to buy gold at a much lower cost than if they had to purchase, store and insure their physical gold by themselves.

While I am aware of some concerns among some Seeking Alpha readers regarding the presence of physical gold in the vaults, it seems to me that the presence of gold in the vaults cannot be refutable. For investors preferring to be able to touch the actual gold, which is not possible in an investment in GLDM shares, owning physical gold may be a more suitable situation. The risk of loss/theft is, however, very real.

Orchid Research
5.6K Followers
Orchid Research focuses mostly on commodity and macro analysis, with a particular emphasis on the metals markets and China. We conduct research on supply and demand trends across commodities. We also analyse global macro dynamics and their reflexive interactions with the commodity complex. With 10+ years of experience in macro and commodity research, Orchid Research seeks not only to deliver unbiased views and accurate forecasts, but also to identify trade opportunities generating α.
Follow

Disclosure: I am/we are long BAR. I wrote this article myself, and it expresses my own opinions. I am not receiving compensation for it (other than from Seeking Alpha). I have no business relationship with any company whose stock is mentioned in this article.