My last report on Ultra Petroleum (UPL) resulted in a number of questions about Opal Hub pricing and Ultra's projected realised price for its production, so I figured I would go into more detail here.

Ultra's restructuring risk remains high despite near-term prices, as it may be challenging for long-term Rockies natural gas prices to average above what Ultra needs.

Opal Hub pricing has become more volatile (with significant price spikes), largely due to an Enbridge natural gas pipeline explosion in October near Prince George in British Columbia. This pipeline historically provides around 50% of the natural gas used in Washington, Oregon and Idaho.

Opal Hub pricing is affected since the reduction in available supply from Canada means that those states are attempting to pull more from the Ruby and Northwest pipelines that go through Opal. 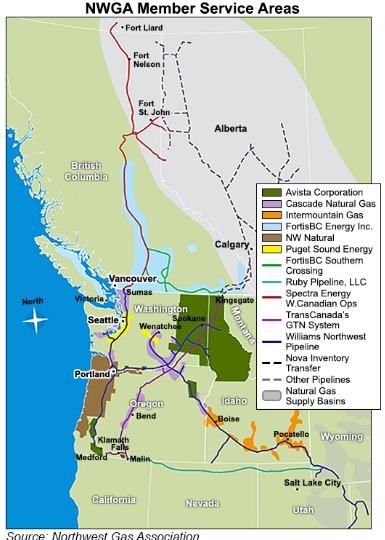 Enbridge has restored the pipeline to 85% of capacity, but since the pipeline typically runs at full capacity during the winter months, this constrains the export flows to the US. Exports from Canada to the US via the Enbridge Westcoast pipeline are also being affected by high levels of Canadian demand during the recent cold snap.

Thus between high Canadian demand and reduced overall capacity, exports to the US via the Westcoast pipeline may be reduced by close to 50% at this time. At the same time, regional Northwest US demand is higher than usual due to the winter storms, driving nearby hub (Malin, Opal, NW Sumas) prices up significantly, while production has been affected a bit by freezing temperatures as well. 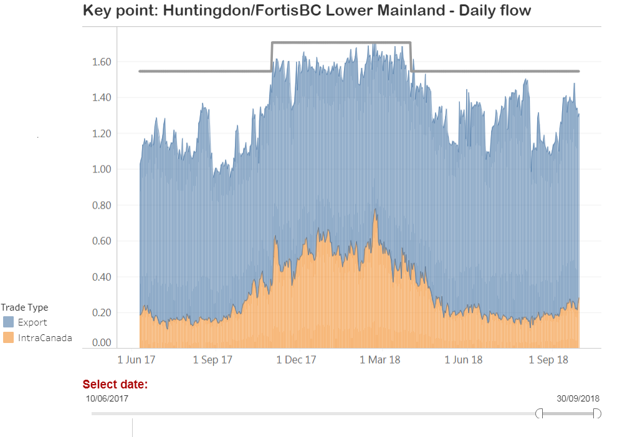 I will now look at what the changes in Opal Hub pricing may mean for Ultra's results. In Q4 2018, Opal Hub prices may have averaged around $4.45 per MMBtu. This is partially based on Wyoming government data.

That translates into a price of $4.76 per Mcf for Ultra's natural gas during Q4 2018 after applying the BTU factor mentioned in its presentation.

However, Ultra hedged most of its production (both via Henry Hub swaps and NW Rockies basis differential swaps) for Q4 2018, resulting in a hedging impact of negative $2.10 per Mcf (assuming 680 MMcf per day in natural gas production). Thus, after hedges, Ultra would be expected to realise $2.66 per Mcf for its natural gas in Q4 2018. The impact of oil/condensate (based on 5,000 barrels per day of production) and its associated hedges adds $0.31 per Mcfe to Ultra's realised price, making it an estimated $2.97 per Mcfe in Q4 2018.

In Q1 2019, the average Opal price may end up being around $4.50 per MMBtu. While Opal prices have soared above $10 recently, it will probably drop down to more regular levels later in February as the temperature in the Northwest returns to more historical levels. Even if Opal averages around $7 in February, the quarter average may end up at around $4.50 based on January actuals and March futures. This results in an estimated realised price of $4.82 per Mcf for Ultra's natural gas before hedges and $2.94 per Mcf after hedges. Ultra's realised price per Mcfe is estimated at $3.24 for Q1 2019.

Ultra is expected to generate around $31 million in additional revenue with a realised price of $3.24 per Mcfe (compared to $2.75 per Mcfe).

Realised Prices During Remainder Of 2019

After Q1 2019, Opal prices go down significantly since the Westcoast pipeline should have room for historical export levels after the winter season even if it isn't restored to full capacity yet.

Ultra will be basically operating at around breakeven cash flow (and slightly increasing debt due to the approximately $13 million per year in PIK interest) if it wants to maintain production over the next three years, so it does need an improvement compared to strip prices be able to deleverage.

Ultra is benefiting a bit (despite its hedges) from the near-term spike in Opal prices. However, its stock hasn't gone up since the effects of the pipeline issue should abate soon and the pipeline is expected to run at full capacity again well before next heating season.

That being said, I can see Ultra the argument for Ultra being worth a (very) speculative look at $0.64 per share. I believe there is a high chance that Ultra eventually ends up restructuring again, and it does need significantly higher realised prices and/or a significant improvement to its drilling costs and cost structure to be able to avoid that eventual fate. It may have some time (if covenant issues can be worked out) to wait for those potentially higher prices and work on cost improvements though.

Ultra Petroleum is only seeing limited benefit from high Rockies natural gas prices due to its hedges. It may gain around $31 million in additional revenue during Q1 2019, but the longer-term outlook for Ultra remains weak at strip prices. That being said, Ultra could be worth a highly speculative look at $0.64 per share as long as one is comfortable with the high risks associated with the company. Actual prices may end up differing from current strip prices, but natural gas production growth will need to slow and perhaps decline for Opal prices to average the $2.75 to $3.00+ that Ultra probably needs in the longer-term.

We are currently offering a free two-week trial to Distressed Value Investing. Join our community to receive exclusive research about various energy companies along with full access to my portfolio of historic research that now includes over 1,000 reports on over 100 companies.

Elephant Analytics
9.64K Followers
Author of Distressed Value Investing
Unique insight into distressed opportunities to target outsized returns.
Elephant Analytics has 15 years of analytical experience and unique skills in numerical analysis and practical mathematics. He achieved a top 50 score on the Bloomberg Aptitude Test measuring financial aptitude (out of nearly 200,000 test takers). He has also achieved a score (153) in the 99.98th percentile on the WAIS-III IQ test and has led multiple teams that have won awards during business and strategy competitions involving numerical analysis. In one such competition, he captained his team to become North American champions, finishing ahead of top Ivy League MBA teams, and represented North America in the Paris finals.

Elephant Analytics co-founded a company that was selected as one of 20 companies to participate in an start-up incubator program that spawned several companies with $100+ million valuations (Lyft, Life360, Wildfire). He also co-founded a mobile gaming company and designed the in-game economic models for two mobile apps (Absolute Bingo and Bingo Abradoodle) with over 20 million in combined installs.

26 Comments
To ensure this doesn’t happen in the future, please enable Javascript and cookies in your browser.
Is this happening to you frequently? Please report it on our feedback forum.
If you have an ad-blocker enabled you may be blocked from proceeding. Please disable your ad-blocker and refresh.