The new suppliers are:

I will not cover the accessories producers here but being sold through Ontario Cannabis Stores is likely to be a smaller event for those companies: There are many places to purchase cannabis accessories, and Ontario Cannabis Stores is only one potential outlet. Meanwhile, selling cannabis itself in Ontario requires a supply agreement with the province of Ontario - so access to the largest cannabis market in Canada depends on having this supply deal.

These six licensees are fighting for a share of Canada's largest cannabis market - and a market that will grow more quickly than the rest of Canadian cannabis over the next 3-5 years, as it is currently under-performing. 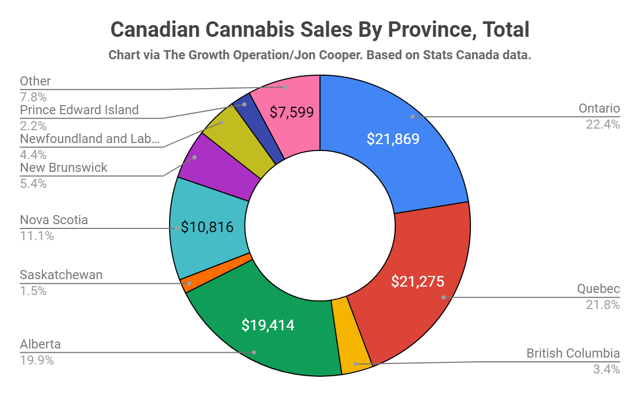 Through November, which I analyzed in a previous article, Ontario is the largest cannabis market in Canada with a 22% share of retail sales. This figure should disappoint. Ontario is a much larger share of the Canadian population than 22%:

Source: Author based on data from Stats Canada.

Ontario's low cannabis sales are, in my view, primarily the result of not having any cannabis retail stores. Instead, Ontario had a cannabis lottery that has been criticized by industry insiders. That lottery did not properly filter applicants by skill or financial ability to open and operate a cannabis store, and has already led to at least one lottery winner being stripped of their prize.

Based on these figures, 38% of Canadian cannabis smokers live in Ontario. But, during the first two months of legalization, only 22% of recreational cannabis was sold in Ontario. Thus, while the Ontario cannabis market is the largest in Canada, it should be even larger.

As the Canadian cannabis market matures and retail stores continue to open across the country, such as stores by Feb 19th IPO Fire & Flower (FAF.V), Ontario is likely to grow faster than the rest of Canada and ultimately reach ~38% of national recreational cannabis sales. This will provide an opportunity for licensed providers in Ontario to capture a portion of this potentially lucrative market.

Of the six licensees, I believe that this deal means the most for two companies, The Green Organic Dutchman and Indiva, and means the least for Pure Sunfarms and Whistler Medical. Both of the former two companies are gaining their first provincial supply agreement while the latter two companies already had access to the Ontario market through a parent or parent-to-be.

The Green Organic Dutchman: Back in October, I wrote about Aurora Cannabis backing out of their purchase of The Green Organic Dutchman. I noted that after the move by Aurora, TGOD looked much riskier due to not having cannabis production until mid-2019 and not having any provincial supply agreements. This left TGOD without short-term cannabis and without any pathway to the market.

Since the Oct 12th breakup, TGOD's shares have fallen over 40%, nearly three times further than the broader cannabis market fell in the post-legalization sell-out.

However, TGOD management has not been sitting still. Since then, construction has continued with a Feb 1st construction update providing clarity on built-out plans, moves into Europe, and the spin-off of TGOD Acquisitions Corp.

Winning a provincial supply deal in Ontario is a great first step for TGOD management to secure Canadian distribution in Canada for their upcoming cannabis production, due to ramp up to over 80,000 kilograms/year (run-rate) in the fourth quarter of 2019.

'Ontario has the largest population in Canada and is a critical component to TGOD’s national recreational rollout,' commented Brian Athaide, Director and CEO. 'This represents the first of many provincial supply agreements planned for our premium organic product as our domestic facilities near completion and production increases throughout 2019.'" 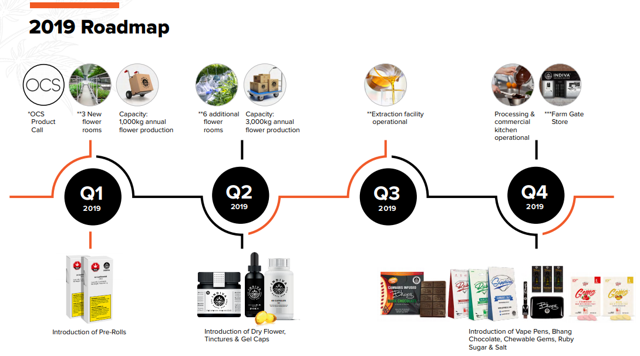 Indiva: The other largest winner in Ontario's announcement, in my view, is Indiva. Indiva is a very small cannabis producer based in Ontario, with a fully-diluted market cap of C$73 million based on Indiva's investor presentation. Indiva's production capacity this quarter is listed at only 1,000 kilograms/year and Indiva's press release suggests that the roll-out into Ontario will be for a limited number of products beginning April 2019:

This initial partnership will consist of two strains of pre-rolls, manufactured and shipped with care from Indiva’s London, Ontario facility. The products will be available on OCS.ca and to OCS Wholesale clients starting in April 2019.

'We are thrilled to be one of the first licensed producers that will have products on OCS shelves in time for the grand opening of all Ontario stores April 1st,' said Niel Marotta, President and CEO of Indiva. 'I’m very thankful for our team’s hard work in getting Indiva to this milestone.'"

Pure Sunfarms is a 50/50 joint venture between Emerald Health and Village Farms. Emerald Health already had a supply agreement with Ontario signed in September 2018, through which Pure Sunfarms products could reach the Ontario market. That said, this is still a victory for Pure Sunfarms, albeit a lesser victory compared to TGOD, in my view.

'Pure Sunfarms’ supply agreement with the OCS – our first with a provincial government distributor – is a tremendous step forward for our organization, putting our branded, quality products on the OCS web site and, soon, retailers’ store shelves, and into the hands of our consumers,' said Mandesh Dosanjh, President and Chief Executive Officer, Pure Sunfarms. 'The confidence of the OCS in Pure Sunfarms’ ability to reliably supply safe, consistent, quality products is a testament to the hard work of the entire Pure Sunfarms team who have been relentless in advancing our organization to this stage. We are thrilled to be working with the OCS in Canada’s most populated province and look forward to finalizing additional supplier agreements for other provinces and growing the Pure Sunfarms brand nationally.'"

This would be a relatively strong win for Whistler Medical, gaining access to a market much larger than British Columbia, except that Aurora Cannabis agreed to purchase Whistler Medical last month, as I covered on Seeking Alpha. That purchase hasn't closed yet, so this supply deal could be useful in the unlikely event that the purchase doesn't close. However, in all likelihood, this will just be a duplicate pathway to market since Aurora already has supply deals in at least six provinces including Ontario.

Whistler Medical, at least until it is acquired by Aurora, is privately-held.

For Invictus, this is its second supply agreement under its Acreage Pharms brand - not to be confused with Acreage Holdings (OTCQX:ACRGF). Invictus already had supply deals with BC, Alberta, and Saskatchewan but does not have any products for sale on British Columbia's cannabis site. Given that Invictus doesn't appear to be able to keep its products in stock in British Columbia, adding more supply agreements may not increase sales in the short term. Longer term, however, as production capacity ramps up, this deal with Ontario will enable Invictus to reach a larger market.

As shown above, Invictus is a small cannabis producer, with an implied cannabis production capacity of ~5,900 kilograms/year. While larger than Indiva, many of the same warnings apply here: Investors should be cautious investing in these smaller companies.

Finally, Sundial should also gain from this Ontario license. Sundial is based in Alberta and already has a supply agreement with its home province. Sundial is privately-held.

Overall, this is good news for each of the six licensed producers who gained access to the Ontario market. This is especially good news for Indiva and TGOD, both of whom have gained their first supply agreements. Each of the three independent, publicly-traded cannabis companies that gained Ontario supply deals are outperforming the broader cannabis market today, with TGOD and Invictus flat (over a 2% decline in HMLSF) and with Indiva up 5%.

To a lesser degree, this is also good news for Ontario consumers, who may have a bit more cannabis selection both online and in stores, when stores open in Ontario. Stores are expected to open in April including possible locations in Toronto, Brampton, and St. Catherines.

I run a cannabis investment newsletter community on the Seeking Alpha platform, called The Growth Operation. Among other features, members of this community receive:

Additional disclosure: I have positions, long and short, in other cannabis companies that were not discussed herein.