The Baltic Dry Index represents the cost of renting an ocean-going container ship to move goods from, say, Chinese factories to the Port of Los Angeles. The more stuff being made and sold, the higher the demand for such ships, and thus, the higher the price to rent one. And vice versa.

This is definitely one of the vice versa times. After rising to robust levels in mid-2018, the Baltic Dry Index has since plunged by about two-thirds. 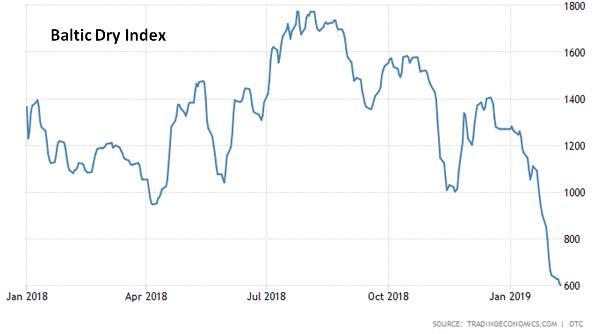 Here's a brief article on the subject from Friday's Wall Street Journal:

A slowing global economy, coupled with weak demand from China over the Lunar New Year and from Brazil after Vale SA's (VALE) iron ore disaster, is dragging shipping rates to near record lows, and few in the industry expect things to improve any time soon.

Brokers in Singapore and London said capesize vessels, the largest ships that move bulk commodities like iron ore, coal and aluminum, were chartered in the spot market for as low as $8,200 a day on Thursday, a $500 decline from Wednesday. Break-even costs for carriers can be as high as $15,000 a day, and daily rates in the capesize market hovered above $20,000 last year.

"Everyone is looking for a catalyst to push the market up, but it's not there," said a Singapore broker.

The Baltic Dry Index, which tracks the cost of moving bulk commodities and is considered a leading indicator of global trade, is down more than 50% since the start of the year.

The long Lunar New Year holiday in early February is one of the slowest periods in commodities trading as factories in China, the world's biggest importer of raw materials, shut down. But ship executives say the bulk seaborne freight business is more broadly suffering from the lowest demand in two years, while China's trade tussle with the U.S. is making the market more volatile."A long slowdown in the Chinese economy will hurt commodity demand and send shipping rates sharply lower," Bloomberg Intelligence industry analyst Rahul Kapoor said.The Vale iron ore disaster in Brazil in January, in which a mining dam burst, triggering a flood that killed at least 150 people and left close to 200 more missing and feared dead, created a new source of uncertainty.Vale has suspended production at a number of sites, removing 40 million tons of annual output, or 11% of the giant miner's total production in 2017.The reduced sailings could affect dry bulk owners, including China Cosco Bulk Shipping Co. Ltd, Norway's Golden Ocean Group and Greece's Diana Shipping Inc."The Vale void will be largely covered by iron ore shipments out of Australia," the Singapore broker said, "but Brazil generally commands higher freight rates so there is no good news."China has resumed importing soybeans from the U.S., a sign of progress in talks between Washington and Beijing. But the 540,000 metric tons of shipments from the U.S. in January were less than half the monthly average last year."If you are a bulk owner, you can no longer depend solely on China to make money, and that's a seismic shift," said a London broker.

So, there are some specific, possibly temporary things going on here. The US/China trade war is slowing shipments between those countries, while a Brazilian iron ore mine disaster is cutting shipments of that commodity for the time being.

Assuming the trade war ends and Vale's Brazilian mine recovers, it's reasonable to see this as the bottom for shipping rates - a forecast that shippers who need to double current prices just to break even fervently hope is true.

But there are also broader forces at work. The trade war isn't just a piece of political theater for the US. We really do need factories to come back home if we want to avoid a populist and/or socialist revolution. And next-generation manufacturing tech like 3D printers will, in any event, move production closer to end-users, lowering the need for at least some of today's shipping.

It's possible, in other words, that the whole free trade/mobile capital/cheap labor/long supply chain Age of Globalization, with its assumption of unlimited rich-country demand and plentiful cheap energy for transport, was just an artifact of a very specific time. It was so cheap and easy to move things around that building toys or TVs wherever labor was cheapest and shipping them to wherever the money resided made financial sense.

That might not be a permanent state of affairs, and if it's not, those giant ships won't be the only stranded capital out there.

John Rubino
2.73K Followers
John Rubino manages the financial website DollarCollapse.com. He is the co-author, with GoldMoney’s James Turk, of The Money Bubble (DollarCollapse Press, 2014) and The Collapse of the Dollar and How to Profit From It (Doubleday, 2007), and author of Clean Money: Picking Winners in the Green-Tech Boom (Wiley, 2008), How to Profit from the Coming Real Estate Bust (Rodale, 2003) and Main Street, Not Wall Street (Morrow, 1998). After earning a Finance MBA from New York University, he spent the 1980s on Wall Street, as a money market trader, equity analyst and junk bond analyst. During the 1990s he was a featured columnist with TheStreet.com and a frequent contributor to Individual Investor, Online Investor, and Consumers Digest, among many other publications. He currently writes for CFA Magazine.
Follow
1 Comment
To ensure this doesn’t happen in the future, please enable Javascript and cookies in your browser.
Is this happening to you frequently? Please report it on our feedback forum.
If you have an ad-blocker enabled you may be blocked from proceeding. Please disable your ad-blocker and refresh.