The United Kingdom is due to leave the European Union on March, 29, but with just less than two months left, there is not a deal yet in place with the EU. During that period of political turmoil, it is easy to understand why the vast majority of investors prefer to avoid UK stocks, especially those companies operating on the domestic market. However, I think that exactly such periods of uncertainty can deliver lucrative returns if we are able to focus on quality and turn off the noise.

Babcock International Group (OTCPK:BCKIY) is a British engineering and support services group which is currently traded at less than 7 times forward earnings. The company possesses expertise in four key sectors: marine, land, aviation, and nuclear. For example, the Group provides aircraft maintenance and operations for the Royal Air Force, trains the London Fire Brigade, operates a fleet of medical helicopters and refits the entire fleet of submarines in UK and Canada. The UK Ministry of Defence accounts for about 40% of the business.

One of the reasons Babcock International to be so cheap is because the investment public is assuming they are about to face the same troubles as several struggling British outsourcing companies. The most prominent example is the vast Carillion, construction and public services group, which filed for liquidation at the beginning of last year. Not long after other outsourcing firms, namely Serco Group Plc (OTCPK:SECCY), Capita Plc (OTCPK:CTAGY), and Interserve Plc (OTCPK:ISVJY)issued profit warnings and reported liquidity issues.

Now, let me outline a few differences between Babcock International and that bunch of companies which makes the former a compelling investment at current share price. First, all these other companies are now struggling due to their excessive exposure to the private sector where the competition is much more severe and the pressure on margin is highly intensive. On average, the portion of the revenue coming from public sector is between 30 to 40 percent. As concerns Babcock International, more than 80% the business is linked to the public sector – governments, ministries, and agencies.

Babcock generated 11 % adjusted operating margin (8 % reported) in 19H1 versus 3 % on average for the peer group. The reason is they predominantly bid for contracts where there is a high probability to be awarded a contract. In many cases like decommissioning of nuclear submarines, there is no other company in the UK which is capable of doing that. Babcock manages to secure a contract in almost 40% of all bidding contests they participate.

The company is also bolstered by the barriers to entry in specialized areas like technical support for air bases and nuclear engineering. Much of the business linked to maintaining and operating critical infrastructure is non-discretionary, and so insulated from drastic budget cuts.

An important moment in my analysis is the examination of revenue recognition process. Profit and revenue recognition on contracts is a key estimate made by management in this industry. Estimations are required quite often due to the fact there are usually pre-contract costs like specialists training or capital expenditures needed to deliver the service to the customer afterwards. Then, the management executes an estimation of the stage of completion of the contract.

Due to these estimations, a significant discrepancy between reported profit and cash flow may appear. This can be the case when the management overestimates the revenue generated by the portfolio of contracts or underestimates the associated costs.

In order to analyze how aggressive are Babcock’s accounting practices, we can use the ratio for conversion of EBITDA into cash generated from operations. Basically, it shows how much of the reported profit from operations is converted into real cash. 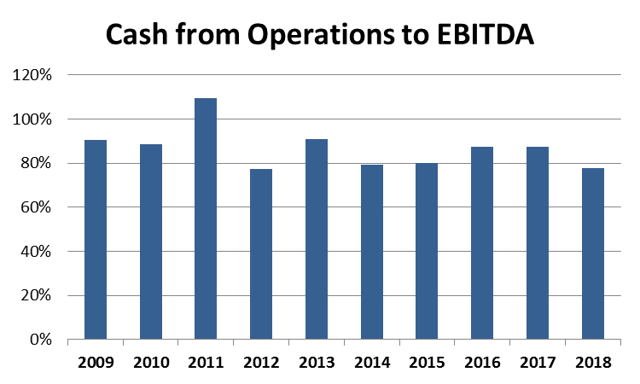 In the last decade or so the cash conversion was strong at 80% or above. It could have been even higher if the contributions to the company’s pension fund have not been persistently above those recognized in the income statement. In FY18 that excessive contribution was close to 50 million pounds.

Due to the historically low interest rates, retirement benefit obligations have exploded and the management is taking steps to address that by setting aside more cash in the pension funds. If/when the interest rates start to go up again, these contributions will cease.

And on top of that, larger working capital has been necessary to support the incremental revenue.

Another metric which I find useful is the ratio of contractual work receivables to revenue. If the bigger contracts of Babcock International are healthy, the receivables amount should increase gradually as the business grows. 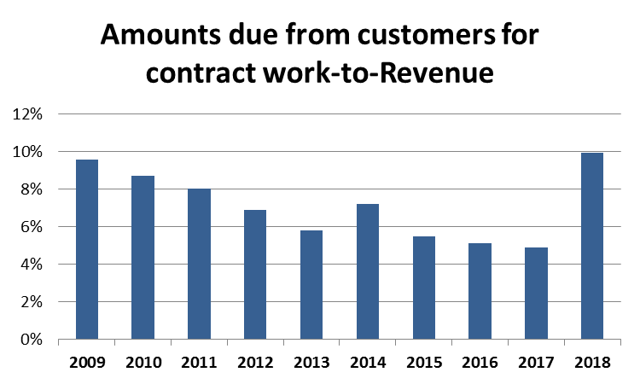 The ratio was in a secular decline until last year. The spike in FY18 is mainly due to the pre-contract work done for the huge FOMEDEC contract which covers French military air training activities. I am eager to see what will happen with the ratio in FY19. According to the management working capital is expected to return to previous levels very soon once we enter the effective date of the contract. On the other hand, if the ratio is persistent at 10% in upcoming reporting periods or even above this will be a red flag.

Finally, let’s have a look at the debt burden of Babcock International. Unlike the peer group where the debt pile has been ever increasing, Babcock saw their highest net debt-to-EBITDA ratio back in 2015 right after the 1 billion pounds acquisition of search and rescue helicopter company Avincis. In the following years, the management has been carefully reducing the debt while the business has been growing. Net debt is communicated to fall to below 1 billion pounds by March 2019 when ends the financial year in UK, or 1.4 times anticipated EBITDA. 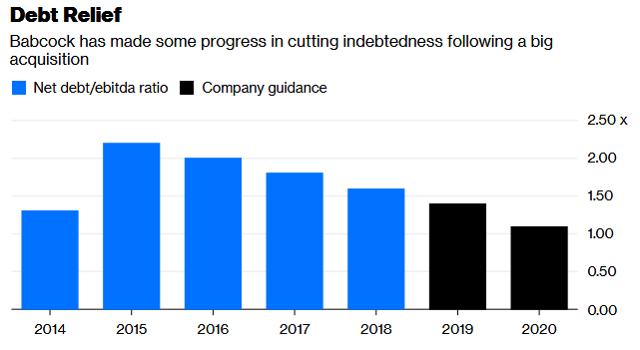 Of course, there are challenges. Apart from the Brexit uncertainty, a lucrative contract for Queen Elizabeth Aircraft Carriers Project is about to end. This has been accompanied by job cuts and restructuring charges recently which added to the overall uneasiness.

But if the marine sector is expected to face challenges in near future, the situation is already difficult for the nuclear business of the Group. They recognized one-off charges related to Magnox decommissioning contract where a recent change in government policies urged an insourcing of some activities while the outsourcing of others is temporarily suspended.

I would agree that there is no apparent catalyst to change this negative perception in the short-term. But the quality is there and the reality is in many cases Babcock International delivers sophisticated services.

They are unfairly put in the same bucket with the likes of Capita, Serco and Interserve. The type of business is quite different and far superior in terms of margins, barriers to entry and switching costs. The evidence is the company has been successfully increasing sales and EPS in the last seven years.

Babcock generated more than 1 billion pounds free cash flow in last five years which were used as a source to fuel growth, repay debt and fund dividends. The investors are about to receive north of 5% dividend yield at current share price level while the payout ratio is below 40%.

The stock requires attention due to the exceptional business and the attractive share price. If an investor is patient for some time, he should be rewarded handsomely once the impact of uncertainty surrounding the UK and the professional services sector has faded away.

Rational Investor
67 Followers
I have 5-year experience in the field of investments and capital markets. I am interested in companies with solid business model which have opportunities for growth, traded at fair price.
Follow

Disclosure: I am/we are long BCKIY. I wrote this article myself, and it expresses my own opinions. I am not receiving compensation for it (other than from Seeking Alpha). I have no business relationship with any company whose stock is mentioned in this article.