We wrote about GlaxoSmithKline (NYSE:GSK) a few weeks back and stated that we remained watchful of the firm's dividend. Glaxo has plenty of debt on its balance sheet so the $4 billion dividend it needs to shell out every year will continue to come under scrutiny. We have consistently stated that Glaxo's dividend is safe as long as it can keep its momentum going. Furthermore, now that we have year-end numbers, we have more clarity as to where we believe earnings are headed in fiscal 2019.

In saying this, there is still some uncertainty regarding how much sales will be affected by the pending sales drop-off in Advair. The fall-off here though has been earmarked for some time now meaning Glaxo has had ample time to pivot. We can see solid fundamentals for example in areas such as HIV, Vaccines, Respiratory and obviously the pipeline.

In 2019, top line sales grew by 5% and adjusted earnings per share increased by 12%. These numbers really helped free cash flow numbers in 2018. Free cash flow grew by 60%+ on a rolling year basis. This growth obviously took a lot of pressure off that multibillion-dollar dividend payout.

As long as the forward-looking fundamentals remain intact, we will remain long this stock. Here are three areas we continue to remain encouraged about. 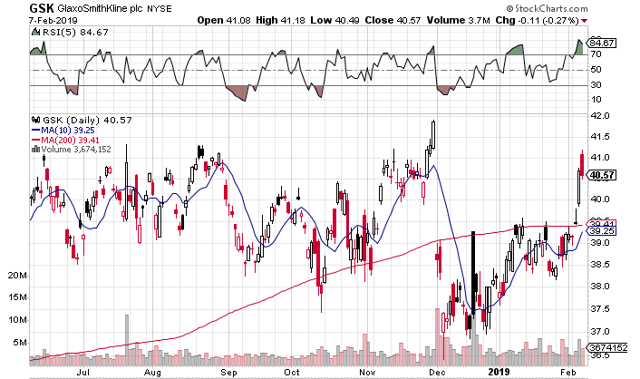 Therefore, to sum up, although we do not see any alarm bells at present, Glaxo operates in a sector where things change at a rapid pace. With respect to the pipelines, it is all about the numbers. The firm now has 16 candidates in the oncology segment which again brings diversification to the table. We will remain watchful of trends but there was nothing in Q4 that would make us doubt the stability of the dividend or potential capital appreciation of the share price from here. Remaining long.

Disclosure: I am/we are long GSK. I wrote this article myself, and it expresses my own opinions. I am not receiving compensation for it (other than from Seeking Alpha). I have no business relationship with any company whose stock is mentioned in this article.