A while ago, I introduced readers to Investor AB (IVXSF; OTCPK:IVSBF), a Swedish holding company with quite a track record. While Investor AB is probably one of the better known companies of its kind, certainly the best known Swedish. Yet there is another, similar if smaller company from the same country: Industrivärden AB (OTCPK:IDTVF;OTC:IDDTF).

Please note that wherever necessary I am basing my calculations on exchange rates as of January 8th (1 USD = 9.23 SEK).

Industrivärden was established by Handelsbanken in 1944 with the purpose of distributing shareholdings in industrial companies the bank had acquired to its shareholders. Still, today, it owns a portfolio of equity investments in large Swedish companies, many of which have a strong international presence. The company sees its role as that of an active owner with a long-term time horizon. It does so among other things through board representation.

Industrivärden has a track record of outperforming its benchmark index. 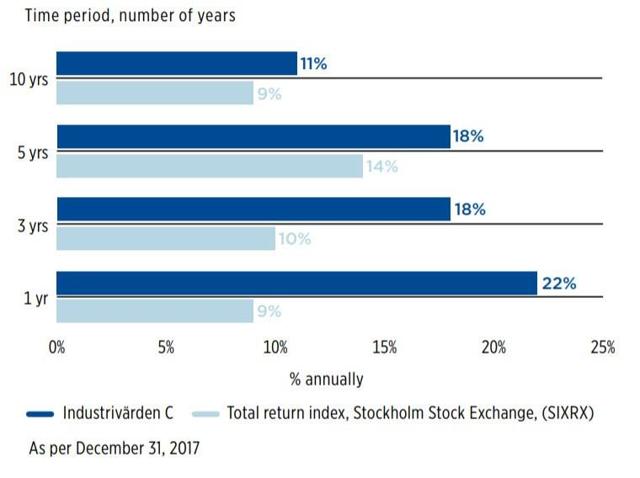 There are two classes of shares: Class A and - somewhat counterintuitively - Class C. Class A shares, which have tenfold voting rights, can be converted to class C shares upon request.

Industrivärden's portfolio is made up entirely of publicly traded Scandinavian (at the moment in fact exclusively of Swedish) companies. Other than several similar companies such as Investor AB Industrivärden does not invest in majority or minority stakes in non-public companies.

Currently, the portfolio includes positions in (ranked in order of the value of the position as of January 8th):

Sandvik AB (OTCPK:SDVKF; OTCPK:SDVKY) is a Swedish producer of specialized steel products such as tools for cutting metal, mining equipment or various kinds of drills. Industrivärden owns 12.1 percent of the company.

The position is currently worth $2.4 billion.

Svenska Handelsbanken AB (SVNLF; OTCPK:SVNLY) is a Swedish universal bank with branches all over Scandinavia as well as a strong presence in the United Kingdom.

There are different kinds of shares. Industrivärden exclusively holds Class A shares. The company owns 10.4 percent of Handelsbanken.

The position has a value of $2.092 billion at the moment.

The company is not to be confused with Volvo cars which is a part of Chinese Geely (OTCPK:GELYF; OTCPK:GELYY) nowadays, after being sold to Ford (F) in 1999. Geely is also the largest shareholder of Volvo AB at 8.23 percent of outstanding capital, yet Industrivärden (6.87 percent of outstanding capital) holds the larger percentage of voting rights (22.23 percent compared with Geely's 15.67 percent). This is possible due to - while both companies holding Class A as well as Class B shares - Industrivärden holding the majority of its equity stake in Class A shares which hold more voting rights.

Industrivärden's stake currently has a value of $2.062 billion.

Essity Aktiebolag (OTCPK:ETTYF; OTCPK:ESSYY) is a Swedish manufacturer of hygiene products, especially of hygiene papers. Among the company's brands are the likes of Zewa and Tempo, the latter of which is synonymous with hygiene paper in my home country of Germany. The company was spun off from SCA in 2017.

There are two different classes of shares. Industrivärden holds both Class A and Class B shares. The company therefore controls 29.9 percent of voting rights despite only owning 9.5 percent of Essity.

Currently, Industrivärden's stake in Essity has a value of $1.844 billion.

Stockholm based LM Ericsson Telephone Company (ERIC; OTCPK:ERIXF) is one of the leading networking and telecommunications companies.

There are different classes of shares. Industrivärden holds both Class A and Class B shares. It controls 2.6 percent of capital and 15.1 percent of voting rights.

The position currently has a value of $764 million.

Svenska Cellulosa Aktiebolaget (OTCPK:SVCBF; OTCPK:SVCBY)is a Swedish paper, pulp and timber manufacturer. The company is one of the largest owners of forest land at 2.6 million hectares (for comparison: this is close to the whole size of the state of Massachusetts).

There are two classes of shares. Industrivärden holds both Class A and Class B shares. It owns a 9.5 percent equity stake and holds 29.7 percent of voting rights.

Currently, the position has a value of $580 million. Please note that this figure is based on the price of Class B stocks as Class A shares are not publicly traded.

Skanska AB (OTCPK:SKSBF) is a construction and real estate company. The company operates in both commercial and residential markets as well as infrastructure.

There are two kinds of shares. Industrivärden holds both Class A and Class B shares. The company holds 6.9 percent of Skanska's equity and controls 23.9 percent of voting rights.

Industrivärden's stake in Skanska currently has a value of $497 million. Please note that this figure is exclusively based on the price of Class B stocks as Class A shares are not publicly traded.

ICA Gruppen AB (OTC:ICCGF) is a Swedish supermarket operator. The company has about 1,300 markets in Sweden.

Industrivärden's 7 percent stake in ICA Gruppen currently has a value of $430 million. The company plans to divest this position in May 2019.

There are two share classes. Industrivärden holds Class A shares which have tenfold voting power of Class B shares. Hence it controls 11.8 percent of voting rights with a mere 4.3 percent equity share.

The position currently has a value of $160 million.

Based on its current market capitalization of $8.801 billion (based on the share price of class A and C shares at the Nasdaq OMX), Industrivärden trades at a discount of 13.14 percent to its net asset value.

While this certainly appears quite attractive, there are also some risk factors which I recommend investors take into consideration.

Especially, investors should take into consideration, that the concentration of the company's portfolio to exclusively Swedish enterprises creates a large geographical risk (although it should be noted that the majority of portfolio companies does operate internationally). More so as Sweden is not a member of the eurozone and, therefore, has its own currency, the Krona, which poses an additional currency risk.

One should also keep in mind that often the national stock markets of a country are highly correlated to that country's overall situation. Thus, despite the international operations of many of the companies of which Industrivärden's portfolio consists, it could be affected significantly if the overall Swedish market was to take a hit for whatever reason.

Lastly, I would like to caution that discounts for holding companies are far from unusual, although in the case of Industrivärden, the portfolio consists entirely of listed assets.

Industrivärden enables investors to acquire a portfolio of a wide range of mostly Swedish companies from different sectors at an attractive price. Other than the larger Investor AB the company does not own stakes in private companies or even private equity funds which makes it easier to evaluate its portfolio.

I would recommend the stock for investors who would like to gain exposure to the Swedish stock market yet do not want to do so via mutual funds or ETFs instead relying on a local management team with insight into market and companies. If investors are, however, interested in any particular ingredient(s) of the company's portfolio but rather less in others, it might be the better option to simply purchase the stock(s) you are interested in directly.

Disclaimer: All research contained in this article was done with utmost care. However, I cannot guarantee accuracy. Every reader is advised to conduct his own due diligence and research.

Christoph Liu
729 Followers
I am and have been for some time interested in various investment-related topics. Therefore I started investing a few years ago. At this moment I do exclusively invest using own money. My focus is primarily on stock market investments with a long term investing perspective. Particularly, I invest in companies with a strong and fortified market position and stable profits.
Follow