Express is a specialty retailer that focuses on professional attire for young adults entering the workforce. It also ventures into other apparel segments such as extended sizes and casual wear. Stocks have declined recently due to investors’ worry over margin levels. Express’s retreatment from Canada also signals a failure to expand its footprint internationally.

I believe Express is significantly undervalued due to its value proposition, unique niche, and management strategy. It is trying to become the new face of apparel retailer by test-opening technologically advanced stores that are customer-facing. It is also trying to maximize margins through foot-print optimization, such as converting their full-price retail stores to outlet stores and executing on its LCI (low-cost initiative) including a diversification amongst its suppliers.

Significant value to can be unlocked through a combination of the following ways: lowering discount to improve sales, lowering COGS (raw materials and occupancy costs) to improve gross margin, and lowering SG&A expense to increase EBIT. Express Inc. is currently trading at 0.095 EV to sales ratio. This means, for every $100 dollar the business makes in sales, the investors of Express are only paying $9.5 dollars for that amount. The concern here is that Express cannot effectively translate that $100 dollar in sales down to net income to prove its profitability to the investors.

The leverage I am mentioning here is its EV to sales ratio, not its debt level as it carries little long-term debt. Comparing two companies side by side with the exact same EV/sales ratio and P/E ratio, we can see how a company that is leveraged on its EV/sales ratio can outpace unleveraged companies significantly under the right circumstances.

First, consider two companies both trading at $20 dollars per share, both with a P/E ratio of 10. One company has significantly more sales and is trading at EV/sales of 0.1, while the other company only has modest sales numbers and is trading at 0.5 EV/sales. The reason that these companies are trading at the same P/E is that the expenses (including COGS etc. to simplify the formula) is weighing heavily on company A on a percentage basis. 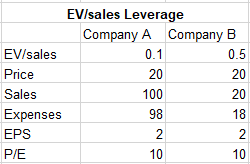 Now, let’s look at what happens when both of the companies increase their sales by 3% while everything else stays stagnant. 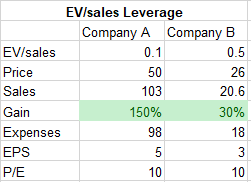 Company A's stock price skyrockets by 150% while Company B only gets a slight boost of 30%. This is because company A is leveraged in its sales on a basis of 5-to-1 compared to company B. It is obvious that Express is company A in this story, and Gap, American Eagle, Tailored Brands, are other major apparel retailers with income statements more like company B. Things could work in the opposite way as well, however, with a clear strategy by the management and a proof of working catalysts in place (lease terms, store conversion etc.), I think the upside is much more favorable here.

Buyback: Buybacks will be helping investors in gaining a bigger share of the company.

Sales growth: Sales are trending in the right direction as management attempts to improve the footprint of its customers. Online sales are growing at a steady rate, which will continue to improve its top line.

Cost cutting: Low-cost initiative is proving to be a success. Although temporary costs such as shipping fees are weighing on the company’s costs structure, the company should enjoy a long-term benefit from its inventory management due to this ship-from-store program.

Management Direction: Management is clear on their goals to produce effective results, they are actively looking for ways to improve their margins. Several concept stores have been rolled out in New York and Denver to attract new customers as the company continues to improve on its store technology.

Niche: I have seen articles stating that Express lacks an identity when compared to brands like American Eagle. I would disagree. Express is clearly focused on young adults entering the workforce and is offering value at an attractive price. It is a discount retailer with a strong value proposition for young professionals. I usually have a harder time telling the difference between GAP’s brands and American Eagle. Express has also been increasingly focused on women, extended sizes, and fashion. NBA relationship for men should be increasingly popular as well. As sports betting become more prominent in the US, sports associations like the NBA will receive more attention and perhaps generate bigger buzz for Express.

Concept store testing: While concept stores are showing signs of strength, they can eat up capital expenditures quite rapidly and lead to further margin compression.

This company is trying everything in its power to improve margins, drive sales, increase customer retention, improve technology, and reinvent in-store experiences for retailers. The valuation is not representing a growth story, but quite the opposite. EV/sales is below 0.1, EV to EBITDA is at 1.5, and the company has practically negligible long-term debt. While Express is indeed having a hard time translating sales into net income, investors are disregarding the potential of a competent management team. Management is aware of all the margin pressures AND is testing out innovative ways to drive traffic while improving margins. Regardless of the short-term results, their effort is at least admirable. Obviously, the ultimate admiration should derive from numbers, but I think now is a good entry point for the stock with quite a bit of safety.

Calculation: Using the management’s guidance, I have modified the sales number and COGS to arrive at the targeted net income of around $16 EPS (guidance is between 11 to 21) for Q4, which results in a LTM P/E of 17 (using current price of 5.3 and expected shares outstanding of 70 million diluted). What is interesting, however, is when I project the earnings out 1 year, I get significantly different results.

To project FY’s earnings, I simply copy and pasted everything, acknowledging that I cannot predict the sales trend of a company in any given year. Then I decreased the COGS by 3% (I left the SG&A cost static). This is an acknowledgment to the management’s Low-cost initiative to target a total cost saving of 44-54 million by the end of 2019. Since share buybacks are also a core strategy of the management, I am taking it into account when calculating EPS. The end results from simply decreasing the COGS by 3% and reducing the outstanding shares by 3 million effectively slashes the P/E ratio by over half. EXPR will be trading at around 7 times P/E ratio in fiscal 2019 according to my projections. I have also further discounted the projected net income by 15% to accommodate for margin of safety purposes.

If we assume that EXPR will be trading at a modest 10 P/E ratio, we can expect a gain of around 30% for its capital appreciation. This explosive valuation difference can be explained in its EV to sales value, which is currently at around 0.09, any small changes in its margins will result in major unlock of value.

Express is a very well-established apparel retail store and has a strong presence in the united states. The numbers are showing huge potential, and the investors are not buying into it. I think the stock is extremely overlooked due to its small market cap. I think 2019 will be a big year for this tech-focused, well ran apparel retailer, and patient investors will be handsomely awarded. I also think I was using very conservative numbers for shares outstanding, sales, and cost savings, which could contribute more to the upside.

Personally, I have built up 1/3 of my target position while waiting on the Q4 result and management's explanation for CEO's step down to see if my investment thesis still holds true and if there are any extraordinary things to look out for.

Disclosure: I am/we are long EXPR. I wrote this article myself, and it expresses my own opinions. I am not receiving compensation for it (other than from Seeking Alpha). I have no business relationship with any company whose stock is mentioned in this article.